The 2014 Chevrolet Malibu Stop and Start system in details

The 2014 Chevrolet Malibu arriving in dealerships this fall will be the first midsize sedan sold in the U.S. to offer fuel-saving stop/start technology standard on its 2.5L engine base model.

The Malibu has an EPA-estimated 25 city and 36 highway mpg representing a 14 percent improvement in city fuel economy compared to previous model.

Stop/start technology helps customers conserve fuel by automatically shutting off the engine when the car comes to a stop, such as at stoplights. The engine automatically restarts when the driver takes his or her foot off the brake. During engine restarts, an auxiliary 12-volt battery powers electric accessories such as heating and air conditioning, power windows and radio. 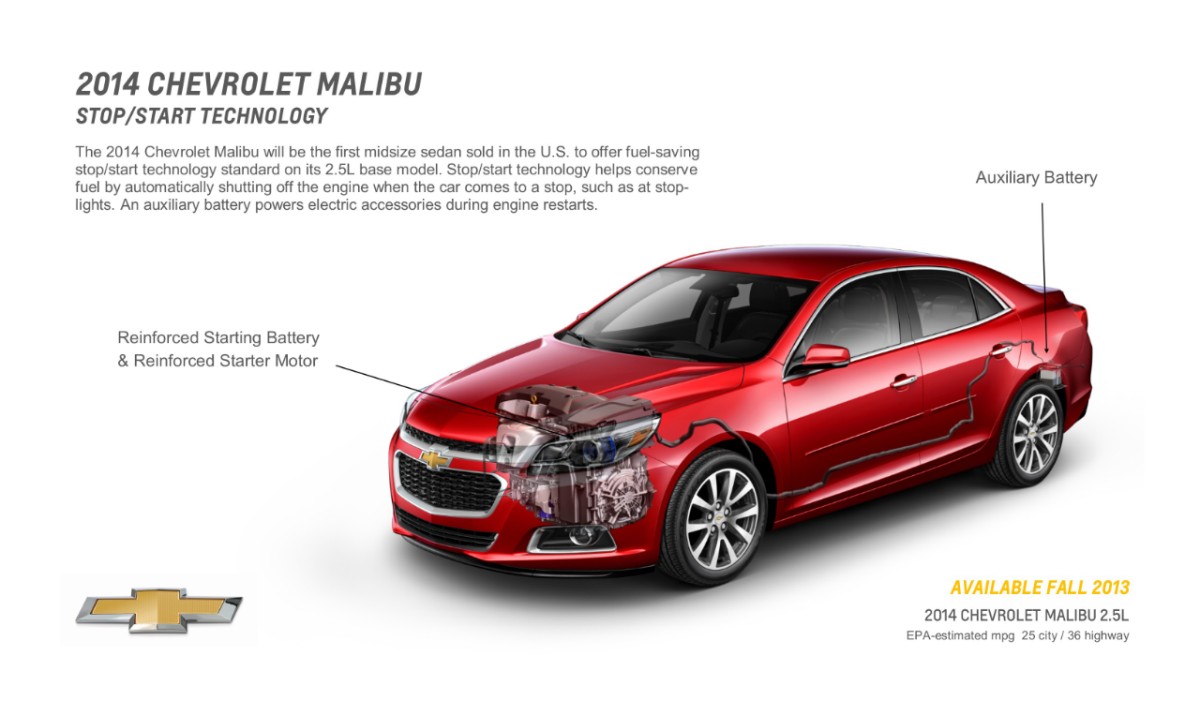 “The key was to apply the knowledge we gained from our eAssist technology,” said Todd Pawlik, Malibu chief engineer. “By leveraging knowledge from the stop/start system we use on eAssist, we were able to significantly improve city fuel ratings by 3 mpg, or 14 percent on Malibu’s entry-level 2.5L model, compared to the 2013 model.”

Malibu’s stop/start system monitors – among other things – vehicle speed, climate control system operation and the force a driver applies to the brake pedal, to determine whether it is efficient to shut off the engine in certain driving conditions, such as stop-and-go driving.

When the Intake Valve Lift Control system operates in low-lift mode, the engine pumps only the air it needs to meet the driver’s demand. The system switches to high-lift mode at higher speeds or under heavy loads, providing the full output capability of the engine. The variable intake valve actuation enhances efficiency and helps lower emissions, while also boosting low-rpm torque for a greater feeling of power at lower speeds.

This Malibu is using a specific Johnson Controls AGM battery combined with an auxiliary 12V battery for managing consumers when engine is off. Using a dual battery is according to me the best solution for doing Stop and Start, one for frequent charge and discharge and one for regular consumers like radio, wipers … But it often needs a DC/DC to use both battery with a single alternator. Do you think having 3 components instead of one is not to costly and risky from a dependability point of view? Indeed the start ability is a key feature from the customer point of view. What if the system is not robust enough?