Global automotive supplier DENSO Corporation has developed a new diesel common rail (DCR) fuel injection system with the world’s highest* injection pressure of 2,500 bar. Based on DENSO’s research, the new system can help increase fuel efficiency by up to 3 percent while also reducing particulate matter (PM) by up to 50 percent and nitrogen oxides (NOx) by up to 8 percent. This is compared to DENSO’s previous generation system. The new DCR system will be launch-to-market later this year on passenger, commercial, agricultural and construction vehicles worldwide. 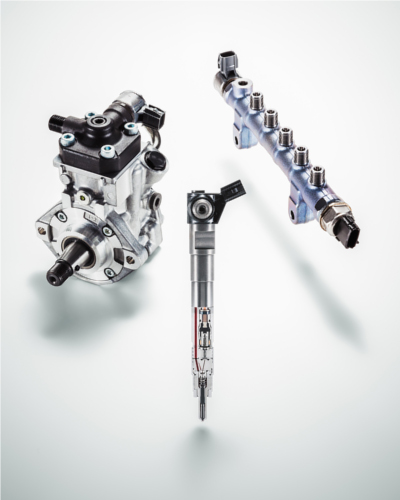 DENSO is working on development and commercialization of a 3,000 bar diesel common rail system. The company will continue to develop products and technologies that help improve the performance of diesel-powered vehicles to reduce its impact on the environment.

It seems that a race towards increased fuel pressure technology is on-going between tier 1 suppliers. Choice of pump and injector technologies is key in this race. Do you think piezoelectric injectors and 3 lobes pump will be able to overtake 3000 bar? Or any other technology will be able do so?