A DCT equipped with a torque converter developed by GM

Though dual clutch transmissions have been very successful in sports- and performance-oriented passenger cars, the feedback from buyers of luxury cars and family vehicles has not always been so positive. Criticisms have centered on drivability and launch performance, particularly in North America, where drivers are accustomed to the extreme smoothness of planetary automatics and CVTs. 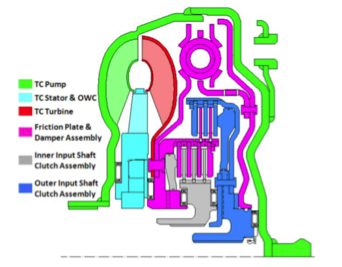 Intent on combining the DCT’s fuel efficiency with a conventional automatic’s ultra-smooth driving characteristics, GM engineers presented a paper at this year’s SAE Congress proposing a seven-speed DCT working behind a hydraulic torque converter in place of the conventional flywheel. As well as improving launch quality, the DCTC arrangement would also counter the other perceived drawbacks of DCT − its lack of sustained creep ability on grades, and its launch shudder and limited thermal capacity. The GM researchers also cited as a benefit the proposed transmission’s lower demands on its lubricant when compared to a conventional wet clutch DCT (wDCT): “Additionally, for wDCTs, high quality lubricating oil is required to achieve adequate friction and cooling characteristics which requires interval changes, leading to increased initial and routine maintenance costs.“

In terms of operating strategy, the torque converter (TC) is only used when launching from rest in first gear. After that, the lock-up clutch (TCC) remains engaged, although there is flexibility to allow slip of around 75 rpm to mitigate gear rattle and facilitate the use of low engine speeds for improved fuel efficiency.

The TC design investigated by the GM engineers is smaller than a conventional TC, but the housing containing the TC and the twin multiplate clutches is about 25 mm longer axially than on a standard DCT. In addition to the main benefit of eliminating the risk of launch shudder, as the shifting clutches do not slip, the authors cite other potential advantages of the arrangement. These include improved transient response and acceleration (thanks to the reduced inertia), the decoupling of the engine and transmission to allow engine idle without the aid of a clutch, and torque multiplication to improve engine starting under stop-start operation.

The latter will help ease some of the complex compromises surrounding dual mass flywheel design and NVH under restart, say the engineers, and DCTC users will perceive quicker vehicle acceleration response following an auto restart from rest.

On the all-important question of fuel economy, GM accepts that there will be extra energy losses in any torque converter. However, the paper shows that with the extra flexibility provided by the TC, the final drive ratio can be adjusted to derive maximum benefit from the TC’s ability to deal with NVH issues and to allow lower engine speeds through controlled slip. This is a useful advantage for the latest-generation downsized and downspeeded engines.

“Steady state operation at lowered transmission input speeds and high loads is made possible by controlled slip to attenuate rattle or provide NVH isolation which is not possible with dry clutches without loss of torque transfer or thermal concerns,” says the paper. “Drive quality is enhanced further in the engine downspeeded region by means of the torque converter facilitating improved torque transfer compared to dry or wet clutches alone. When a downshift is necessary while operating at low speed (around 1000 rpm transmission input), the TCC can be fully released, causing engine speed to flare, lower SR (speed ratio) to create torque multiplication, all the while engine torque capability is increasing. This leads to improved vehicle acceleration when requested, but also enables operating in a region that improves fuel economy.” 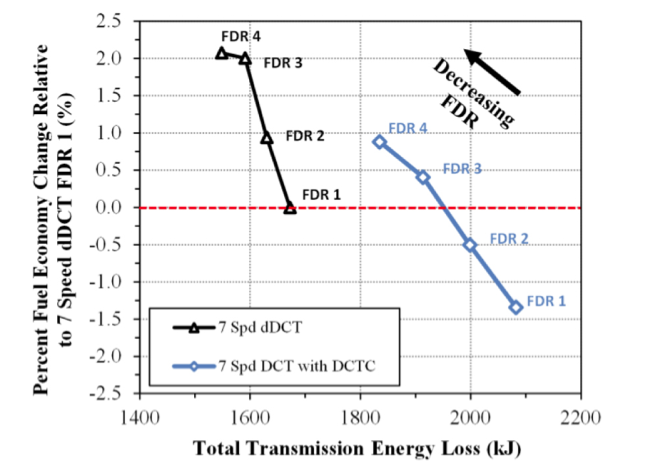 Overall, says GM, the most extreme of the final drive ratio options investigated allows the DCTC to actually improve (by 0.25 percent) on the fuel economy of a dry clutch DCT, with further potential improvements utilizing still-taller final drive ratios. Compared to a six-speed planetary automatic, the economy benefit is between 1 and 2 percent but, as the engineers explain in their summary, more is possible:

“The improved drive quality possible with the DCTC’s torque converter can enable aggressive shift and TCC pattern constraints that were shown to provide a 0.25 percent increase in fuel economy. A further increase in efficiency for a DCT utilizing a torque converter would be to relocate the shifting clutches of the DCTC concept to inside the transmission structure. The DCTC concept or use of a torque converter with shifting clutches internal to the transmission structure has the potential to be an enabler for DCT technology to achieve improved fuel economy and drive quality.”