The ADEPT project was launched in 2013 to demonstrate the potential for 48V based intelligent electrification in delivering full hybrid-scale fuel efficiency from a cost-effective package. As the project approaches its mid-point, the research team – led by Ricardo and including Ford Motor Company, Controlled Power Technologies (CPT), the European Advanced Lead Acid Battery Consortium (EALABC), Faurecia and the University of Nottingham – has completed the build of the first functional integration prototype ADEPT vehicle. 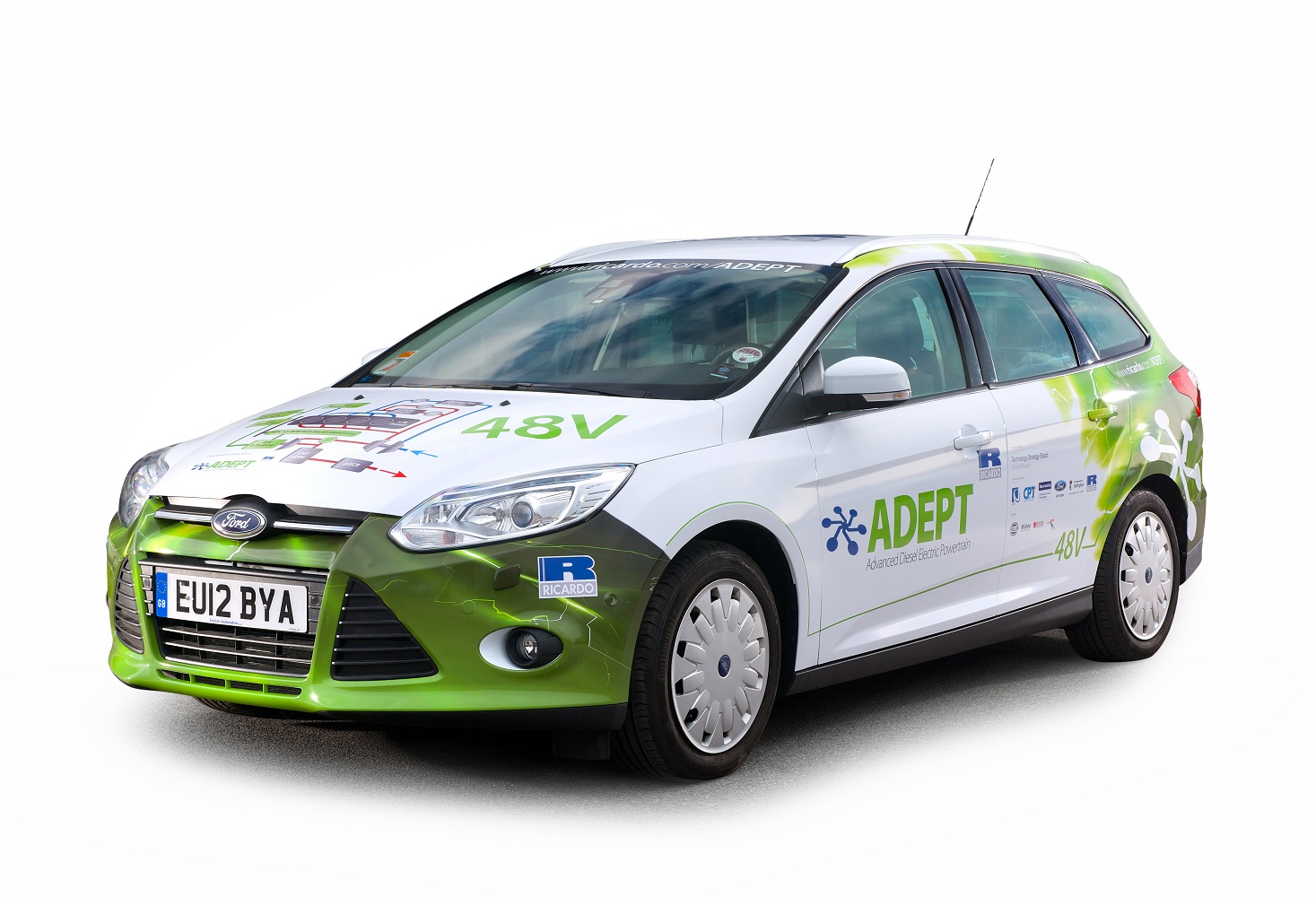 Based on a Ford Focus Estate, this ADEPT prototype incorporates a 48V electrical architecture, a SpeedStart 10kW (later to be upgraded to 12.5kW) belt integrated starter generator and TIGERS turbine integrated exhaust gas energy recovery system, both switched reluctance machines supplied by CPT, and a lead carbon battery pack provided by EALABC. The supporting systems for electrical and vehicle integration include a 12V-48V DC-DC converter and a Ricardo hybrid supervisory controller. With a planned completion of early 2016, the ADEPT project is supported by funding from the UK’s innovation agency, Innovate UK (the Technology Strategy Board), with balancing contributions from the project partners. 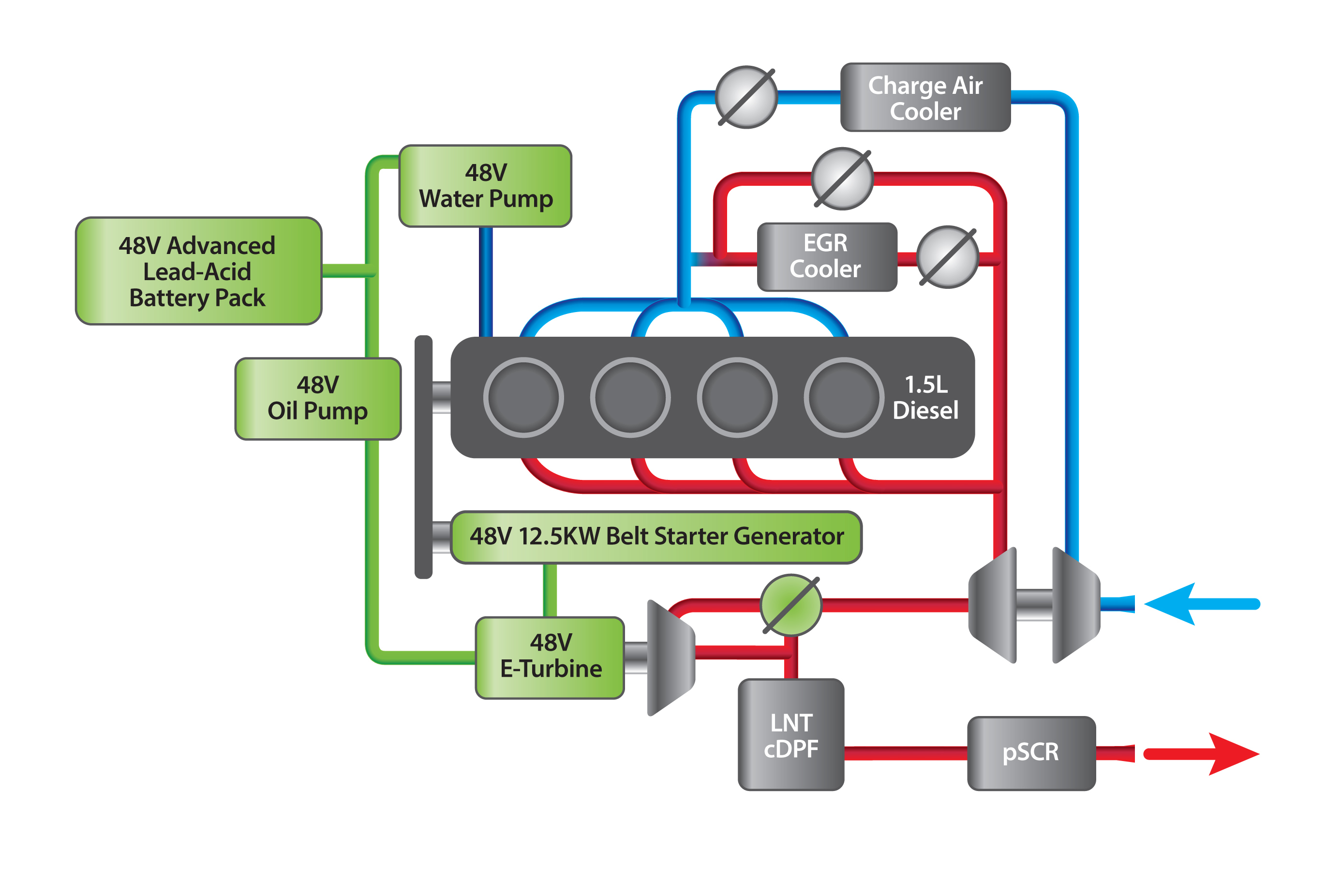 Engine downsizing through charge boosting is a well-recognized means of improving internal combustion engine fuel efficiency, by increasing the proportion of the drive cycle at which the powertrain operates within or close to the region of peak fuel efficiency of its operating map. An effective limitation on downsizing, however, is the delivery of acceptable driveability characteristics and launch performance. In the earlier ‘HyBoost’ project based on a similarly sized gasoline vehicle, Ricardo and its partners demonstrated fuel economy benefits equivalent to a full hybrid – but at a projected cost premium of less than a diesel. With the ADEPT project, the research team aims to demonstrate a powertrain with uncompromised performance and less than 70 g/km CO2 emissions as measured over the European Drive Cycle, but at a projected production cost lower than a comparable full hybrid electric vehicle.

“Intelligent electrification offers extremely promising benefits in terms of the cost-effective reduction of vehicle CO2 emissions and improved fuel economy with uncompromised performance,” commented Ricardo chief technology and innovation officer Professor Neville Jackson. “Ricardo and its research partners in this area have already demonstrated significant success in applying this concept to a gasoline powertrain in the HyBoost project and it is a real achievement to be able to announce today that the ADEPT project team has completed its first functional integration vehicle in time for display at LCV 2014.”

In addition to the ADEPT prototype, Ricardo will also be displaying a range of low carbon vehicle technologies (stand No. C3-26, Hall 3 with an internal exhibition area and external vehicle display area) at LCV 2014 which runs from 10-11 September at the Millbrook proving ground. These will include the latest developments in Ricardo’s high speed flywheel energy storage, vehicle light-weighting and battery management system technologies.  Additional vehicle displays – with some ride and drive opportunities – will include Ricardo electric and plug-in hybrid technology demonstrators, and the final prototypes of two previous research projects; Syner-D (cost-effective low CO2 premium segment diesel) and HyBoost (intelligent electrification of a gasoline powertrain).

The control of all the 48V components might be very complicated as there are more and more components that are electrified. I guess that the issue to be faced will be the control unit computation power that may be not enough to support all these sensors and actuators. Do you think there will be only one supervisor and several distributed control units or one big control unit that handles the whole engine system?
Tweet