The SCADE model-based embedded software suite now features an automatic generation of HMI executable applications from a single model over a variety of targets, including Android or iOS tablets and other similar devices.

The code generated out of SCADE models is fundamentally independent from the target platform ― whether it is the hardware and associated drivers or the operating system ― as no system calls are being performed in this generated code. The portability of SCADE HMI models as executable applications is, thus, facilitated, as the needs for adaptation then reside only in the main execution and interaction loops, or in the windowing system management. The adoption of international standards like OpenGL (for drawings) EGL (as the associated windowing system) also facilitates this task. 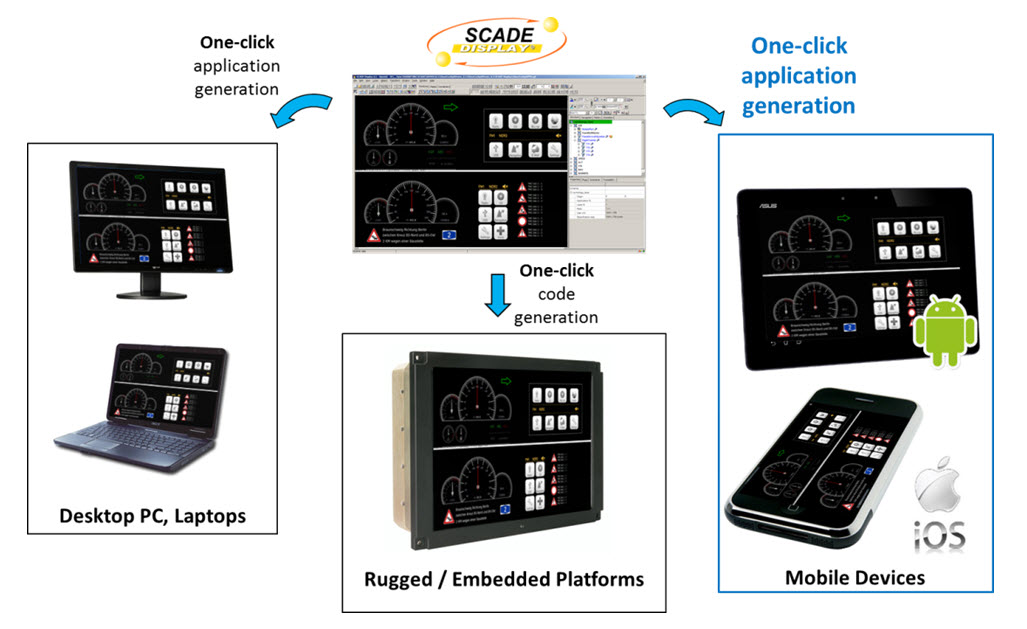 Both SCADE Display, for the design and generation of embedded HMIs, and SCADE LifeCycle Rapid Prototyper, for quick creation of simulation driving, support the automatic generation of interactive HMIs, or rapid prototyping panels, from a single input model. They do this for both Windows desktop PCs/laptops (all capable of managing OpenGL applications, either through dedicated graphics chips or motherboard built-in graphics adapters) and Apple iOS or Android-compatible mobile devices, such as smartphones or tactile tablets, through the native support of OpenGL ES 1.1 and 2.0 (ES standing for embedded systems and being the OpenGL flavor deployed on the majority of these mobile targets).

The SCADE design capabilities of interactivity concepts at model level, as basic bricks called interactors (pointers, keyboards, interactive active areas), combined with the independency of the SCADE generated code from the target platform provide HMI designers with possibilities to create multi-touch post-WIMP interfaces that can be deployed quickly on target.

Behaviors, interactions and modalities are not built in or hidden in the tool and everything is designed and managed as a model. This brings both HMI developers and designers the flexibility and advanced capabilities to create their own natural interfaces, based on models, without the need to know or manipulate low-level concepts.

Both SCADE Display and SCADE LifeCycle Rapid Prototyper generated applications feature a built-in communication layer, which can be activated or not on option, allowing to establish a remote communication over the network ― typically through Wi-Fi for mobile devices ― between the SCADE generated graphical panel and any other SCADE application, or remote simulators or testing environment. This allows, for example, driving and monitoring a real-time ANSYS Simplorer multi-domain simulation session ― possibly including SCADE generated software components ― from a tablet, via a graphical control panel designed with the built-in elements from the Rapid Prototyper widget library.