With falling fossil fuel prices, 2015 was marked by a general decline in the appeal of alternative fuels. But although growth in worldwide volume of biofuels production and consumption is slowing, blending requirements continue to increase and investment, though declining, is still taking place. To ensure the long-term sustainability of biofuel processes, a variety of conditions must be met, such as an increase in fossil energy prices and/or CO2 taxation, the use of policy levers including implementation of post-2020 objectives (incorporation levels, reduction of greenhouse gases, etc.) and fuel blending standards.

Biofuels in the road transport sector

Worldwide energy consumption in the road transport sector rose by nearly 2 billion toe (Btoe). During 2014, alternatives to gasoline and diesel fuels continued to expand, representing 6.7% of fuels consumed. Among these alternatives (biofuels, LPG, NGV, electricity), biofuels represent 69 Mtoe. Their consumption rose by nearly 8% between 2013 and 2014. At the same time, demand for road transport fuel rose by only 2.1%. 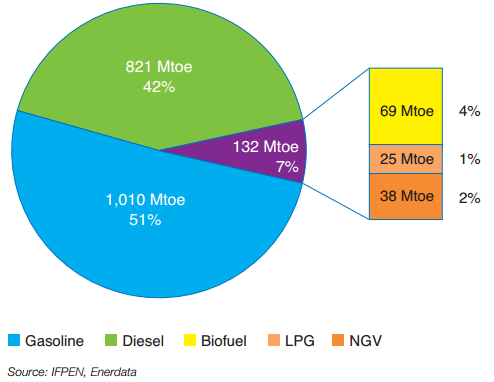 On a global scale, the share of biofuels consumed in transport is constantly rising, though at a slower pace during 2011-2014. Latin America posted the highest overall biofuel incorporation rate of more than 10% (in energy). North America and Europe followed, posting a rate of approximately 5% (in energy). 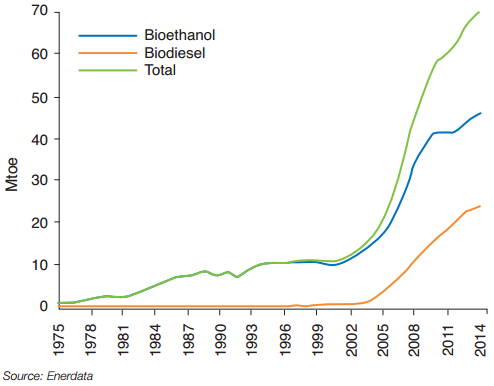 Following a downward shift between 2012 and 2013, the incorporation rate in Europe gained ground between 2013 and 2014. Biofuel consumption in the road transport sector returned to growth, though still below the level recorded in 2012. At present, only Finland and Sweden have already achieved the 2020 objective set forth in the Renewable Energy Directive proposed by the European Commission, which set a 10% target for energy from renewable sources in transport. 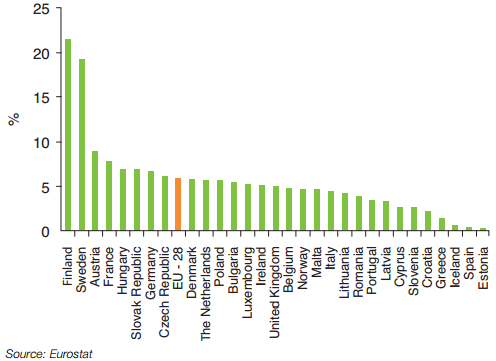 Until 2014, global biodiesel consumption – Fatty Acid Methyl Esters (FAME) and Hydrotreated Vegetable Oils (HVO) – was gaining ground, reaching record volumes (nearly 30 Mt), especially due to recent growth in the Brazilian market. Brazil became the world’s second largest producer and consumer, behind the United States. However, 2015 is expected to show a decline, mainly due to falling oil prices and regulatory changes in Germany, another major biodiesel consumer. The price difference between vegetable oils and diesel rose significantly during 2015. 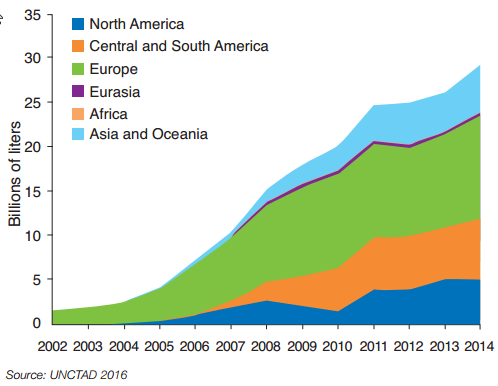 The Food and Agriculture Organization of the United Nations (FAO) announced a discouraging outlook for 2016 palm oil production, while global demand is constantly rising. In addition, producer countries that export a large portion of their production to the European Union (EU), such as Argentina and Indonesia, have faced significant import tax increases imposed by the EU. This rise in customs duties led to reduced imported volumes. Nonetheless, Europe remains the leading region for biodiesel production and consumption, due to the importance of diesel engines market share in road transport. 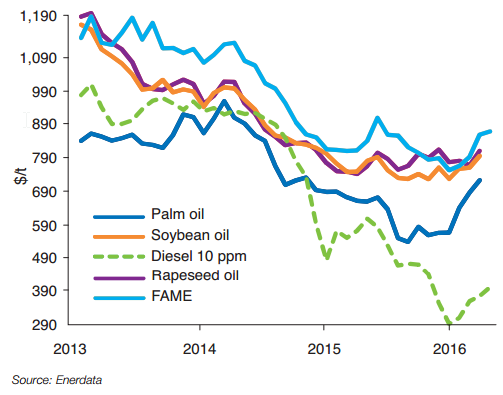 Among biodiesels, Vegetable Oil Methyl Esters (VOME) remain the major product, with an incorporation rate between 2% and 7% volume depending on the country (up to 8% vol. in France) in traditional diesel vehicles. Waste cooking oil methyl esters and animal fats have rapidly emerged, especially in Europe, due to the environmental and regulatory benefits of a “waste” type of resource. However, their growth potential remains limited by available resources, which are still relatively weak. Finally, HVOs have gradually gained ground since 2011 and, in 2015, represented 12% of biodiesel consumed worldwide. The market is primarily focused in Europe and the United States, and in Singapore for production.

Aside from a slight slowdown between 2011 and 2012 caused by a poor sugar cane harvest in Brazil and regulatory bottlenecks in the United States, worldwide bioethanol consumption has consistently risen. Only the EU posted a decline in 2015, triggered by fewer incentive policies and a general decline in energy prices. In Europe, 2014 saw falling consumption of fossil fuels and low agricultural resource costs, which led to the region’s near self-sufficiency in biofuels, at 99% for ethanol and 97% for biodiesel. 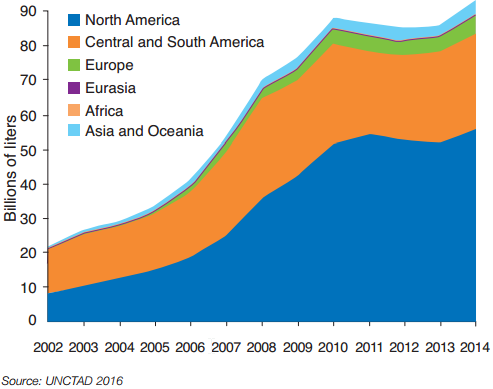 Outside of these geographic regions, consumption of ethanol as a substitute for gasoline is expected to rise, even though falling oil prices and market rates for starch and sugar crops do not favor growth as robust as was seen in the two previous years. In addition, little is still known about the industrial production of lignocellulosic ethanol, known as second-generation, launched in 2014 with only around ten projects worldwide.

General outlook on processes: toward a transition of biomass resources supply

With respect to first-generation biofuels in Europe, approximately 4% of total area under cereal and beet production is used for energy crops (bioethanol production), with a clear preponderance of cereals (more than 75%).

However, the share of sugar beets may increase, with the elimination of sugar quotas from the Common Agricultural Policy (CAP) in 2017. With respect to biodiesel, limits on the area available for oilseed crops have nearly been reached. With more than half of the area under rapeseed production used for energy crops, the limitations on expanding this process are being reached.

In this context, the European Commission is attempting to define sustainability criteria for the use of biomass resources in energy production, in order to limit additional reliance on food resources and ensure best environmental practices. The first-generation processes using these food resources will no longer benefit from public assistance in 2020, and will be capped at a maximum rate of 7% incorporation in the energy mix for the transport sector. In addition, waste resources count twofold for target accounting purposes. Hence the rapid development of waste cooking oil and other animal fat biodiesels, which represented nearly a quarter of resources in the European biodiesel market for 2014.

Lignocellulosic processes using forest or agricultural resources, or industrial residues (such as straw, forest residues or paper mill black liquors) will also benefit. The planting of dedicated lignocellulosic crops (miscanthus, short rotation coppice, etc.) may be regulated by restricting the type of areas used for their cultivation.

These lignocellulosic resources are currently being studied with a view to developing second-generation biofuels. The first commercial lignocellulosic ethanol units were launched at the end of 2013 and then in 2014, in the United States, Brazil, Europe and China. Today there are more than ten commercial 2G ethanol units worldwide, including five in the United States, two in Brazil and in China, and one in Europe and in Canada. The United States, China, Canada and Europe also have a number of demonstration projects in development. 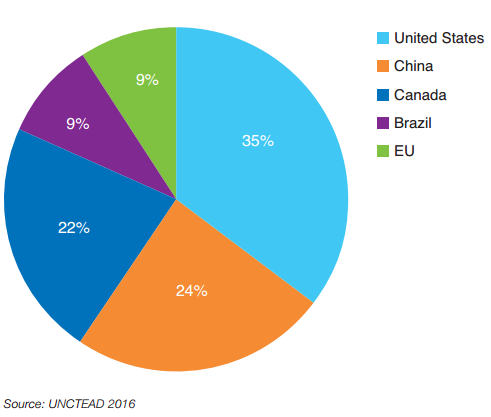 In Europe as in France, their development currently awaits more specific regulation of carbon emission reduction targets in the transport sector and related sustainability criteria. The French second-generation ethanol demonstrator operated by IFPEN (Futurol program) is under development at the Pomacle site (Marne). New outlets for the technology in green chemistry are also planned. There is not currently a lignocellulosic industrial unit for the diesel sector. Several BtL pilot units were launched, accompanied by the emergence of pyrolysis pilot units in the refinery. The French BioTfueL project is under development, with a gasification demonstration facility in Dunkerque and a biomass roasting demonstration unit near Compiègne, expected to launch in 2017.

Over the longer term, methods for producing molecules of interest through cultivation of microorganisms such as micro-algae (autotrophic method) or yeasts (heterotrophic method) are being studied. Mainly still in the laboratory phase, these technologies may allow production of diesel substitutes, kerosene for aviation and numerous biosourced products for the chemical sector. Though a number of actions are ongoing to develop alternative fuels for aviation, the extreme temperatures, pressure, fungibility, the critical safety challenges and the multinational nature of product use have hindered the product approval process and the expanded use of biojets over the short term.

In conclusion, a marked decline in demand for alternative fuels during 2015, triggered by low fossil fuel prices, has slowed growth in the biofuel sector. In Europe, product inventory is swelling, prices are falling, and imports declining, but around the world, incorporation mandates continue to grow and investment continues.

Growing awareness of the need to reduce carbon emissions in the transport sector supports the development of alternative fuels. Liquid fuels will remain the principal energy source for the transport sector over the short to medium term. Nonetheless, to ensure the long-term sustainability of biofuel processes, a variety of conditions must be met such as rising fossil energy prices and/or CO2 taxation in the transport sector, the use of policy levers, specifically implementation of post-2020 objectives in Europe, clarification of sustainability criteria and the increase in blending grades (including E20). Lastly, the development of new processes will undoubtedly require investment support.