In the future, electrically conductive lubricants will protect electric motors from the surface damage that can result from electrical discharging in the bearings. With these findings, which are the result of a joint research project, a group of German basic and industrial engineers have taken an important step toward achieving the sustainable electromobility of the future. The project is funded by the German Federal Ministry for Education and Research.

The initiative was launched to prepare for the vehicles of the future, which will require higher voltages than current models. At present, 12 volts are required to provide all automotive electric systems – from lights and radios to air conditioners – with sufficient power. Within the next few years, the figure is expected to rise to 48 volts, as electric power is required for a growing number of functions. The voltage levels of electric and hybrid vehicles are even higher: these vehicles can require as much as 400 volts.

“In alternators and electric motors, higher voltage levels mean that alternating electric fields are stronger than they once were,” says Dr. Gerd Dornhöfer, one of the Bosch associates taking part in the “SchmiRmaL” project (Switchable intelligent tribological systems with minimal friction losses and maximum lifespan). This can cause, for instance, electrical discharge in the ball bearings of motors and alternators. When this occurs, sparks may fly that can melt tiny areas of the metal’s surface. This, in turn, leads to uneven raceways. As a result of this, the ball bearings first begin to make noise, and then to malfunction. “We can already prevent this from happening reliably with the lubricants we have developed,” says Dornhöfer as he looks at the measurement results on his computer. The chief expert for lubrication technology works for the corporate research department in Gerlingen, close to Stuttgart.

Anyone who has ever gotten a small electric shock from a doorknob is familiar with static charges. When the finger is just a few millimeters from the doorknob, an electric spark jumps between the two. The higher the electric tension, the further the spark travels. The air between the door handle and the finger acts as an insulator until the finger is close enough to the knob.

Lubricant film acts as an insulator

The same thing can also happen when a current is generated between the shaft and housing of an electric motor, as the lubricant coating in the bearing acts as an insulator. As rotation speed increases, the lubricant greases in the ball bearings separate the bearings from the raceway. This is comparable to hydroplaning on wet roads. Unlike on roads, however, this phenomenon is desirable in ball bearings, as it minimizes the friction generated by the bearings as well as the surface damage. However, this can also lead the bearings to recharge when the lubricant film is intact, similar to a capacitor. When the built-up voltage is sufficient, it can penetrate the insulating lubricant grease. This energy suffices to briefly melt a tiny area of metal on the bearing’s surface. If this happens repeatedly, tiny imperfections eventually appear on the bearing. “We want to prevent this at all costs, as it can result in greater damage to these spots over time,” says the Bosch scientist. Engineers refer to this as electrical pitting. The process results in damaged areas on the raceway that are comparable to potholes. In the future, the energy of these discharges may become greater as the power density and voltages of automotive electric systems increase.

In light of this potential problem, the SchmiRmal project’s strategy focuses on developing new lubricants, whose substances remain conductive even at higher voltage levels. As a result, these lubricants do not act as insulators to begin with. Voltage levels no longer build up, nor does potentially destructive electrostatic discharge. 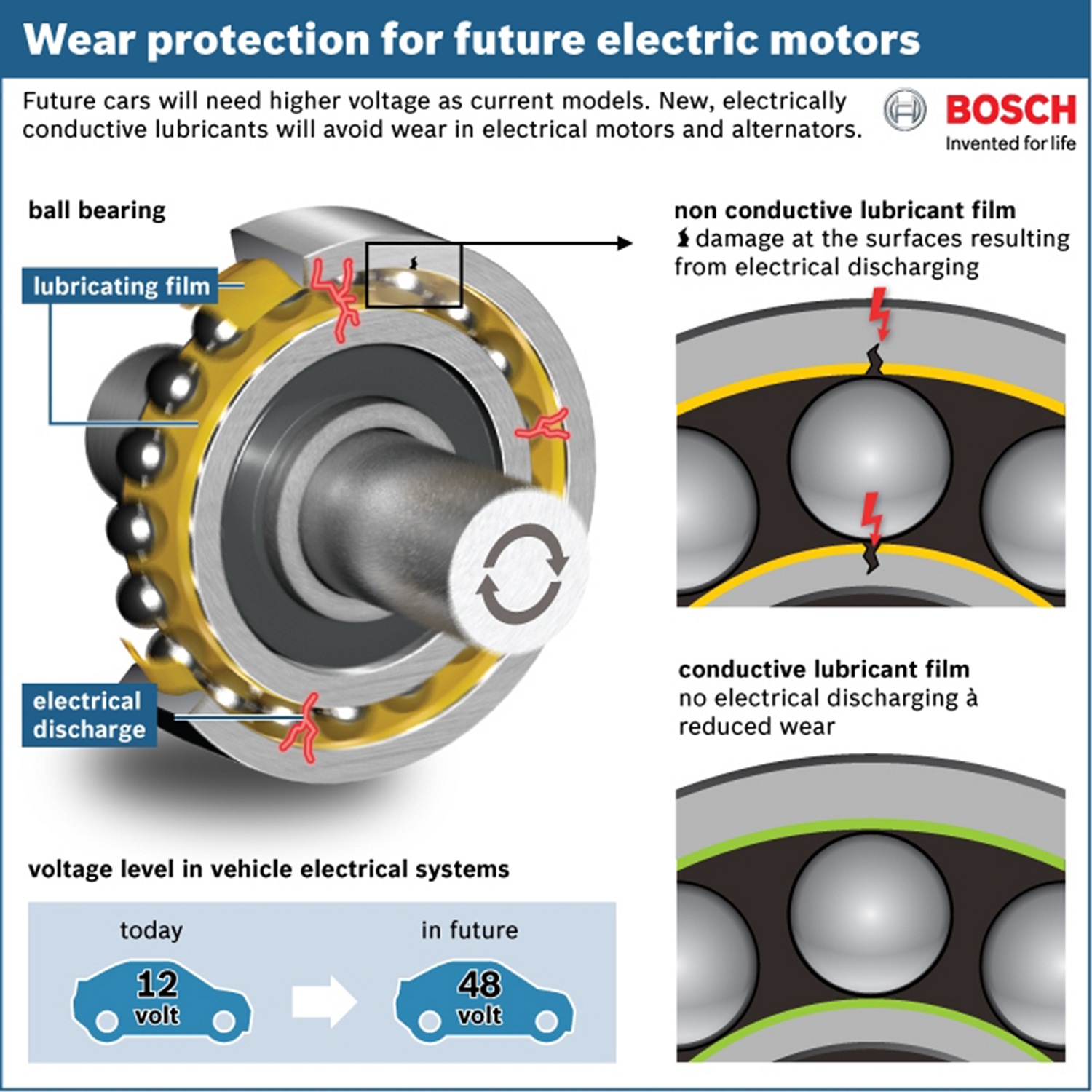 “This can be achieved in several ways,” said Dornhöfer. “One could, for instance, add fine metal particles to the grease to conduct the current. But this would mean that the lubricant grease would also act as an abrasive, and of course we want to avoid this.” Here, ionic fluids are more suitable. In chemical terms, these comprise molecules known as ions that conduct an electrical charge. “Ionic fluids conduct electricity, and this is why we add these substances to our lubricants,” said Dornhöfer.

Following countless tests, the scientists have now come up with greases that are less and less resistant to electricity. In other words: the lubricant conducts electrons as desired in the ball bearing and thus prevents the dreaded electrical flashovers. The initial material was a commercially available industrial lubricant. “By using the right ionic fluids combined with conductive carbon, its resistance can be reduced by a factor of ten million,” says the Bosch scientist. This is enough to prevent the unwanted electrical discharges.

While the new grease is black, it otherwise largely resembles its predecessor. At present, Dornhöfer is focusing in part on investigating all of the grease’s characteristics. To ensure a long life cycle, ball bearings must be heat resistant and have cold flow properties. Moreover, the new additives should not compromise the grease’s corrosion protection properties. And it goes without saying that the new grease should not pose a hazard to human health or the environment. All of this is currently being tested as part of the BMBF project. “So far, our findings have been very promising”, Dornhöfer says.

Many scientists from a broad range of disciplines and sectors have contributed to this success. “No one can find these solutions alone. We are all contributing and learning from one another,” Dornhöfer says. The project is set to run until April 2015. “Chances are high that the new lubricants will find industrial application after the project.”

The benefits of the project’s work go beyond applications for electric motors. The new lubricants can also increase the service life and reliability of machine elements that experience high levels of strain, especially roller and plain bearings and transmission components. Moreover, performance can be improved for motors of the same size, or maintained if motors are smaller. At the same time, the lubricants contribute to reducing energy consumption and to increasing efficiency.

Klüber Lubrication SE & Co. KG (Munich) is a specialty lubricant manufacturer. IoLiTec-Ionic Liquids Technologies GmbH (Heilbronn) develops ionic fluids. Schaeffler Technologies GmbH & Co. KG (Herzogenaurach) is an automotive supplier that develops and manufactures rolling bearings. The company’s role in the project is to assess how new types of oil can improve the service life of bearings. Inprotec AG (Heitersheim) develops highly effective coatings that protect against abrasion. Over the course of the project, SCHUNK GmbH & Co. KG (Lauffen/Neckar) is working on improving the durability of a valve. Using computer models, the Fraunhofer Institute for Algorithms and Scientific Computing SCAI (Sankt Augustin) is making forecasts about the potential environmental impact of new ionic fluids. Over the course of the project, the Fraunhofer Institute for Mechanics of Materials IWM (Freiburg im Breisgau) is focusing mainly on the potential lubricating effect of ionic fluids. Bosch is applying these new lubricants and testing their suitability under real-world conditions.

This wear phenomenon is not well known among OEMs and I guess that Bosch will have difficulties to include this new lubricant in its components and system due to its probable higher cost. Plus, in hybrid systems, the electric machines bearings are not the parts that have the highest failure rates, unlike brushes, battery cells, converters… Do you think that OEMs will put the focus on bearings durability for the next generation 48V systems? Do you think that this conductive lubricant technology will be ready in 2020, when 48V systems will probably lead the market?
Tweet