FIAT City Brake Control is an autonomous emergency braking which helps a driver avoid a low-speed crash. At vehicle speeds between 5 km/h and 30 km/h, City Brake Control uses a lidar (Light Detection And Ranging) sensor positioned at the top of the windscreen to monitor an area 10-12 m ahead of the car for vehicles which might present a threat of collision. If a collision is very likely and the driver does not react, City Brake Control first pre-fills the brakes to provide a quicker and greater level of braking when needed. If the collision becomes more imminent, the system makes the hydraulic brake assist function more sensitive, boosting braking pressure to provide a shorter braking distance. If the driver continues to take no action, City Brake Control applies the brakes autonomously and, at the same time, issues a warning (a buzzer, together with a visual signal in the dashboard) to the driver that the system has had to intervene to prevent an accident. At speeds between 5km/h and 20km/h, the brakes apply a maximum deceleration of 10 m/s²; between 20 km/h and 30km/h, the maximum deceleration is 6 m/s². If, shortly before a collision, the driver does try to brake, City Brake Control will optimise the braking, helping to avoid the collision. 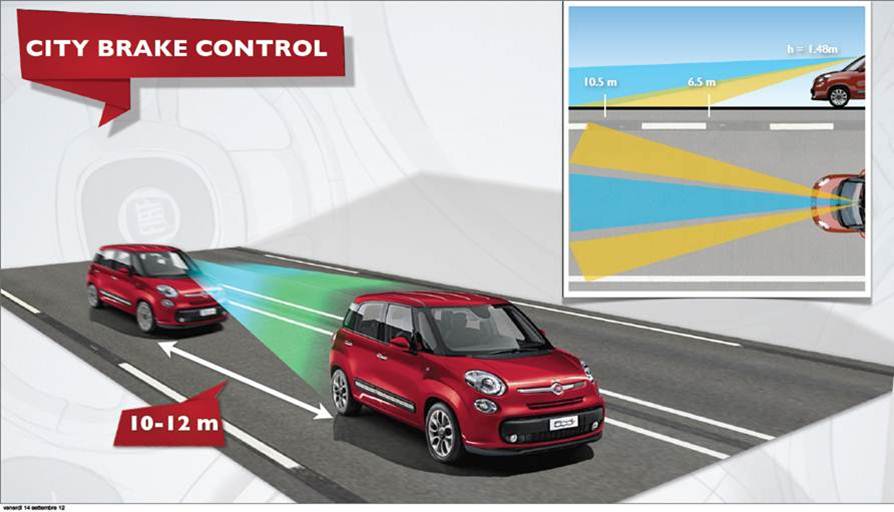 FIAT City Brake Control is a technology designed to avoid low speed rear-end collisions with vehicles which are stationary or travelling in the same direction. Rear end collisions are extremely common. According to some estimates, around a half of all accidents involve a rear-end collision. City Brake Control operates only up to 30 km/h so focuses on the sorts of rear end collisions which take place during urban driving. Fatal and severe injuries are not common for car occupants in accidents below that speed. However, soft tissue ‘whiplash’ injuries are frequent, not only for the occupants of cars struck from behind but also for those in the striking vehicle. It is estimated that a system like City Brake Control could prevent nearly 26,000 injuries every year if fitted to the whole vehicle fleet.

City Brake Control is turned on by default at the start of each new journey but can be switched off by the driver. If it switched off, the system defaults on again at the beginning of the next journey.

City Brake Control functions only between 5 km/h and 30 km/h, so will not assist in accidents at ‘highway’ speeds. Its lidar can detect vehicles which are at a standstill or which are travelling in the same direction and works at night as well as during the day. However, the sensor is compromised if it is covered by dirt or snow, or in adverse weather conditions such as thick fog or heavy rain. To mitigate this, the sensor is sited in the area which is swept by the windscreen wipers.

I’m wondering why the system is not enabled above 30 km/h? Is that because of the radar capacity or the braking system response time?