The JTEKT invention regarding “Friction Control Technology for Torque-Sensing limited slip differential” was awarded “Invention Award” at 2014 National Commendation for Invention Award Ceremony, the greatest invention commendation in Japan, hosted by Japan Institute of Invention and Innovation. The company received the award for the first time in five years. The award ceremony was held in the presence of HIH Prince Hitachi and HIH Princess Hitachi in Tokyo and four inventors from JTEKT attended it.

This invention provides an innovative technology relating to suppression of self-excited vibration essential to apply a gear type torque-sensing limited slip differential (hereinafter referred to as TORSEN®) to hybrid four-wheel-drive vehicles which require high quietness and safety. TORSEN is a torque-sensing type driving force distribution mechanism which instantly optimizes torque distribution between front and rear wheels and between right and left wheels in a vehicle depending on running conditions by using the unique gear design. 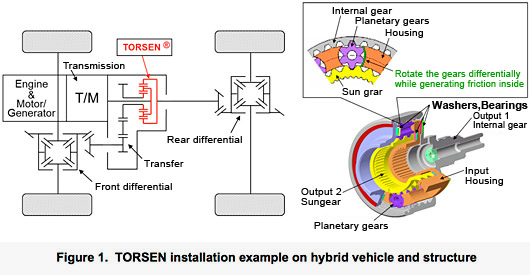 The newly-developed TORSEN can limit slip of the front and rear wheels, and transmit engine and motor power completely to road surface even in the conditions of slippery road surface due to rain and snow. In order to achieve the running performance while securing quietness, the friction control technology of this invention plays a large role.

Depending on the vehicle running conditions, TORSEN needs to rotate the gears differentially while generating friction inside. In this case, the friction must be generated smoothly while suppressing self- excited vibration at the sliding portion. In order to achieve this, JTEKT clarified the relationship between gear surface roughness profile and quietness from the theoretical calculation of friction behavior under mixed lubrication (mixture of boundary lubrication and hydrodynamic lubrication), and found out a peculiar effect (invention) by designing the surface with the new roughness index introduced based on the finding. 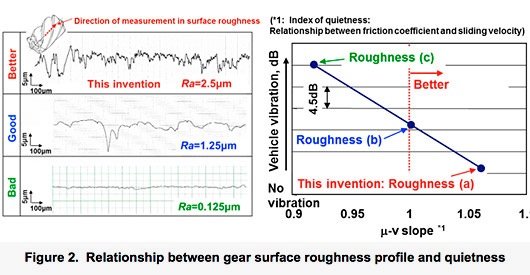 Thus, this system achieves improved quietness, lower fuel consumption, and safety while securing the reliability even on a severe gear siding portion exceeding hundreds of megapascals with the above friction control technology.