Dallara and Pirelli recently pulled off a technological progress: a joint development test with the driver, engineers and circuit located in three different continents.

Dallara and Pirelli engineers used Dallara’s simulators to prepare for a development test using the current GP2 car with 18-inch tires at the Bahrain International Circuit in Sakhir in mid-February. But this was no ordinary simulator session. Two simulators were used to prepare for the track test, linked together in real time, with one at Dallara’s Varano headquarters in Italy and the other at Indianapolis in the USA. 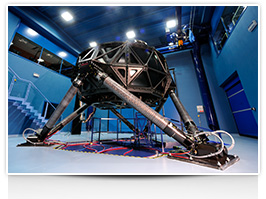 Accomplished test driver Luca Filippi, in Indianapolis as part of his IndyCar campaign, was able to ‘drive’ a virtual GP2 car on a copy of the Bahrain circuit, while Pirelli and Dallara engineers remotely controlled the simulator from Varano.

Alessandro Moroni, Dallara’s testing manager, said: “Controlling a simulator like this remotely is a complete innovation. So while Luca was driving our simulator at Indianapolis, the data from the session was being checked and managed from Italy by our engineers and those of Pirelli in real time – despite nearly 10,000 kilometers of distance between us. This innovation opens up a whole host of new possibilities for the future, such as joint simulation, where two drivers in two simulators can ‘drive’ together on the same track, even though they might be thousands of kilometers apart.”

Luca Pignacca, Dallara’s chief designer and EU business leader added: “This type of simulation is truly revolutionary, opening up new frontiers when it comes to design and development of competition cars. Just as Pirelli was able to control the simulator session from Varano on this occasion, in future it could do the same not only from its own headquarters, but from absolutely anywhere in the world, using just a fast Internet connection.”

Pirelli’s racing manager Mario Isola commented: “A new development scenario has emerged thanks to this important long-distance test, with the three key protagonists spread out over a wide geographical area but connected in real time with a continuous flow of data. In future it will be possible to organize tests, for the purpose of tire data collection, without having to physically transport people to different parts of the world. The data we captured together with Dallara, along with the efficiency of its transmission and interpretation in real time, will one day allow us to test at any circuit, anywhere in the world, using a simulator located elsewhere. Without leaving Milan, we will perhaps be able to try out different tire solutions and then compare them, adapting them to the real world needs of any single-seater car.”

Doing simulation remotely is an open door to improved products and reduced development costs. It would mean that suppliers and customers can collaborate in real time and remove all the layers and bounds that are slowing down innovation and developments. Do you think that this kind of technology will be shared with the automotive industry and tailored for its needs?
Tweet