These prismatic lithium-ion battery cells being delivered for the 2016 new model Chevrolet Malibu Hybrid employ heat resistant separators to ensure the ionic conductivity between the positive and negative electrodes, achieving output power density of 5,000W/kg. In addition to this, the battery’s ability to maintain its high output power density in GM evaluations, even under extremely low temperatures such as the minus 30℃ cold region test, led to its adoption. 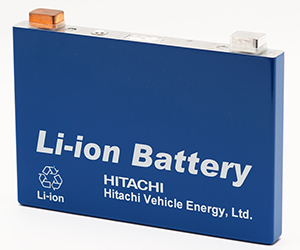 Hitachi’s lithium-ion battery operations for vehicles began in 1999. To date, a total of over 5 million lithium-ion batteries have been introduced into the market for commercial hybrid buses and trucks, as well as hybrid passenger cars.

The many years of supply performance for lithium-ion batteries as mass produced products, together with the accumulated production and quality management know-how garnered from feedback from the market, has led to an emphasis on high reliability.

Hitachi Automotive Systems will continue to contribute to the evolution of electrically driven vehicles through the strengthening of electric power train products, lithium-ion batteries, and more.