Few weeks ago, we introduced you an innovative concept of roof airbag that is to be implemented in the Citroen C4 Cactus. We have had the chance to ask more details about this technology to Thierry Métais, Global Account Director at TRW for PSA group.

Car-engineer.com: This roof airbag technology that deploys from the car’s roof to the dashboard seems complicated to be set-up from a kinematics point of view. What are its particularities?

Thierry Métais: This technology is not harder to develop than another airbag technology like the curtain one. The bag trajectory is well designed to follow the windshield to end in front of the instrument panel. In a well designed system (seat and seat-belts) as it is and with the body in a correct position, the head will have a circular trajectory that will end-up in the airbag. The deployment speed of the airbag is slightly faster than a standard airbag coming from the instrument panel, meaning that the airbag will always be deployed on time and well positioned to receive and absorb the energy of the head.

Car-engineer.com: What are the advantages of this technology?

Thierry Métais: First, as I said, the bag deploys slightly faster along the windscreen and applies on the dashboard area. Then, the energy in the end of the bag trajectory is less important than with a classic passenger airbag, which results in a softer impact in extreme cases like a “bad position” of the head. Last, but not least, it saves some space for storage in the instrument panel by removing the airbag module that was inside.

Car-engineer.com: Is there any disadvantage by implementing the roof airbag technology?

Thierry Métais: The main drawback we see is that this technology is not rewarded by the current EuroNCAP test procedures, meaning that it is hardly marketable. Additionally, it requires some specific adaptation to be implemented in a convertible car.

Car-engineer.com: How is the validation process of such a technology?

Thierry Métais:  We start by making some 3D simulations of the kinematics of the airbag. Then we develop the first prototypes of the system that we test in a lab environment for evaluating the outbreak of the bag. We finish the validation process by testing the technology in its final environment in order to check that the deployment is interacting properly with the rest of the car. Once we considered the technology ready, we performed its administration approval at the UTAC center, a French service company that performs approval testing in compliance with the different regulations.

Car-engineer.com:  What is the future for this technology?

Thierry Métais: First we aim at rolling this roof airbag system out some other vehicles in PSA group and other manufacturers. Then we are working on adapting this technology to the rear seat occupants. 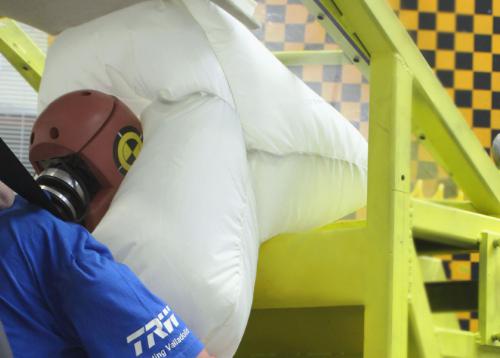