The gearbox layouts are of two kinds:

We can notice that all these types and layouts allow four wheel drive adaptation.

Considering all types of transmissions, we can say that the trend for transmission volumes is the same than for vehicles volumes. The following graph shows worldwide volume trends over the years including expectations until 2015. 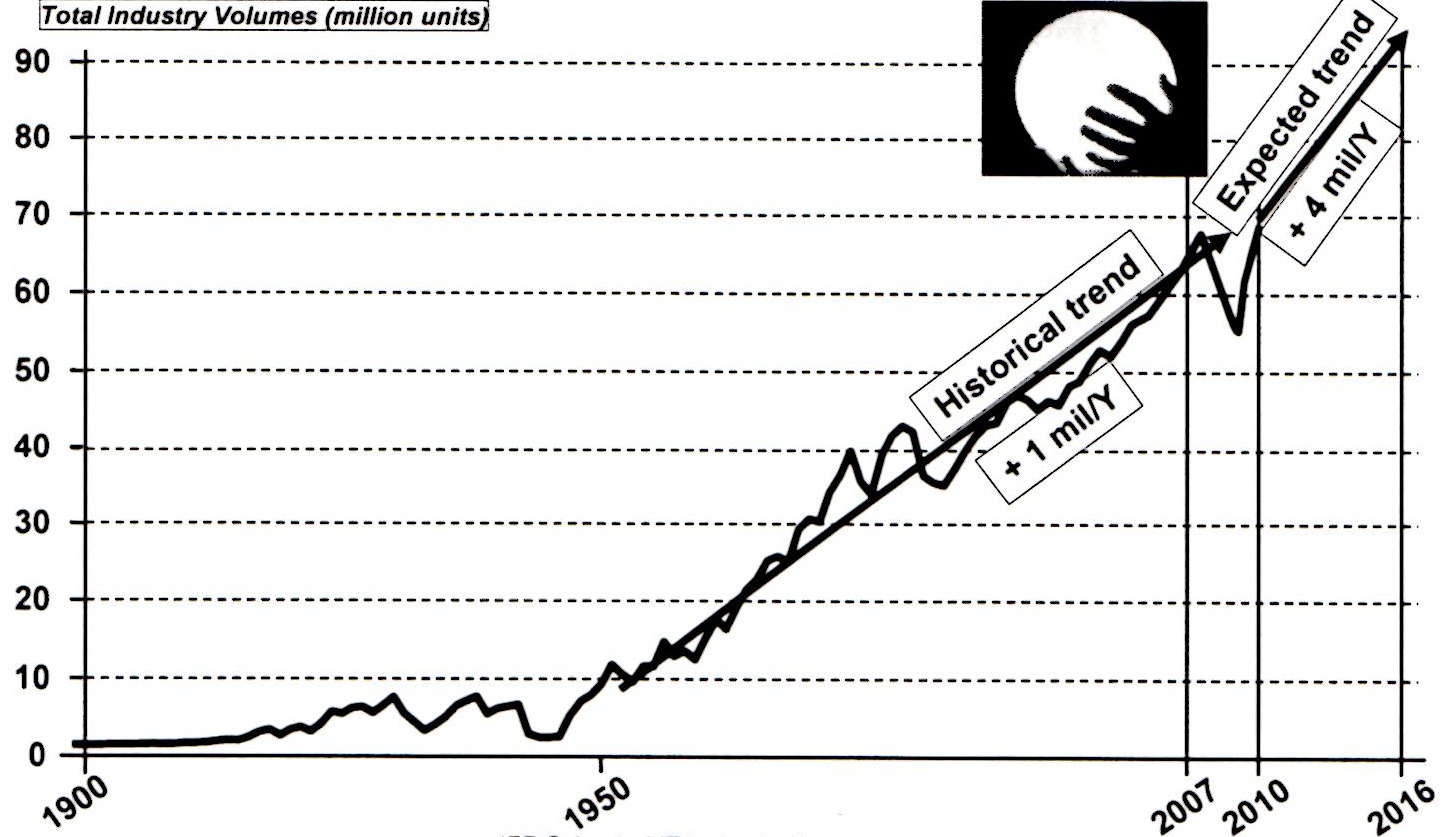 A big volume drop is observed around 2008, due to the automotive industry first crisis. However, from 2010, the trend is much higher thanks to high vehicle production in Brazil, Russia, India and China (BRIC).

In 2009, passenger cars transmissions world market is estimated around 60 million units with an equal repartition between AT and MT. The BRICs market is the biggest with 19 million units followed by Europe (16 million), North America (12 million) and Japan with 5 million units.

The split between AT and MT is also varying a lot between those regions mainly for historical and cultural reasons:

However, the split is changing in some regions, mainly due to ecological context. For example, the split in 2009 and expected split in 2015 are compared in Western Europe in the following graph:

It can be said that the part of MT is to be decreasing, to DCT’s advantage. This is explained by the fact that DCT technology is today mature and can bring some fuel saving compared to MT.

The main MT manufacturers can be divided into two categories, the historical ones based on historical markets and the new comers that are appearing in emerging markets.

In Europe, car manufacturers used to manufacture their own manual transmissions even if some suppliers like ZF or Getrag are more and more present on the market. It is the same situation in Japan where Toyota , Honda or Nissan manufacture MTs but also Aisin or Jatco as suppliers. In BRICs, the new comers are Tata, BYD, FAW, Tsingshan or WIA.

Definition and function of a transmission device

The gearbox is a power transfer device whatever it is a MT or AT. It allows the take-off of the vehicle, the transfer of the engine power to the driving wheels, in forward and reverse direction, in accordance to the driver demand and it achieves an adequate distribution of the torques and rotation speeds between the right and left driving wheels.

To execute those functions, the device is composed of:

An example of transmission device is presented below (Here a Renault PK4 manual gearbox): 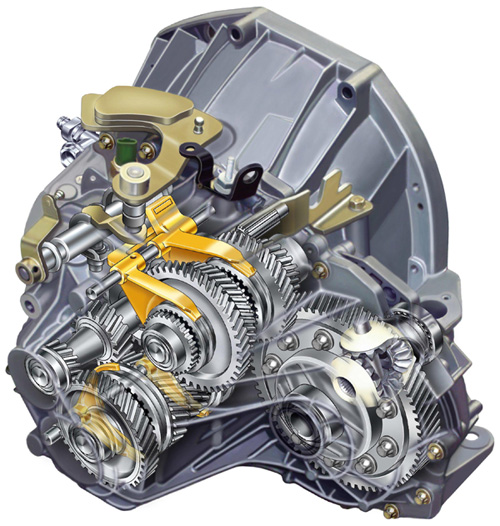 Let’s focus now on functional requests of the manual transmission.

The functional requests are divided into 5 areas:

This article only deals with fuel consumption and driving performances. However other topics will be tackled in an upcoming dedicated article.

Vehicles are generally equipped with an internal combustion engine which delivers its maximum torque or power on a limited range of rotational speed. Hence, with only one reduction ratio between engine and wheels, the driver would reach the limits of the engine on a limited range of vehicle speed. Moreover, it is necessary to reach maximum engine output in a wide range of vehicle speed:

Then it is necessary to interpose between engine and driving wheels a transmission which offers various reduction ratios of speed and torque. This variation of speeds allows a rational use of the engine thanks to suitably staged gears inside the transmission.

The criteria for assessing the design of gear ratios are:

When choosing the first gear ratio, it is needed to consider the take-off capacity, including the towing conditions. The classical values for a 1st gear ratio are from 18 to 12 meaning that vehicle is approximately between 6.5 and 10 km/h at 1000 rpm.

For the choice of intermediate ratios, engineers take into account the driveability and mid-range accelerations but also the fuel consumption on cycle.

When all the gear ratios are chosen, the ratio range indicator is computed as the 1st gear ratio divided by the final gear ratio. This indicator expresses the type of design of the manual transmission. Classical values are generally between 4 (performance design) to 7 (fuel economy design). An example of gear ratios values for the Renault PK4 gearbox is shown in the table below: 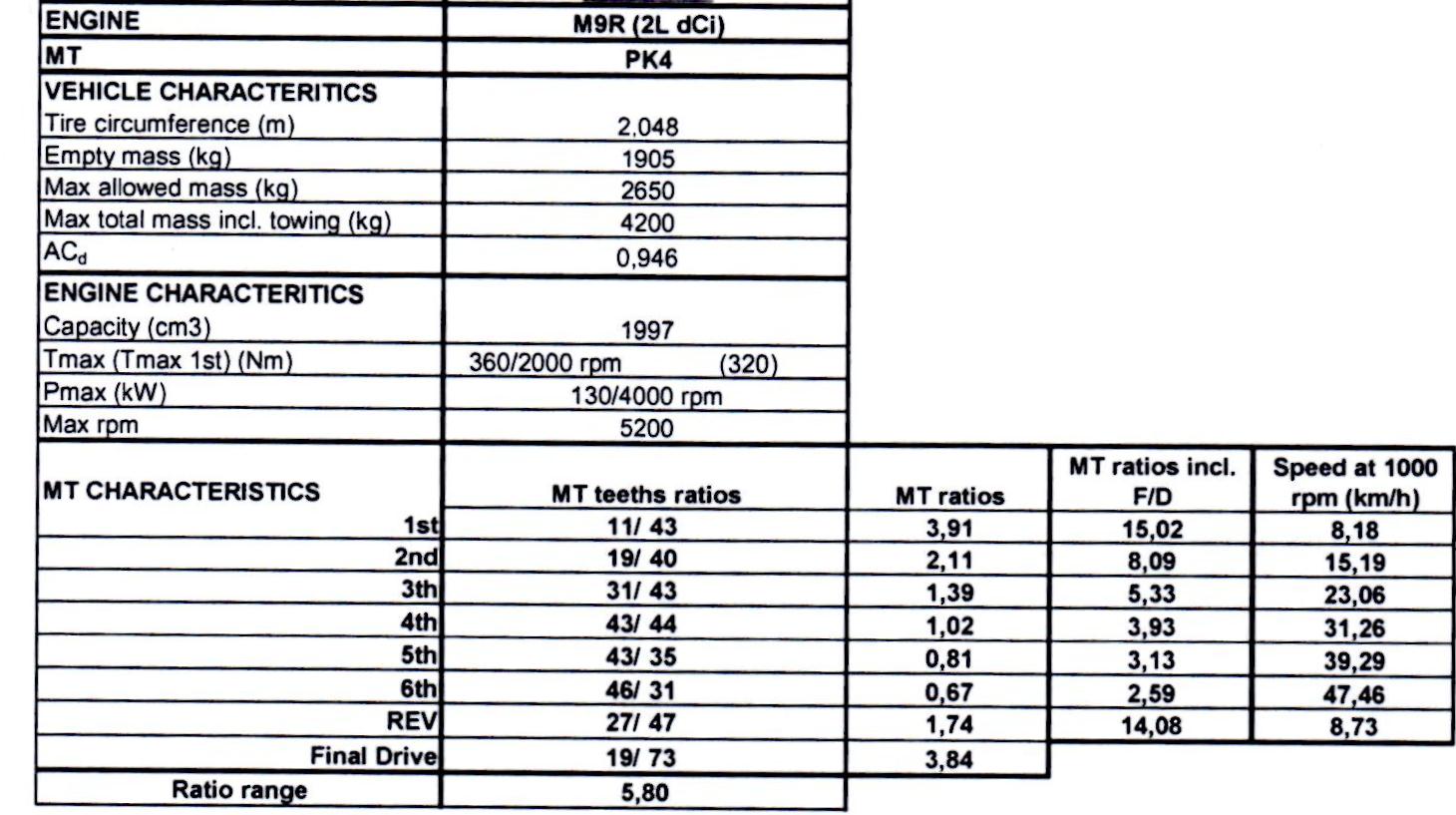 Besides the ratios design, two other factors influence the fuel consumption of the vehicle, the gearbox mass and its efficiency. Regarding the mass, it is more or less proportional to the torque that the gearbox can transmit. It is said that the relationship is about 1 kg / 10 Nm. The efficiency of the gearbox depends on the losses due to gears and bearings friction, churning losses… The evaluation of those losses allows to compute the fuel consumption of the vehicle which is due to MT.

The graphic below presents the drag torque vs the torque capacity of a gearbox (in 5th gear at 2000 rpm with 30 Nm torque at 50°C): 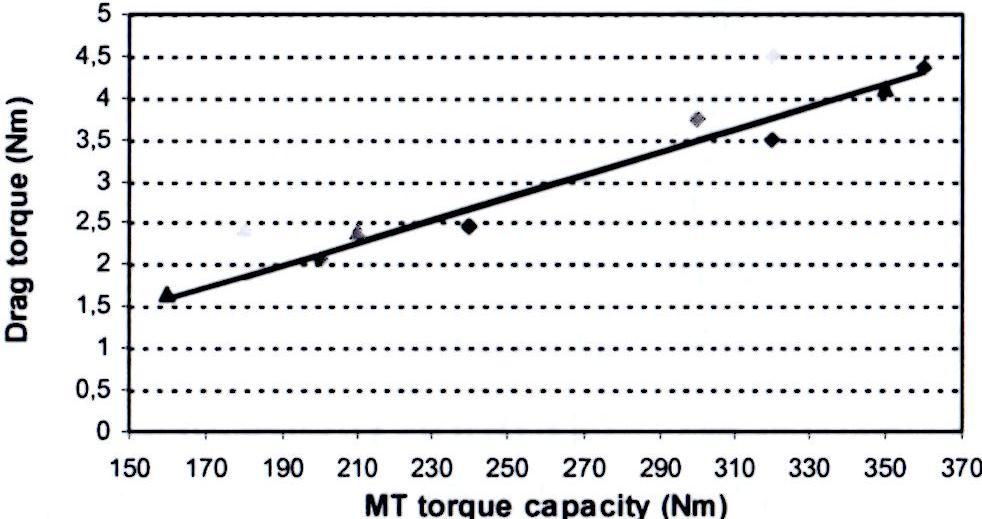 It can be said that the drag torque proportionally increases with the torque capacity. With current MT, the part of fuel consumption due to MT losses is between 3 and 5%, and its efficiency is between 85 to 90%. As a comparison, a classic AT can represent up to 20% of the total fuel consumption.

Manual transmission technology is known since 18th century and now mastered by car makers. It is a cheap and efficient way to ensure transmission functions. For a correct design several parameters are taken into account as fuel economy, performances, acoustics or packaging. The gear ratio design is the way to reach wanted fuel consumption and performances. Indeed, first and last gears are of great importance for maximum speed, take-off and fuel economy. And finally, the efficiency of the gearbox is assessed and lowered as it is also a contributor to complete powertrain fuel efficiency.

Manual transmission is today the best solution for transferring torque/power of an engine. I mean that this is maybe not the most comfortable, maybe not the most fuel efficient neither the most packageable, but it is the best trade-off between those parameters and the cost and manufacturability. Indeed, DCT provides a better fuel economy, AT provides a better comfort, but they are both more expensive and heavy than a MT. Of course, this clearly depends on the market and customers habits as for the US market MT is not acceptable even if it is more fuel efficient than an AT. I think that even if the MT is getting an old technology, it still has some potential growth in cost driven markets like India or China and will ever be a part of the transmission mix. Do you think MT’s part of the mix will remain the same in 2020? How do you think final customer influences this mix?