Audi is now building on its lead in the domain of lighting technology with a world first: The Audi Matrix LED headlights will make their debut on the new A8, which is appearing on the market at the end of 2013.

Audi Matrix LED technology splits up the LED high-beam headlights into numerous individual, small diodes working in conjunction with lenses or reflectors connected in series. Managed by a responsive control unit, they are activated and deactivated or dimmed individually according to the situation. This means they always supply high-precision illumination and achieve the maximum possible light yield without needing a pivoting mechanism.

In the new Audi A8, each headlight comprises 25 high-beam light-emitting diodes, arranged in groups of five per reflector. When the light switch is set to “automatic” and the high-beam headlights are on, the system is activated from 30 km/h (18.64 mph) on city streets and from 60 km/h (37.28 mph) on highways. The Audi Matrix LED headlights produce a quality of light with a special crystalline sheen. By day, too, they have an attractive and distinctive look, which is reinforced by the new appearance of the daytime running lights. 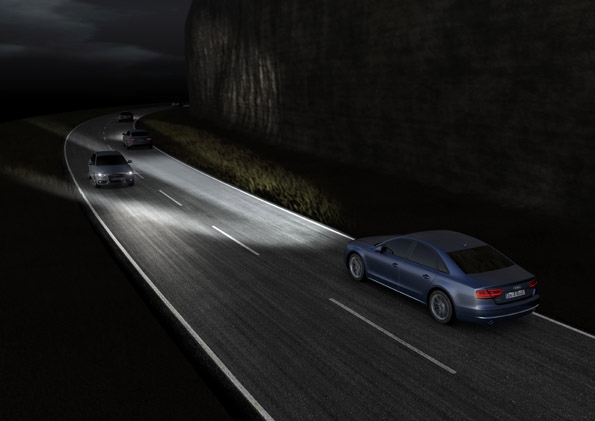 As soon the camera in the A8 detects oncoming vehicles, the Audi Matrix LED headlights dip the relevant sections of the high-beam headlights. The system operates with precision and blanks out light that would shine directly onto oncoming and preceding vehicles, but continues to cast the high beams with full power on all other zones between and beside them. The closer an approaching vehicle gets, the more LEDs are deactivated or dimmed. When there is no more oncoming traffic, the high-beam headlights then resume full power, including the sections that had previously been off. The light that the driver sees is always bright, homogeneous and much more effective than that produced mechanical dipping systems. 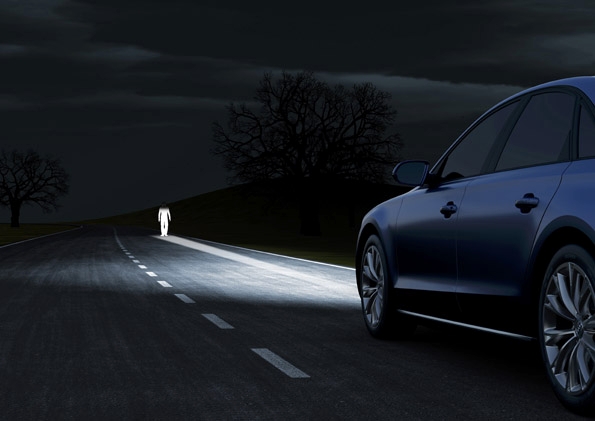 Matrix LED technology offers potential in different respects, in terms of number of individual LEDs, arrangement, and size and design of the headlights. One of its safety functions in the Audi A8 involves providing what are known as marker lights: this teams up with the optional night vision assistant to mark detected pedestrians. When it detects a person in the critical range in front of the car, individual LEDs flash at them rapidly three times in succession, picking out the pedestrian clearly from their surroundings and alerting both the pedestrian and the driver.

The light-emitting diodes of the Audi Matrix LED headlights also perform the cornering light function; they displace the emphasis of the beam in the direction of the bend. By calling on predictive route data supplied by the MMI (Multi-Media Interface) navigation plus, they do so shortly before the steering needs to be turned. Another function in the new Audi A8 is the turn signal with dynamic display: The LEDs in the turn signals flash in blocks at 150 millisecond intervals in the direction that the driver intends to turn.

Audi leads the way in automotive lighting technology and the brand has repeatedly masterminded crucial advances over the years. Here are just the main world-leading innovations:

1994: second-generation xenon headlights in the Audi A8

2010: connectivity between the headlights and navigation data in the Audi A8

2011: homogeneous LED rear lights design in the Audi A6

2012: turn signal with dynamic display in the Audi R8

2013: full-LED headlights for the compact class

2013: EU validates LED technology from Audi as an eco-innovation, the first manufacturer to be certified for this technology

Audi intends to extend its lead step by step. The automotive lighting of the future will respond with even greater precision to the surroundings and interact with it in diverse ways. It will have all-electronic control and be even more attractive thanks to new dynamic functions.

Audi is clearly working and communicating a lot on the headlights technology (See our feature article about Audi LED lighting technologies). This technology is however reserved to high end segment and the safety features won’t be available for most of the cars. Do you think that the gain of electrical consumption due to LED technology can compensate the LED system cost itself? What would be the cost for the system depicted above?