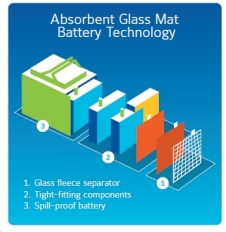 The technology will increase the 2014 Malibu’s fuel economy by an estimated 5 percent. In a Stop&Start system, the car’s engine will shut off when the driver comes to a stop or idles. Johnson Controls’ AGM battery will power devices during the stop mode and quickly restart the engine when the driver’s foot releases the brake pedal.

AGM batteries are a proven energy storage solution for Start Stop vehicles in Europe, where Johnson Controls has sold more than 21 million AGM batteries since 2001 and now produces more than 4.5 million annually.

The company estimates that more than 80 percent of the new cars built in Europe are expected to include Stop&Start technology by 2018.  Stop&Start vehicles are estimated to grow to 40 percent globally and 35 percent in the U.S.

Customer satisfaction with the technology is high. According to consumer research commissioned by Johnson Controls, 91 percent of Stop&Start vehicle owners in Europe say they are likely to purchase such a vehicle again.

Chevrolet spokesman Chad Lyons said, “We offer Start Stop technology in some of our European products, but the new Malibu’s Start Stop system is the first standard in an automatic car for GM overall.”

PSA announced recently that they will test Ni-zinc batteries for Stop&Start applications. Moreover, I think that Li-ion batteries would be suitable for those application despite their poor cold cranking ability. AGM is, according to me, only a step towards better Stop&Start feature. When Li-ion or Ni-Zn batteries will have a better cold crank ability, they will lead the Stop&Start market. What do you think about that?