A new generation of non-pneumatic tire revealed by Bridgestone

With a structure of spokes stretching along the inner sides of the tires supporting the weight of the vehicle, there is no need to periodically refill the tires with air, meaning that the tires require less maintenance. At the same time the worry of punctures is eliminated. In addition, the spoke structure is made from thermoplastic resin*1 and, along with the rubber in the tread portion, the materials used in the tires are recyclable. Further, by pursuing low rolling resistance and contributing to reductions in CO2 emissions through use of proprietary technologies, Bridgestone believes it is possible to achieve even higher levels of environmental friendliness and safety. Bridgestone is pursuing this technological development with the aim of achieving a “cradle to cradle” process that maximizes the cyclical use of resources from worn tires into new tires and the use of recyclable resources. 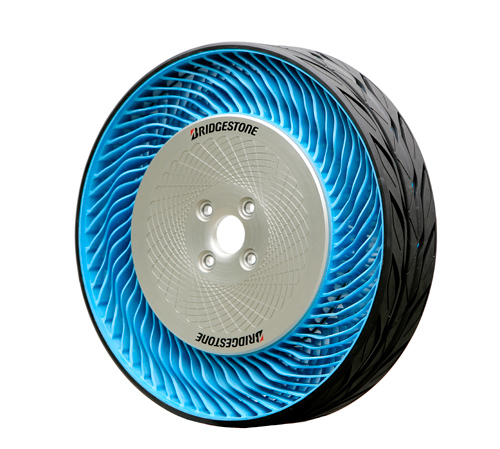 New technologies used in and special features of the second generation tires are as follows.

Bridgestone is optimizing the spoke structure by using high-strength but flexible high-performance resin as a material and employing finite element method (FEM) simulations in the design to reduce stress and deformation in the inner part of the tire. By doing so, the second generation of “Air Free Concept tire” has increased versatility through improved load-bearing capabilities and driving performance compared with the first generation*2. High-speed travel (maximum 60 km/h) in ultralight vehicles*3 has also become possible. 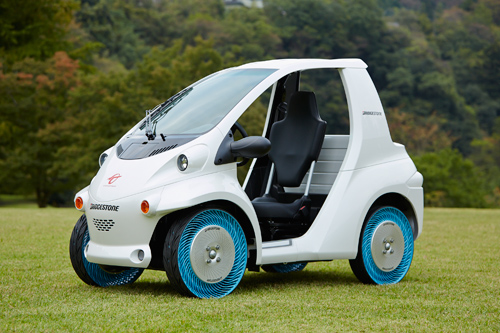 About 90% of energy loss from tire rolling resistance comes from repeated changes in the shape of tires as they roll. In the second generation of airless tires, Bridgestone has succeeded in making a significant reduction in energy loss by using proprietary materials technologies and simplifying the structure of the tires. As a result, these “Air Free Concept tire” have achieved the same level of low rolling resistance as our pneumatic fuel-efficient tires, making possible a contribution to reductions in CO2 emissions.

*1 A synthetic resin that becomes flexible when heated, can be processed into a variety of shapes, and becomes hard when cooled. The changes from heating and cooling can generally be repeated, making it easy to both mold and recycle the material.

*3 Vehicles for one or two people which are more compact than automobiles, have a small turning circle, are highly environmentally friendly, and allow easy local movement.

The airless tire is not a new concept and is under investigation by several tire manufacturers since a while. Do you think that with this concept we are getting close from a serial production? When do you think we will have that on our car?