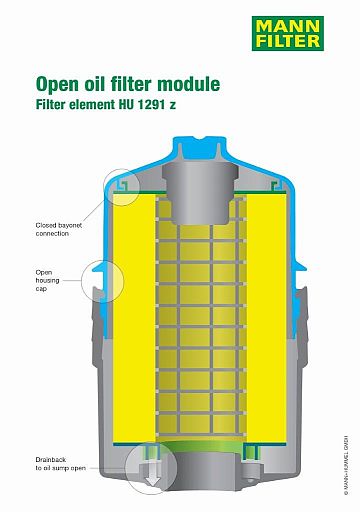 In March, filtration specialist MANN+HUMMEL launched a new oil filter on the market. The MANN-FILTER “HU 1291 z” for commercial vehicles facilitates disassembly in the workshop and saves installation space due to its enhanced filter medium. The company has been granted patents in several countries for the filter element, which features a bayonet connection and double-concentric sealing.

The functional design of the filter element and housing cover makes a better handling possible. When the mechanic unscrews the cover during filter removal, the retaining lugs of the element end plate engage firmly in their counterparts in the cover. During opening, this bayonet connection ensures that the entire filter element is released and lifted out of the socket in the housing without the effort usually necessary.

Open and remove – disassembly designed for a fast service

A single manual action is also sufficient to open the outflow channel to the oil sump, which was previously firmly closed by a double-sided sealing. The double-concentric ring made from long-life, flexible silicone is fitted to the bottom of the element and separates the cleaned lubricant from the raw side. When opening, a pause of about 60 seconds is sufficient to allow the filter element and housing to drain. Only once all the oil has flown into the sump the filter element attached to the cover is pulled out of the housing virtually clean. “The new oil filter from MANN-FILTER works according to the open-and-remove principle. This makes the oil-filter change service in the workshop much easier,” explains Jörg Schömmel, Product Manager Oil Filters at MANN-FILTER. 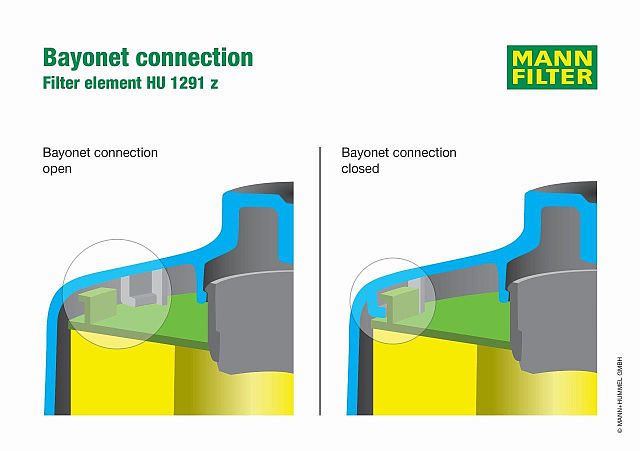 The automotive supplier has been granted a further patent for the new technical development. The German Patent and Trade Mark Office lists MANN+HUMMEL among the most active domestic patent applicants. The company, headquartered in the Swabian city of Ludwigsburg, already holds 3,000 patents and utility models worldwide. In Germany, the international filtration specialist registered 114 patents last year.

Efficiency and compactness claimed by MANN+HUMMEL

A further advantage is the high dust holding capacity of the filtration element of 100 grams in conjunction with low resistance to the oil flow. Due to the high efficiency of the medium, it has been possible to achieve an optimized filter surface area and to comply with the prolonged service intervals of the commercial vehicle manufacturer. “Because we were able to significantly optimize the filter surface area, we have saved valuable installation space”, adds the expert. An additional benefit of the “HU 1291 z” is its metal-free fabrication. The filter element is equipped with a center tube made from plastic and can be incinerated in an environmentally friendly manner.

Aftermarket and maintainability are often neglected when design a part or a system. As engineers, we often look for efficiency, features and cost when choosing a solution. How do you think engineers rank maintainability criterion among other criteria? Do you think that maintainability improvements are done after the main part/system development or during it?