Audi is active in the development of CO2-neutral, synthetic fuels. The latest project is a pilot plant in Dresden that produces diesel fuel from water, CO2 and green electricity. Audi and its project partners Climeworks and sunfire opened the plant today.

With this collaboration, Audi and its partners are demonstrating that industrialization of e‑fuels is possible. The pilot plant was officially brought on stream today in the presence of Prof. Dr. Johanna Wanka, German Federal Minister for Education and Research, and Dr. Hagen Seifert, Head of Environmental Assessments, Renewable Energies and New Materials at AUDI AG. 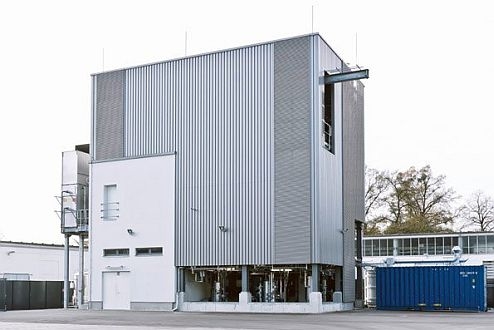 The sunfire plant, which operates according to the power-to-liquid principle, requires carbon dioxide, water and electricity as raw materials. The carbon dioxide is extracted directly from the ambient air using direct air capturing – a technology developed by Swiss partner Climeworks.

In a separate process, an electrolysis unit powered with green electricity splits water into hydrogen and oxygen. The hydrogen is then reacted with the carbon dioxide in two chemical processes conducted at 220 degrees Celsius and a pressure of 25 bar to produce an energetic liquid, made up of hydrocarbon compounds, which is called Blue Crude. This process is up to 70 percent efficient.

As currently built, the pilot plant on the sunfire grounds in Dresden-Reick can produce approximately 160 liters of Blue Crude per day. Nearly 80 percent of that can be converted into synthetic diesel. This fuel – Audi e‑diesel – is free of sulfur and aromatics. It also has a high cetane number, which means that it ignites easily. Its chemical properties allow it to be blended in any ratio with fossil diesel. This means that it can be used as a drop-in fuel.

Audi is combining two technologies in this project, which is funded in part by the German Federal Ministry for Education and Research and was preceded by a two-year research and preparation phase: CO2 capturing from the ambient air and the power‑to‑liquid process for the production of synthetic fuel. Audi is the exclusive partner in the automotive industry.

Audi’s activities in the development of CO2‑neutral fuels extend beyond the partnership with sunfire, however, and started back in 2009. The Audi e‑gas plant in Werlte, Lower Saxony, already produces synthetic methane (Audi e‑gas) in a comparable manner; drivers of the Audi A3 Sportback g‑tron can fill up on it using a special fuel card. Audi is also conducting joint research into the synthetic manufacture of Audi e‑gasoline with Global Bioenergies of France. And a joint project with U.S. company Joule is striving to produce the synthetic fuels Audi e-diesel and Audi e‑ethanol with the help of microorganisms.

CO2 capturing has always been an area of interest for energy companies as it is a potentially free source of energy. However, I doubt that this technology is mature enough yet and competitive in terms of investment costs. When do you think we will see CO2 farms in our landscapes? Who will be the leading companies in this area?
Tweet