A Common Module Family (CMF) is an engineering architecture that covers Renault/Nissan Alliance vehicles, from one or more segments, based on the assembly of compatible Big Modules: engine bay, cockpit, front underbody, rear underbody and electrical/electronic architecture. Therefore, a CMF is not a platform; it can involve several platforms. A platform is a horizontal segmentation; a CMF is a cross-sector concept. 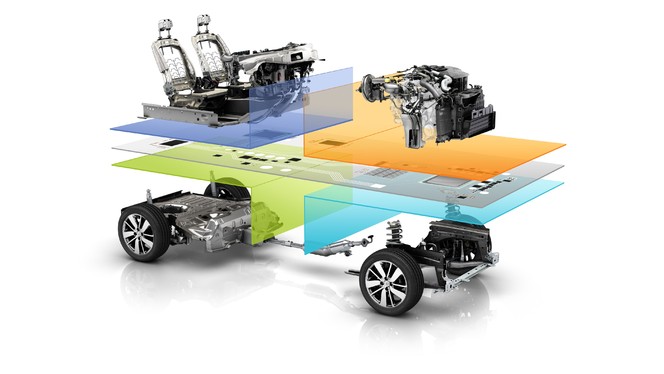 For the Alliance: a new stage with different types of vehicles from different segments

CMF is an additional tool that goes further than carryovers on a single platform, to expand the product range. The trend will be to increase the modules common to several platforms with a view to standardizing components and increasing the number of vehicles per platform. CMF will gradually be extended to Renault and Nissan ranges between 2013 and 2020. CMF will be first applied to the compact and large car segments, then to be followed by models in other segments.

CMF for the compact and large car segments: global coverage

CMF for the compact and large car segments will include 1.6 million vehicles per year and 14 models (11 Renault group + 3 Nissan):

CMF to generate economies of scale and lowers costs

CMF will create an “Alliance parts bank” that is just the right size for a varied product range as close as possible to customer needs.

CMF addresses all items of expenditure, through synergies, shared volumes, economies of scale and shared risks within the Alliance in:

Compared with the savings achieved by commonalization on the B platform (which was originally intended for Modus and Clio for Renault and Micra for Nissan), CMF generates economies of scale through the coverage offered by the Alliance in terms of number of vehicles and geographical regions.

Jean-Michel Billig, Engineering, Quality & IT Director of Renault said: “With CMF, the investments in vehicle architecture and non-visible parts are mutualized, resulting in significant cost reductions that allow us to roll out our innovation policy in terms of environment, safety and new technologies for all our customers.”

Tsuyoshi Yamaguchi, Alliance Director responsible for engineering, said: “CMF opens a new era in engineering synergies for the Alliance. This will enable us to pursue volume efficiencies and introduce attractive new technologies in our products faster than before, creating additional value for our customers.”

This seems to go further than the EMP2 platform presented by PSA. A lot of parts will be common in Nissan and Renault cars in the future thanks to this project. Do you think it will affect the customer perception of Renault or Nissan brand? Will the cars from the two brands be able to be differentiated by the customer in terms of performances, features and quality?