With the E 200 Natural Gas Drive, Mercedes-Benz is adding a new variant to the E‑Class family featuring bivalent drive. It can run on both petrol and natural gas. The benefits of running the car on natural gas include a 20 percent reduction in CO2 emissions compared with comparable operation using petrol, and half the costs for fuel.

The advantages of the E 200 Natural Gas Drive mainly come to the fore when it is running on natural gas. It uses 4.3 kg of natural gas per 100 kilometers (NEDC combined), which corresponds to CO2 emissions of 116 g per kilometer. If the new E 200 NGD automatically switches to running on petrol because the gas tank is empty, its newly-developed four-cylinder engine needs 6.3 liters of unleaded petrol (NEDC combined) for every 100 kilometers driven (CO2 emissions: 147 g per kilometer).

The bivalent drive also offers advantages with respect to the car’s range, which is more than 400 kilometers when running on natural gas. As soon as the gas tank becomes empty, the vehicle automatically switches to run on petrol. This boosts the range of the bivalent natural gas model to more than 1300 kilometers. With the 80-liter petrol tank, the E 200 Natural Gas Drive can drive 1600 kilometers without stopping for petrol. 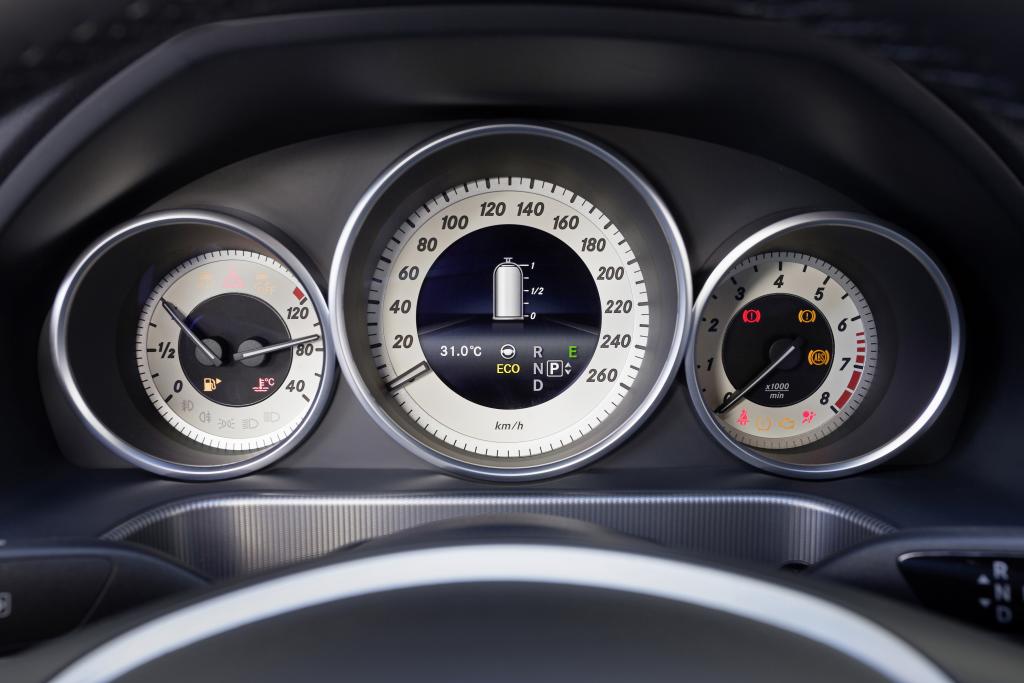 The natural gas is stored in three containers – one behind the rear backrest and two under the floor of the boot. Together they hold 121.5 liters (19.5 kg) of natural gas. Despite the additional gas tank, the boot offers 400 liters of space. The heart of the E 200 Natural Gas Drive is the new four-cylinder petrol engine with spray-guided direct injection, part of the BlueDIRECT family of Mercedes‑Benz petrol engines. The engine generates an output of 115 kW (156 hp) and maximum torque of 270 Nm at 1250 revolutions per minute. The vehicle manages the standard sprint from 0 to 100 km/h in 10.4 seconds, with a top speed of 220 km/h.

Also on board: an ECO start/stop system that adds to the efficiency of the drive system, which allowed to reduce consumption by 1.2 kg of natural gas per 100 kilometers in comparison to the predecessor model. In both natural gas and petrol driving, the vehicle already meets the EU6 standard valid from 2015.

I think it is the first Natural gas vehicle in Europe in the high end segment. Why do you think there is no market for natural gas on this segment so far? Why did Mercedes put this technology on such a conservative market?