Bosch has released a map of the spread and diversity of powertrain technologies around the world. Every fifth new vehicle in Japan is a hybrid, spark-ignition engines predominate in China and diesel holds sway in Europe and India. 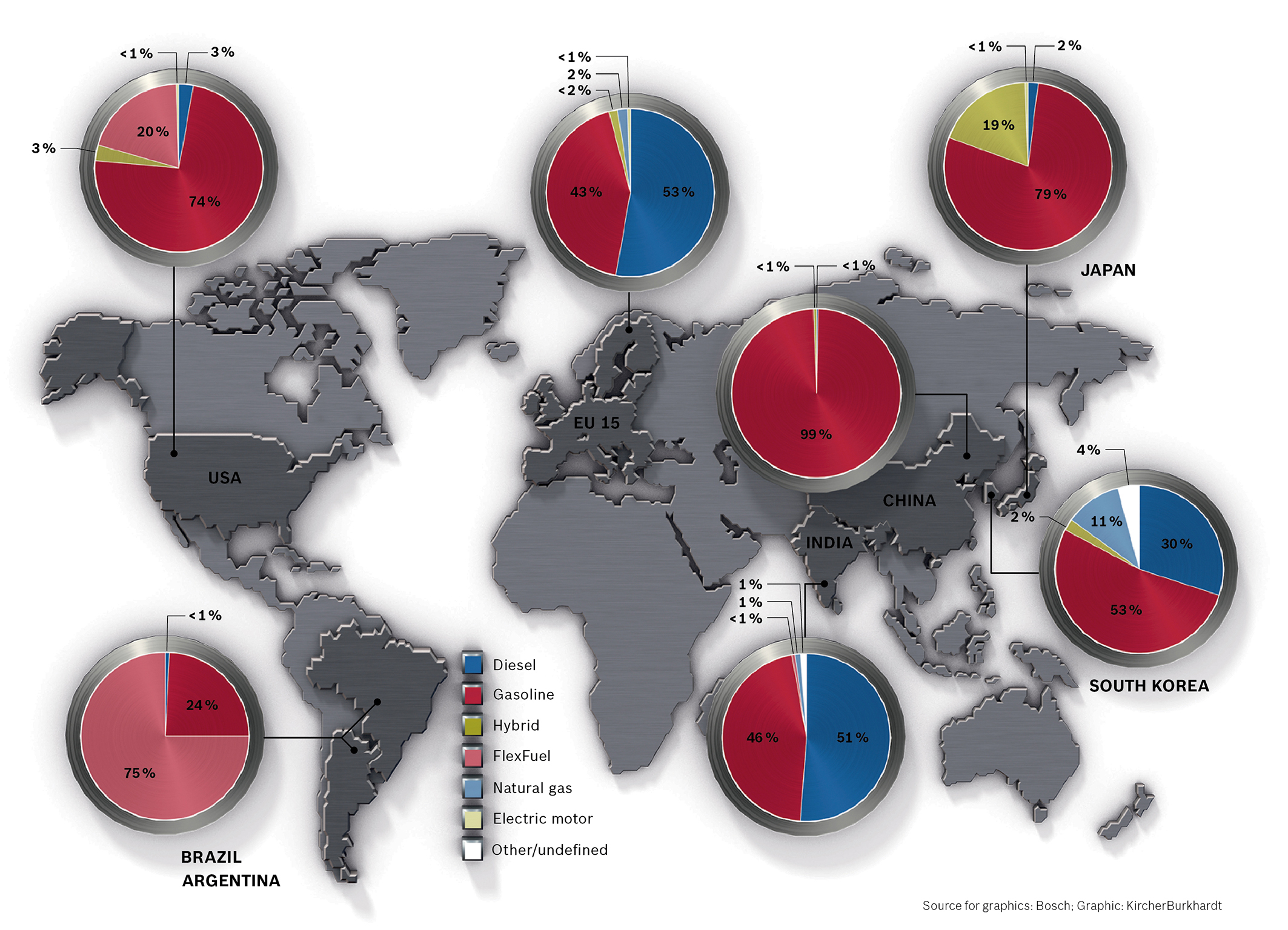 Worldwide, gasoline engines are the most popular powertrain. China leads the field: there, nearly 100 percent of all new car purchasers choose a gasoline engine. In the U.S. and Japan, the figure is roughly 75 percent. Engines with port-fuel injection still feature in more than every second gasoline-powered vehicle. Downsizing is becoming ever more popular, and with it the gasoline direct injection systems. Combining gasoline direct injection with downsizing can reduce fuel consumption by up to 15 percent. At the same time, turbocharging helps the engine deliver more torque, especially at low engine speeds. This improves acceleration and adds to driving enjoyment.

In the EU and India, every second new car is a diesel. But outside these core markets as well, the diesel is becoming increasingly popular. The United States, for example, is a growth market. Bosch estimates that diesel’s market share there will rise from 3 percent today to as much as 10 percent in 2018. In South Korea as well, diesel is becoming more and more popular. For many Europeans, its benefits are already clear: a modern diesel consumes 25 percent less fuel than a comparable gasoline engine, and delivers 40 percent more torque.

In Japan, nearly every fifth new car now features a hybrid powertrain. This makes the country the undisputed pioneer of electrification. In just a few years, registrations of hybrids will be significantly higher outside Japan as well. Bosch forecasts that of a predicted 113 million total vehicles sold worldwide in 2020, 6.5 million will be strong hybrids, 3 million will be plug-in hybrids, and 2.5 million will be all-electric (assuming a total of 113 million vehicles sold in 2020). Even now, Bosch is developing a broad product portfolio for this mass market. It ranges from hybrid systems to plug-in hybrids and powertrains for all-electric vehicles. In addition, Bosch is developing entry-level hybrids based on a 48-volt electrical system.

Powertrains that can drive on both gasoline and alcohol (ethanol) are especially prominent in Brazil. The second largest market for this technology is the United States. The Bosch systems run on pure ethanol as well as any mixture of ethanol and gasoline. Drivers are more independent, since such a flex-fuel system allows them to choose the more affordable ethanol.

Worldwide, CNG powertrains are becoming increasingly popular. For ten years now, sales have been growing worldwide by 25 percent. In South Korea, CNG-powered vehicles have already captured an 11 percent share of the market. CNG is up to 50 percent cheaper than gasoline, and can reduce CO2 emissions by up to 25 percent.

My opinion is that flex fuel technology will disappear even with the arrival of 2nd generation biofuels. The focus will be put on the electrification of powertrains as the image of electricity is “greener” than the one of biofuels no matter how it is generated. Do you believe that the worldwide markets will harmonize in terms of powertrain technology in a near future?
Tweet