The first nine-speed automatic transmission with torque converter, the 9G-TRONIC for premium vehicles, is now celebrating its debut: the E 350 BlueTEC will be equipped with this power transmission.

The drive element of a classic automatic transmission is the hydrodynamic torque converter. In the new 9G-TRONIC, the engineers have improved the hydraulic circuit in the torque converter and increased its efficiency to up to 92 percent. This figure is important for fuel economy, as the losses imposed by physics when transferring the engine torque to the transmission’s input shaft need to be kept to a minimum. In short: the 9G-TRONIC converts a high proportion of the engine power into tractive power. In the first-generation 7G-TRONIC dating from 2003, the efficiency of this component was only 85 percent. 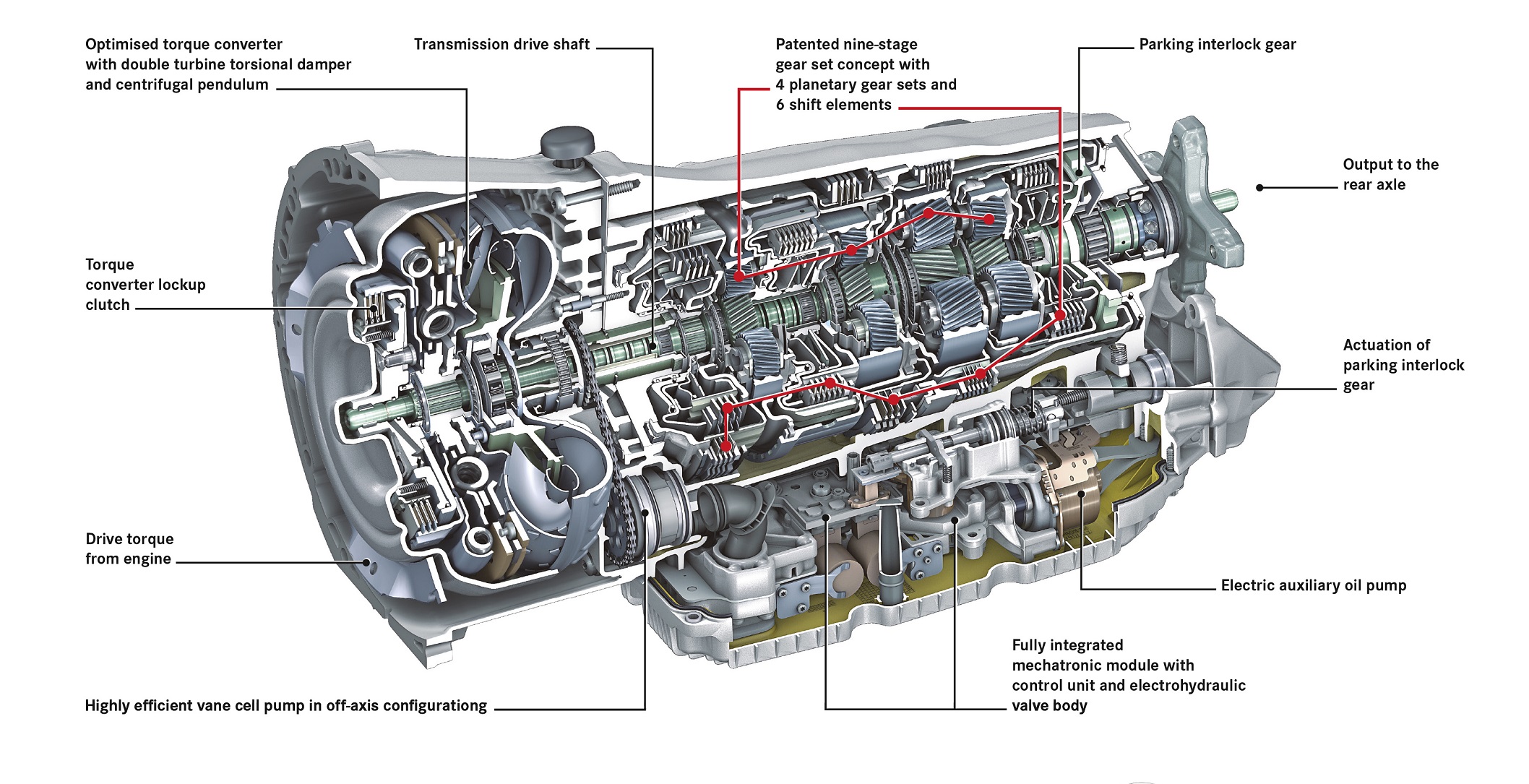 The heat generated during operation is dissipated via the transmission oil cooler. Conversely, the 9G-TRONIC requires no additional radiator to warm the cold transmission oil when cold-starting under Arctic conditions.

One of the most comfort-enhancing and at the same time fuel-saving features of an automatic transmission is the torsion damper, which compensates effectively for eccentricities and vibrations within the transmission. A basic physical law operates in this case: the lower the rpm and road speed, and the lower the number of cylinders, the more pronounced these can be. This results in a conflict of aims between comfort and fuel-efficient operation. It is resolved by the use of a twin turbine torsion damper additionally fitted with a centrifugal pendulum. Depending on the rpm, this shifts the center of gravity.

Moreover, the optimized damping enables slip in the torque converter lockup clutch to be reduced, which likewise contributes to fuel economy.

A return spring has been integrated into the torque converter lockup clutch of the 9G-TRONIC. The multi-disc lockup clutch was previously only hydraulically controlled. Use of the return pressure spring allows activation even at very low rpm.

A computer-based system analysis and mock-up made it possible to realize a nine-speed transmission with four planetary gear sets and six shift elements. Mercedes-Benz has secured a worldwide patent for this specific configuration, which the Mercedes engineers consider to be the best possible.

The ring gear, planetary carrier and center gear in a planetary gear set are connected by carriers and multi-disc clutches, or braked by the multi-disc brakes which are supported by the transmission housing. This enables the planetary gears to transfer drive torque to the inner teeth of the outer ring gear or to the outer teeth of the inner center gear. The result is several gear ratios, and at the same time it is possible to reverse the direction of rotation for e.g. reverse gear.

The gear ratio is the ratio between the number of gear teeth on the driving and transferring gears. Depending on which planetary gear sets are connected in series, blocked or separated, multiplying the part ratios produces the overall ratio for the relevant transmission gear. In the 9G-TRONIC, the individual gears are engaged by three multi-disc clutches and three multi-disc brakes. The purpose of the multi-disc clutches is to transfer the drive torque between two components as a friction connection.

The ratio configuration of gears one to nine allows a ratio spread of 9.15. For the same performance compared to preceding transmissions, the rpm level is lowered – as a factor for the high energy efficiency and NVH comfort of models equipped with the 9G-TRONIC.

To ensure supply of the 2nd-generation synthetic engine oil, the 9G-TRONIC is fitted with two pumps. The mechanical main pump installed “off-axis” lies next to the main shaft and is driven via a chain. In an automatic transmission such as 7G-TRONIC, the main oil pump previously ringed the transmission shaft and was directly driven. This meant that the diameter of the transmission shaft prevented the pump from being reduced in size as desired. For this reason the vane cell pump is now placed alongside the main shaft (“off-axis”), and is reduced in size to suit requirements.

The mechanical main pump, which ensures the oil supply to the electrohydraulically controlled automatic transmission when the internal combustion engine is running, is backed up by a separate electric auxiliary pump. On the one hand this design enables the flow of lubrication and coolant to be controlled actively on demand, and at the same time also means that the 9G-TRONIC can benefit from a start/stop system. In subsequent hybrid applications, this additional oil delivery also allows so-called “sailing”, i.e. maintaining a constant speed without using the internal combustion engine.

When the engine is off – for example at a red traffic light in start/stop mode – the electric auxiliary pump is actuated, ensuring a defined basic pressure and guaranteeing that all necessary functions are maintained. When the driver wishes to move off on a green light, oil delivery by the electric pump after engine-starting guarantees acceleration.  In certain operating states with the engine running, the auxiliary pump also assists the main pump, for example at very low engine speeds or in very high temperatures. In this case the flow of oil is added as needed to ensure smooth gear shifts or when there is a higher cooling requirement.

This oil supply concept using a mechanical main pump and electric auxiliary pump, as well as demand-related control, accounts for around 54 percent of the total fuel-saving potential of the 9G-TRONIC. The relationship is clear: the less oil that has to be moved within the transmission by more efficient pumps, the higher the overall efficiency. The fully synthetic Fuel Economy low-friction oil also contributes to this.

The main transmission shaft is another technical highlight of the 9G-TRONIC. Firstly, it is one of the longest shafts in the entire automotive industry at 550.9 millimeters. Secondly, it performs other functions in addition to its main purpose of power transmission: using a sophisticated internal ducting system, the shaft also performs various lubricating, cooling and control functions.

On the engine side, a large axial hollow-drilled hole measuring a few centimeters supplies the front planetary gear set with oil, which reaches the right places via smaller transverse holes. Three parallel holes each measuring 6.1 millimeters are deep-drilled into the transmission shaft with a core diameter of 16 millimeters to a depth of up to 361.5 millimeters. These three deep-drilled holes have various functions in the 9G-TRONIC: via transverse holes, they ensure a defined oil flow rate to lubricate and cool the planetary gear sets and shift elements. They also perform an important control function, and transfer the set gearshift pressure to the multi-disc clutches and brakes.

The machining of such a shaft is a production engineering challenge. The requirements are particularly exacting when drilling the three deep holes. To illustrate the requirements: Over their entire length of up to 361.5 millimeters, the deep-drilled holes must meet the requirements to a few thousandths of a millimeter. Machining must follow precisely defined geometrical specifications:

The processing time per shaft has been shortened while improving production quality. To minimize cycle times in the production process, the production engineers eliminated the usual guide sleeves when spot-drilling. The machines drill the deep holes “free-hand”, so to speak, while maintaining dimensional accuracy. In addition, the single-fluted drills of cemented carbide allow high working speeds. Whereas the figure was around 125 millimeters per minute in the case of 7G-TRONIC PLUS, the new drills allow a speed of over 250 millimeters per minute. The net result is that it takes less than three minutes to process the main transmission shaft – around 63 percent less than the cycle time during the production of the 7G-TRONIC PLUS.

With the above improvements, Mercedes-Benz is further implementing the “Green Production” project in its production locations.

With the change in generation from the 7G-TRONIC to the 9G-TRONIC, the development engineers placed further emphasis on the area of “compact lightweight design”. Despite two additional gears and a maximum transferable torque of up to 1000 Nm, the new automatic transmission requires the same installation space as its predecessor, the 7G-TRONIC PLUS, and is also one kilogram lighter. 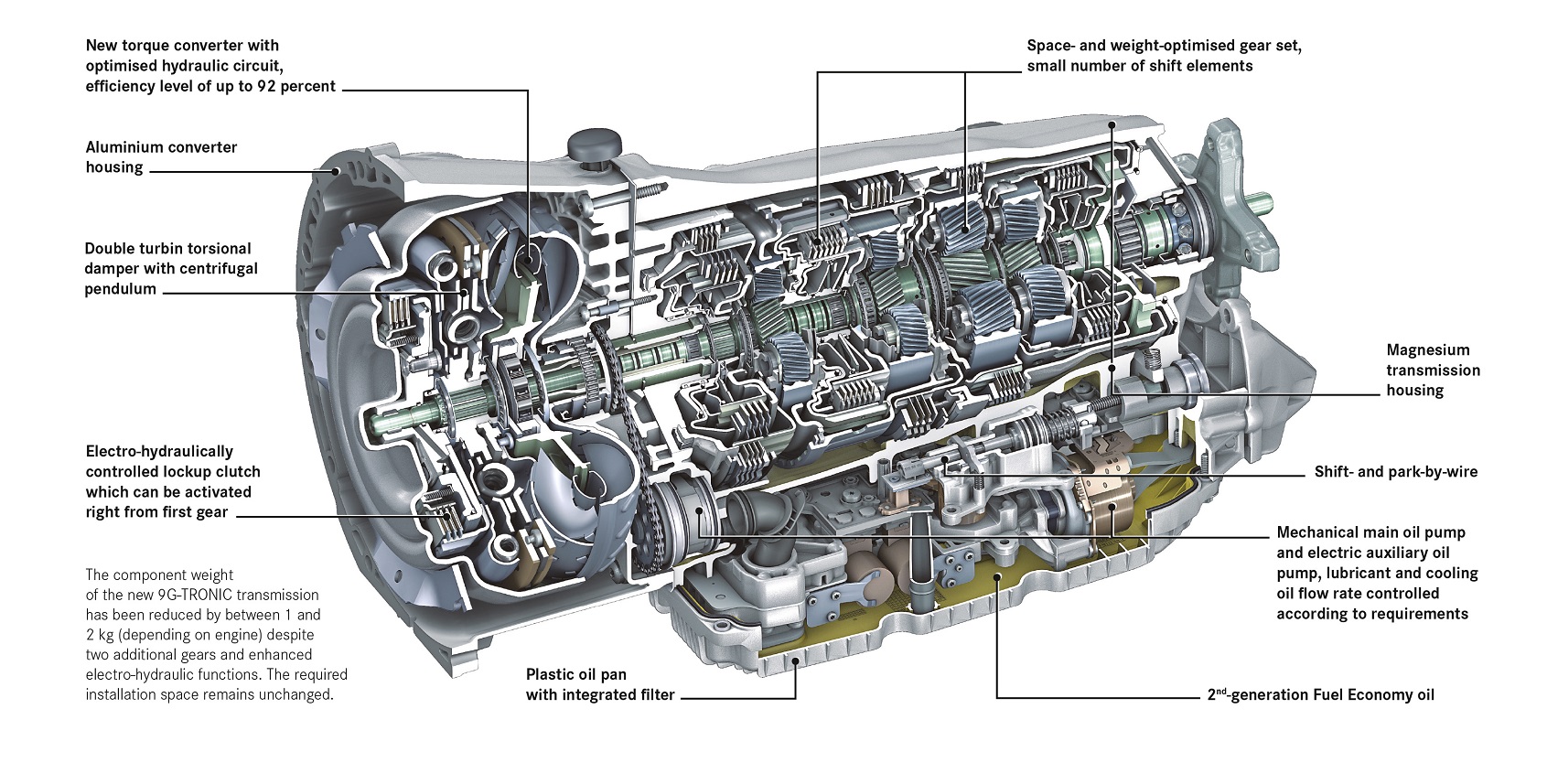 The two-piece housing design has been retained: the torque converter housing is made of lightweight aluminum alloy. The transmission housing with a weight-optimized plastic oil pan is made of an even lighter magnesium alloy.

This gearbox looks like a masterpiece. However it includes a lot of components, a lot of new manufacturing processes and then a lot of complexity. Do you think that this automatic gearbox is mature enough to go on the market? Don’t you think it is risky from a dependability point of view to use only four planetary gear sets and six shift elements?

3 thoughts on “The 9G-TRONIC automatic transmission by Mercedes”