In lighting technology, Audi is driving progress at high tempo. Today, its xenon plus-and LED headlights already provide sufficient illumination of the road and give the cars with the four rings an unmistakable look. In the future, vehicle lighting from Audi will react even more precisely to environmental conditions, and it will feature full electronic control. The first step in this direction will be taken in 2013 in the form of innovative matrix LED headlights.

Daytime running lights, that consist of white light-emitting diodes, are a safety and design feature that reflects Audi’s image among the competition. They made their debut in the Audi A8 W12 in 2004.

In the A1, two light-emitting diodes are used per unit; they emit their light into a transparent polymer tube, the light guide, which generates a uniform contour. In the Audi A7 Sportback, the daytime running lights of the optional LED headlights also appear linear, but they originate from 18 individual LEDs with a polymer body in front of them. The LED daytime running lights consume fewer watts of power, have extremely long life and are maintenance-free.

The introduction of full-LED headlights to the A6, A7 Sportback, A8 – and most recently to the A3 model series -, gives the cars unmistakable styling and a resolute look. The small LEDs can be arranged in lines, and the various lighting functions can be implemented by individually controlling the diodes.

Xenon plus headlights are offered in all Audi models, either as optional or standard equipment. Xenon headlights are gas discharge lamps. Two tungsten electrodes are fused in a quartz glass cylinder, known as the burner, and a concentrated light arc burns between. The xenon inert gas charge in the burner, which is pressurized up to 100 bar, gives off a slightly violet light, while metallic salts in the glass cylinder charge reduce its color temperature to the spectrum of daylight.

Xenon headlights provide a much brighter light and better illumination than halogen headlights with incandescent bulbs, their energy consumption is about 20 percent lower and they have much longer life. In xenon plus technology from Audi, a single burner generates both the low and high beam lights, and they are switched by a moveable shutter.

The LED high-end technology was introduced in the R8 in 2008, and today it is being implemented all the way to the A3 model series. With a color temperature of around 5,500 Kelvin, the LED light resembles daylight, and this reduces eye fatigue. The light-emitting diodes are maintenance-free and are designed to last the life of the vehicle. The low-beam light, for example, consumes around 40 watts, which is five percent less than xenon plus units. 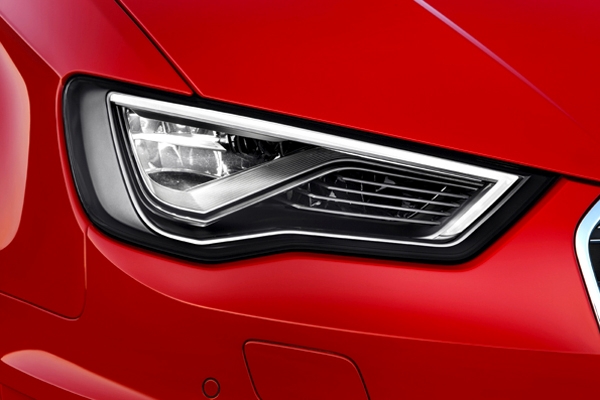 In the new A3, nine LED chips in two free-form reflectors generate the low-beam light, while the high beam uses ten LEDs to emit light through an aluminum trim aperture. The static turning and all-weather lights are housed in a separate module; while the daytime running lights, parking and flasher lights are formed by a light guide that wraps around the upper and inner headlights as a narrow contour.

Unlike incandescent light sources, the light-emitting diodes reach full luminous intensity without any delay – when the driver brakes quickly, for example, the quick reacting brake lights give the driver of the vehicle behind additional valuable fractions of a second in reaction time.

Various adaptive light versions are available for the headlight systems. An electronic control module controls the swiveling xenon plus modules, or the LEDs, so that they always deliver the best possible lighting for city, highway and freeway driving. The driver can configure its mode of operation in the Audi drive select vehicle dynamics system.

One special component of adaptive light is smoothed dynamic headlight leveling. A video camera is used to detect vehicles ahead and oncoming vehicles; then the control module adapts the car’s lighting to the distance to the other vehicles – via a transition that always optimizes the amount of illumination.

In the A6, A7 Sportback and A8 model series, an additional function is activated as soon as the optional night vision assistant detects a pedestrian. The system flashes three light pulses to the pedestrian with the high-beam light according to the specific situation. This clearly highlights the person and surroundings and warns the pedestrian. The system detects any oncoming traffic to avoid any potentially hazardous glare.

Networking of the headlight control module with the MMI Navigation plus system represents a unique selling proposition of Audi. The navigation system’s route data enables such functions as early activation of higher freeway lighting range as the car is about to enter the freeway.

Route data is also used in the city. Close networking lets the lighting systems implement prepared solutions as needed. On city streets, a wider angle of the light pattern better illuminates the areas to the left and right in front of the car. In addition, whether within or outside city limits, the system activates the intersection light immediately before reaching an intersection, which makes it easier for the driver to look down cross streets. Another benefit is that in countries like England the headlights are automatically switched over to left-hand traffic.

In updating its high-performance sports car, the R8, Audi introduced another innovation to production cars – a turn signal with dynamized display. It sends clearer signals to the environment than conventional turn signals. Today, the vehicle behind the car in traffic cannot determine whether a flashing light is a hazard light or a turn signal when the view of the vehicle ahead is partially blocked.

This technology – which is used in the taillights – makes the turn indicators smarter. When operated as turn signal flashers, their light always runs towards the side in the direction the driver wishes to turn. This function is implemented on each side by a band of 30 LEDs with seven segments that are sequentially activated every 150 milliseconds.

The lighting technologies of tomorrow

Audi is already developing tomorrow’s lighting technologies today, and four key trends are clearly discernible here: The Audi vehicle lighting will react even more precisely to conditions of the environment, it will communicate with it in a variety of ways and thereby further increase active safety. Lighting of the future will feature full-electronic control and will be even more attractive and distinctive based on new dynamic functions. 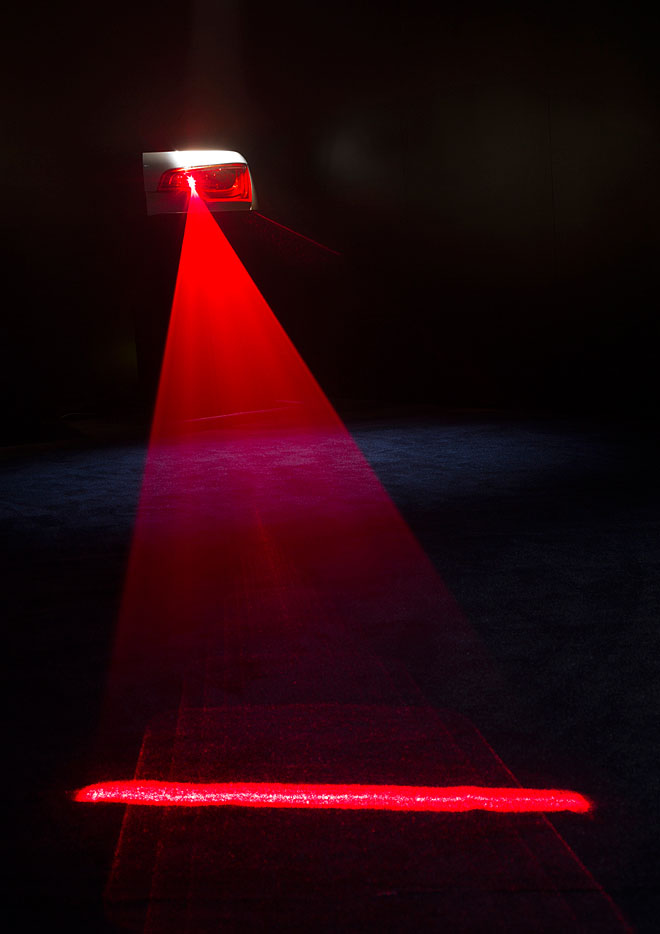 The technology of the future is known as Audi Matrix LED headlights – it subdivides the LED high-beam light into numerous individual segments. The individual light-emitting diodes, which work in tandem with lenses or reflectors in front of them, always deliver illumination, without requiring a swiveling mechanism – instead they are separately activated, deactivated or dimmed according to the situation. This new technology gives engineers and designers more possibilities for configuring the number of LEDs, their arrangement and the size and design of the headlights.

The Audi Matrix LED headlights get the information they need from a camera, the navigation system and other sensors. When the camera detects other vehicles, this causes the high-beam light, which is subdivided into multiple sectors, to be blocked in a certain subarea. In complex situations, the headlights can also illuminate the spaces between several vehicles. The matrix LED headlights will make their debut in 2013.

I think part of Audi’s renewal and increased market share is due to the typical LED headlight they implemented. It is a concrete proof that an innovation can clearly change customer’s perception of a product or a brand and change tremendously company’s results. Do you think this style advantage will last for Audi? Did they protect enough their technology through patenting?