The Formula 1 fuel regulations are strict. They control the formulation by limiting the Hydrocarbons content that go into the final product. An F1 car must race on fuel that is very similar to the unleaded super at the pump and complies with draconian restrictions: except for one point – the octane rating is not limited. Thus, despite an apparent rigor, there is room for maneuver which allows the researchers to make the difference. If the ingredients which make up the F1 fuel are regulated and their proportions controlled, the recipe is almost free.

The new power units have direct injection so the fuel is injected directly into the combustion chamber as in a modern diesel engine: maximum revs are limited to 15 000 rpm. In reality, the combination between the search for reliability, the fuel flow limit and the way the lean mixture works (A lean mixture is defined by an air/fuel ration higher than 14.7, corresponding to stoichiometry of a gasoline fuel) imposes a working rev band of around 11 000 rpm. Nonetheless, because of direct injection this new power unit should be fed by a fuel that vaporizes very quickly. The injection is triggered during the compression phase just before the ignition and the power stroke. It is managed electronically to be as quick as it is accurate. The high pressure injection favors vaporization while the spray of petrol goes into fresh gases and the vaporization can also be enhanced by the quality of the fuel. The sprays should be very short to vaporize quickly without wetting the surface of the pistons or the cylinder sleeves too much. In the past, indirect injection above the valve took more time and the temperature and pressure were less critical.

Running an electric motor on the shaft of the turbocharger by the exhaust gases to generate electricity is an innovative technology to harvest energy. It is efficient, however, only when it can pass the largest quantity of gas at the highest possible speed over the turbo’s hot turbine placed in the stream of the exhaust gases. To do so, it is necessary to make the petrol engine work like a diesel with a considerable excess of air thus creating a very lean fuel/air mixture. In addition to rapid ignition, it is needed to formulate a fuel that provides stable combustion in lean mixture conditions. It must also ensure the cooling and the behavior of the fuel pumps including the feeding pump in the fuel tank, which raises the pressure by a few bars, and feeds the high pressure pump generating the injection pressure.

The role of the fuel can be summed up in just a few words. To liberate the power it has to combust very quickly and thus needs to be vaporized very rapidly in a homogenous manner. After ignition, the spread of the flame must be almost instantaneous without generating knocking. Turbo engines are particularly prone to this phenomenon as they have a higher thermal and pressure load than normally aspirated motors.

Knocking is uncontrolled combustion causing explosions, which spread at high speed in the combustion chamber. This explosive phenomenon produces high-speed pressure waves that bounce off the walls causing oscillations with large amplitude in pressure. The consequences are: sharp sounds, destruction of the internal dynamics of gasses in the combustion chamber, and heat transfer between the burnt gases and the metal. Thus, in a few seconds a piston can be holed or destroyed by fusion. The fuel quality plays an important role in the knock limitation and a higher octane rating will delay the appearance of the knock.

Since 2008, the law imposes ingredients of non-fossil origin in fuels – the bio-fuels. One of the fundamental elements in the recipe is the obligation to incorporate 5.75 per cent (in mass) of renewable ingredients in the fuels. These non-fossil molecules may contain oxygen as well as ethanol and hydrocarbons obtained from decomposition by bacteria of vegetable waste, which are not part of the food consumption chain. They are the second generation or renewable bio-fuels. NB: The oxygen sometimes found in these bio-ingredients limits the calorific power; hence the energy available in the fuel, but it provides ingredients like alcohol, which give a high octane rating. Analyzing the combustion is vital to find the best compromise on the turbo engine between reliability provided by the high octane rating and the maximum power available.

Additives are crucial for the reliability of the engine, both to avoid failure and also the progressive loss of power during its life. Fuel additives will allow to reduce friction on the rings, prevent deposits forming on the pistons crowns and the hot areas of the engine, lubricate the high pressure petrol pumps and prevent the injectors from cocking. These active molecules have different properties: cleaning, anticorrosion, anti-oxidation, reduction of emulsion with the air, modification of the frictions, amelioration of the combustion and the octane rating. 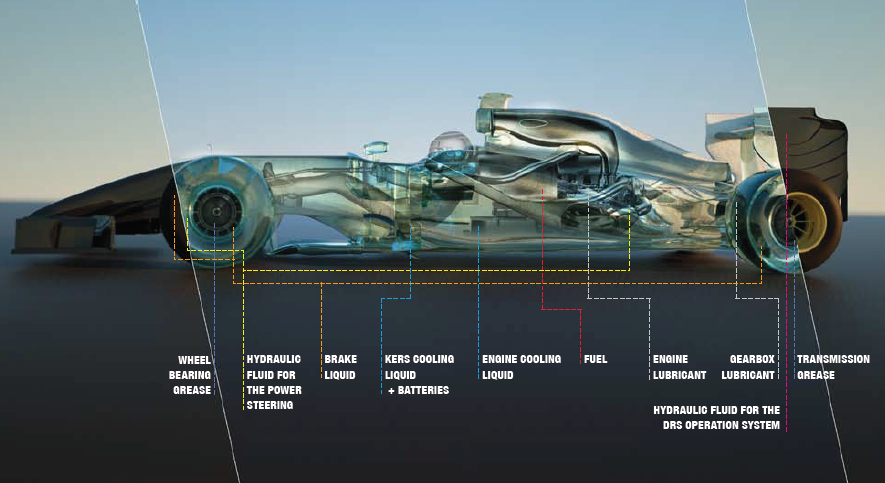 The development of Formula 1 fuels 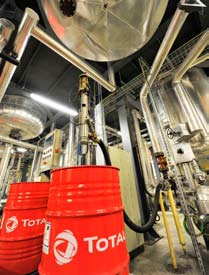 Numerous evolutions of F1 fuels are tested every season. Once the optimum formulation has been chosen and validated by Renault Sport F1, Total homologates the product with the FIA (Fédération Internationale de l’Automobile). It’s the birth certificate of the fuel. Some ten liters are sent to the Federation’s laboratory in Great Britain to receive the legislator’s agreement. The analysis of this sample by gas chromatography gives the genetic code of the fuel, which will serve as a reference until the homologation of the next batch. Another barrel of 25 liters is sent to one of the FIA’s service providers for the calibration of the cars’ fuel flow meter. Each time the formulation changes a new validation is required. The homologation process usually takes three to four weeks.

Analyzing conformity at the grand prix

The FIA takes fuel samples on a random basis during race weekends and also takes a sample from the cars of the drivers who finish in the top 3, another way of saying that Total fuels have undergone the highest number of checks over the past few seasons! Numerous parameters may alter a fuel compared to its homologated content: a solvent still present after cleaning the fuel pump or the fuel tank and evaporation of the lightest molecules if a car has run with a low fuel load. The alteration of the formulation compared to its reference may lead to the disqualification of a driver or his team. To ensure that the fuel used always complies with the registered genetic code Total brings a chromatograph to the circuits. This machine used for checking can identify the molecules present in the fuel on a daily basis.

It seems that constraints are much higher on the fuels this year, with the 2014 V6 engines. How many different formulas do you think Total has made before reaching a satisfactory result for the teams? Do you think that we will see engine breakdowns during 2014’s races or trials due to knock phenomena?