Two figures show that the newly developed AMG 2.0-litre turbo engine is the most powerful series production four-cylinder turbo engine in the world: 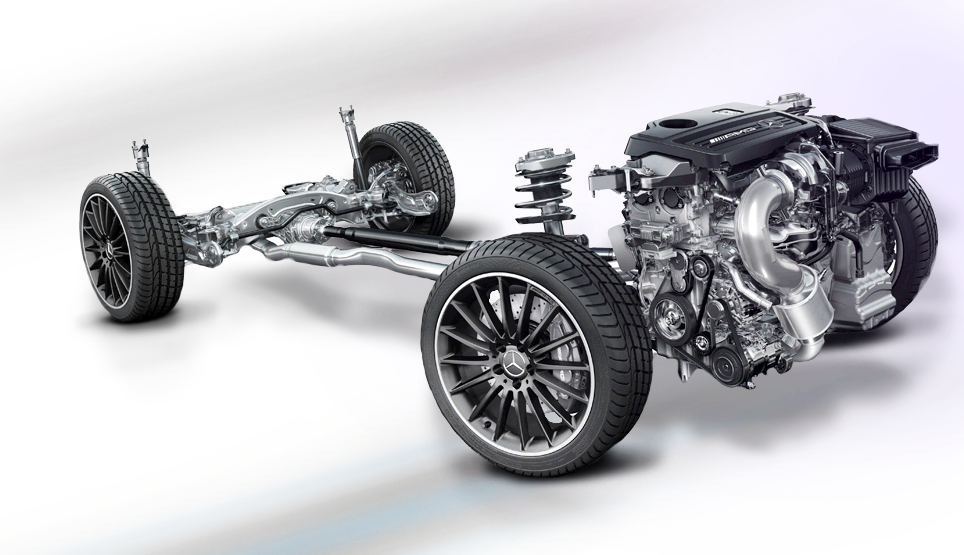 The high power and torque output and the combination with the performance-oriented AMG 4MATIC all-wheel drive as standard lead to enhanced dynamic performance: the A 45 AMG accelerates from zero to 100 km/h in 4.6 seconds, while its top speed stands at 250 km/h (electronically limited). The specially developed AMG engine is also tailored for efficiency – the A 45 AMG leads its segment on this front, with fuel consumption of 6.9 liters per 100 kilometers in NEDC combined mode. This is accompanied by particularly low exhaust emissions: the A 45 AMG already complies with the EU6 emissions standard, combined with the limit for the particle count per kilometer of 6 x 1011 which will be mandatory from 2017.

The AMG 2.0l engine key data at a glance

Mercedes-AMG addresses the essential challenges concerning the response of small-displacement turbo engines by means of a twin-scroll turbocharger, maximum derestriction of the exhaust system and an innovative injection strategy. The twin-scroll technology provides for a more spontaneous build-up of charge pressure (at a maximum of 1.8 bar), making effective use of exhaust gas back pressure, exhaust gas temperature and exhaust gas impulse. This results in a swifter build-up of torque right from the lower rev range. As a positive side-effect, the twin-scroll technology also benefits fuel consumption and exhaust emissions.

The AMG sports exhaust system features large pipe cross-sections and an automatically controlled exhaust flap. This technology, which is familiar from the SLK 55 AMG, reconciles the two apparently conflicting aims of tangible dynamism and hallmark Mercedes comfort on long journeys. The flap is continuously adjusted by map control according to the power called up by the driver, load status and engine speed. The two striking tailpipes of the AMG sports exhaust system emit a full engine sound which is particularly impressive during powerful acceleration. An AMG Performance exhaust system with exhaust flap and featuring a dedicated tailpipe trim design is optionally available for the A 45 AMG. This provides for an even more emotional and striking engine sound when the throttle is open and during gear shifting. The double-declutching function during downshifting and the interruption of ignition and injection during upshifting under full load produce a particularly throaty sound with the AMG Performance exhaust system and create a level of emotionality which is otherwise the reserve of engines with more than 4 cylinders.

High-performance cooling system with components from the SLS AMG

The high driving dynamics of the A 45 AMG call for a highly effective cooling system. On the basis of the components belonging to the SLS AMG, a low-temperature circuit is additionally deployed for air-water charge air cooling of the four-cylinder turbo engine. The large cooler section at the front level of the cooling module is supplemented by an additional cooler in the wheel arch. Together with the charge air cooler which is connected in series, a high-performance electric pump ensures the required flow through the water coolers located behind the large intake ports. This provides for ideal cooling of the highly compressed charge air, thereby contributing towards optimum engine performance. Cooling of the transmission oil is integrated in the water cooling circuit for the engine. The water cooler positioned behind the front apron is supported by the heat exchanger which is fitted directly on the transmission and supplied with cooling water as required by means of an auxiliary pump. 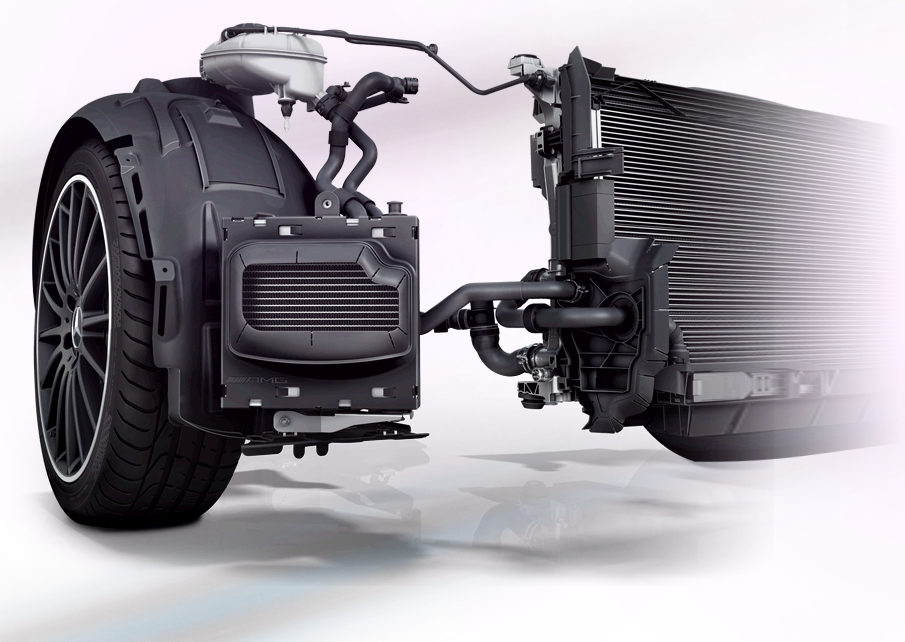 I’m quite surprised by the results engineers achieved with this engine. The compression ratio is very low, which means that the engine might not be very efficient even if spark advance can be increased to get more output. It seems that the engine output was favored compared to fuel efficiency in development phase. But how could we explain that the homologated fuel consumption is lower to other 2.0l engines (e.g. Mégane 3 RS, 8.4l/100km) with a higher output?

5 thoughts on “Mercedes A 45 AMG: The most powerful 4-cylinder turbo engine in the world”