A driving cycle commonly represents a set of vehicle speed points versus time. It is used to assess fuel consumption and pollutants emissions of a vehicle in a normalized way, so that different vehicles can be compared. The driving cycle is performed on a chassis dynamometer, where tailpipes emissions of the vehicle are collected and analyzed to assess the emissions rates.

In commercial vehicles area, the driving cycle is not performed on a vehicle dynamometer but on an engine dynamometer and is evaluated through a set of engine torque and speed points instead of vehicle speed points.

There are two kinds of driving cycles, the modal cycles as the European standard NEDC, or Japanese 10-15 Mode and the transient cycles as the FTP-75 or Artemis cycle. Main difference is that modal cycles are a compilation of straight acceleration and constant speed periods and are not representative of a real driver behavior, whereas transient cycles involve many speed variations, typical of on-road driving conditions. 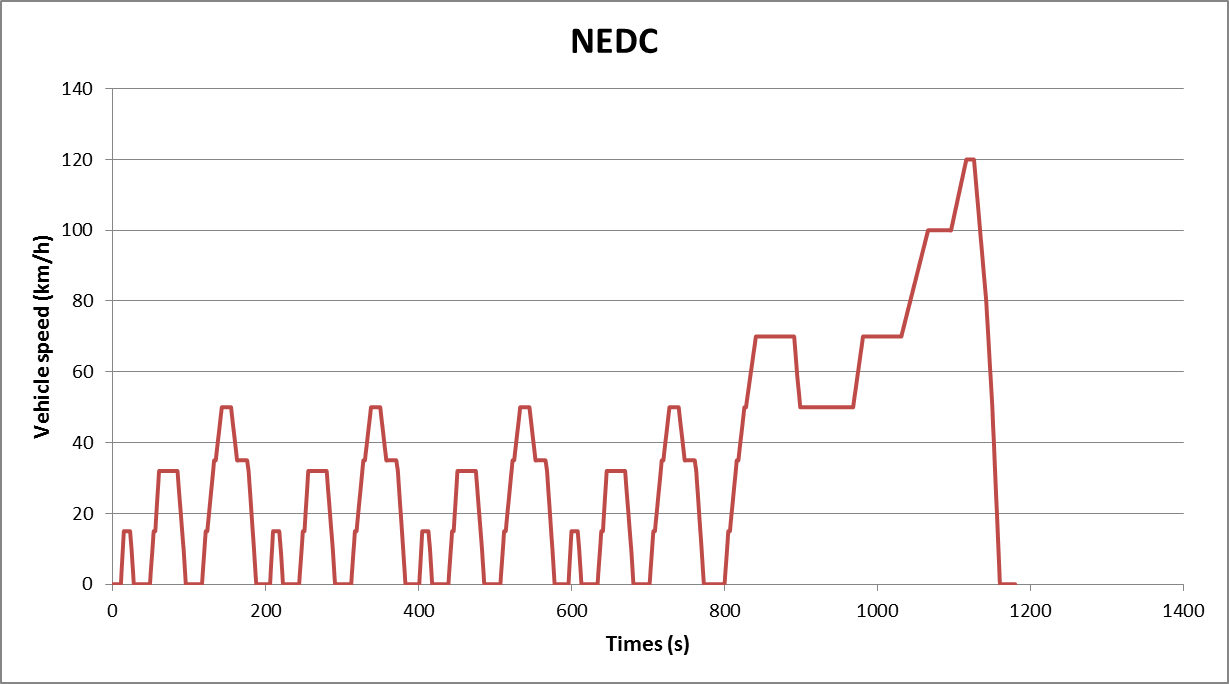 The NEDC is used as reference cycle for homologating vehicles until Euro6 norm in Europe and some other countries. It is made of an urban part called ECE, which is repeated four times, and an extra-urban part, the EUDC.

This cycle is criticized by experts as it doesn’t represent real life driving conditions. Indeed, accelerations are very soft; there are a lot of constant speed cruises and a lot of idle events. This make impossible to obtain certified values when driving with the vehicle in real conditions. For those reasons, a solution to replace the NEDC is being explored by European authorities. The new cycle called Worldwide Harmonized Light Vehicle Test Procedure (WLTP) will probably appear for the upcoming norm Euro7.

This cycle is based on a statistical study done in Europe within the so called Artemis project. It is made of 3 different configurations, plus an additional variant: the urban cycle, the rural one, the motorway 130 km/h and the motorway 150 km/h.

Here are the main characteristics of the cycles:

Artemis cycles are not used for certification of pollutants or fuel consumption. However, car manufacturers use this kind of cycle to better understand real driving conditions and to assess real performances of their vehicles.

Note that it exists several other cycles more or less used by car manufacturers like the modem-Hyzem cycle that will not be described in this featured article.

The FTP cycle (for Federal Test Procedure) has been created by US EPA (Environmental Protection Agency) to represent a commuting cycle with a part of urban driving including frequent stops and a part of highway driving.

In 2007, EPA decided to add 3 more cycles to the existing ones, in order to better reflect real world driving conditions.

The first one is the US06, which is a complement to what is missing in FTP-75 cycle. Indeed, this cycle has a higher top speed of 80 mph (130 km/h) and some higher acceleration which represents a much more aggressive driving behavior.

The SC03 is another added cycle which particularity is to be performed at 35°C ambient temperature. This is needed for taking into account the air-conditioning in fuel consumption and emissions calculations.

The last added cycle is the “cold cycle”. This is in fact a FTP-75 performed at -7°C ambient temperature.

The 10-15 mode Japanese cycle is being used for emissions and fuel consumption certification in Japan. It simulates both urban and motorway cycle, including idling, accelerations, cruising and decelerations. The measurements are performed while engine is hot, after a standard warming procedure.

This cycle has the same disadvantages as the NEDC, that’s why Japanese authorities and manufacturers decided to switch to a more realistic cycle starting from 2011, the JC08 cycle.

The JC08 is a transient cycle which is much more demanding than 10-15 mode cycle. It is performed both with cold and warm start and it represents driving in congested condition, with strong accelerations and decelerations.

Like previous cycles, the Worldwide Harmonized Light vehicles Test Procedures (WLTP) is a test performed on chassis dynamometer. It allows to evaluate the pollutants and emissions, the fuel economy but also the electric range of light duty vehicles (passenger cars and vans). It is developed by European, Japanese and Indian experts in order to replace the NEDC cycle by 2013-2014.

This cycle is made of low and medium speed zones.  It is typical of low power vehicles that can be found in India.

As said earlier, heavy duty vehicle’s emissions and fuel consumption are assessed on engine test bench and not on vehicle test bench. It exists two world harmonized cycles used for homologation that are represented by a set of normalized engine load and engine speed (in % of maximum speed and load) versus time, the first one is stationary (WHSC for World Harmonized Stationary Cycle) and the second one is transitory (WHTC for World Harmonized Transient Cycle).

The WHTC is depicted below: 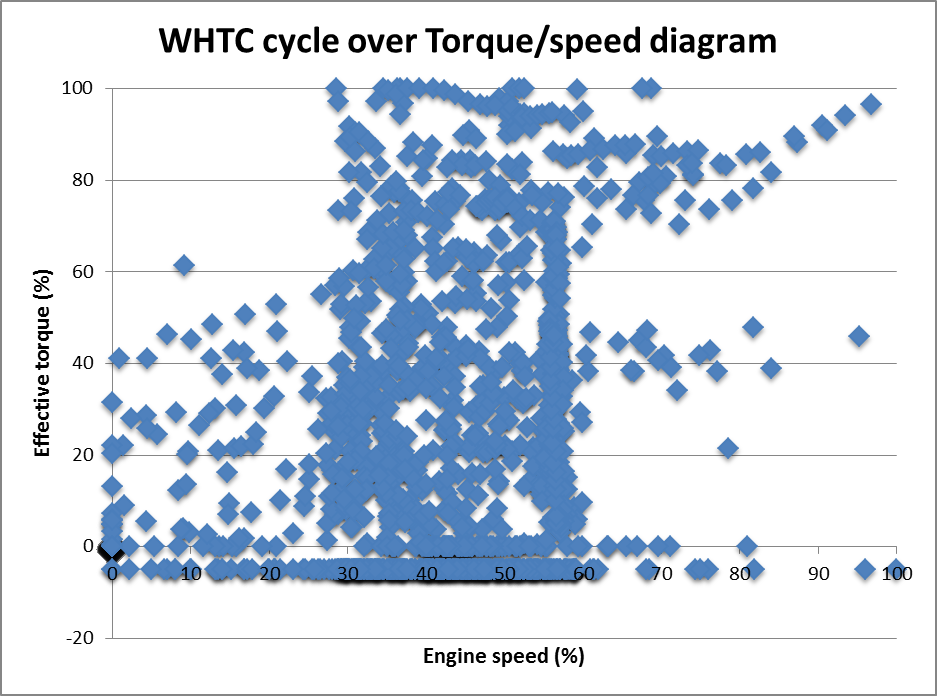 Note that the negative values are set arbitrarily to represent friction losses.

Test cycles are today the only standard way to assess if the emissions legislation are fulfilled by vehicle manufacturers. Those tests have to be designed in a way that enhances the reduction of pollutants and CO2 emissions while it is not too restrictive in order to let the business be opened to several manufacturers and let competition go. Indeed this dilemma is tricky to handle by governments that are often tempted to favor local manufacturers when choosing the cycle that will be used for testing. Do you think we should design cycles that are not too restrictive in order to avoid reducing the number of models that can pass the test cycle satisfying regulations? Do you think that upcoming WLTP will reshuffle the automotive industry in Japan, Europe and India?