Mitsubishi Motors has been focusing for a long time on technologies to controlled valve timing and amount of lift with the aim of achieving high power output, low fuel consumption, and low exhaust emission. The MIVEC engine was first used in 1992 in the Mirage, and since then they have been adding a number of enhancements to produce a better performance. In the Outlander launched in 2005 and Galant Fortis launched in 2007, they adopted a mechanism that continuously controls the intake and exhaust valve timing.

In addition, they have incorporated the following new technologies in the 4B1 MIVEC engine series in order to further improve the performance.

Mitsubishi incorporated the following weight reducing technologies to reduce the dry weight of the 4B12 engine by 16 kilograms compared to the former engine model (4G69).

Reducing the weight of the engine naturally leads to increased acceleration performance and fuel economy. It also contributes to handling performance.

Reducing friction is an effective way to improve output and fuel economy. With the 4B1 engine series, they adopted the following items to reduce friction.

In order to reduce exhaust emission, Mitsubishi adopted a rear exhaust layout. They shortened the distance from the exhaust port to the under-floor catalyst, so that the exhaust gas reach the catalyst without its temperature dropping, which made quick activation of the catalyst for cold-start possible. For this reason, they removed the former closely-coupled catalyst in the exhaust manifold in the Outlander and realized a better environmental.

The 6G75 (V6 3.8-liter) engine installed in Pajero uses a mechanism that switches the valve timing and the amount of valve lift of the dual-intake valve camshaft according to the number of revolutions, from the low speed mode to the high speed mode as explained below: 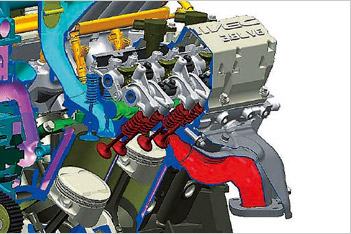 As a short conclusion, thanks to these innovations, Mitsubishi MIVEC engine managed to respect 2010 norms meanwhile performances and fuel economy were improved.

This engine combines several innovations in particular on valve train side which enables a better trade-off between performances and emissions. This is a complex solution in terms of development, however it is less costly than hybridizing the powertrain and less intrusive in the vehicle integration. To me, variable valve actuation and timing are the best way to increase performance, reduce emissions and fuel consumption at a reasonable price, depending on the vehicle segment of course. The question would be which variable valve actuation system is the most efficient: This one, the fiat multi-air system or the complete camless system currently developed by Valéo? At which point this kind of technology becomes less favorable than hybridization? Is there the same potential for diesel engines?