If your vehicle has ESP® on board, it provides you with two other active safety systems: the Antilock Braking System ABS and the Traction Control System TCS. ABS prevents the wheels from locking during braking; TCS prevents the wheels from spinning when starting off and accelerating. While ABS and TCS intervene on a vehicle’s longitudinal dynamics, ESP® additionally improves the lateral dynamics, thus ensuring stable driving in all directions.

How does ESP® work?

Skidding is one of the main causes of road crashes. International studies show that at least 40 percent of all fatal traffic crashes are caused by skidding. ESP® could prevent up to 80 percent of all skidding crashes. ESP® recognizes if skidding is imminent and intervenes very quickly. The driver stays in control of the vehicle and does not get into a skid provided that the physical limits are not exceeded.

ESP® is always active. A microcomputer monitors the signals from the ESP® sensors and checks 25 times a second, whether the driver’s steering input corresponds to the actual direction in which the vehicle is moving. If the vehicle moves in a different direction ESP® detects the critical situation and reacts immediately – independently of the driver. It uses the vehicle’s braking system to “steer” the vehicle back on track. With these selective braking interventions ESP® generates the desired counteracting force, so that the car reacts as the driver intends. ESP® not only initiates braking intervention, but can also intervene on the engine side to accelerate the driven wheels. So, within the limits of physics, the car is kept safely on the desired track.

ABS, TCS, and ESP® were all introduced first to the market by Bosch. 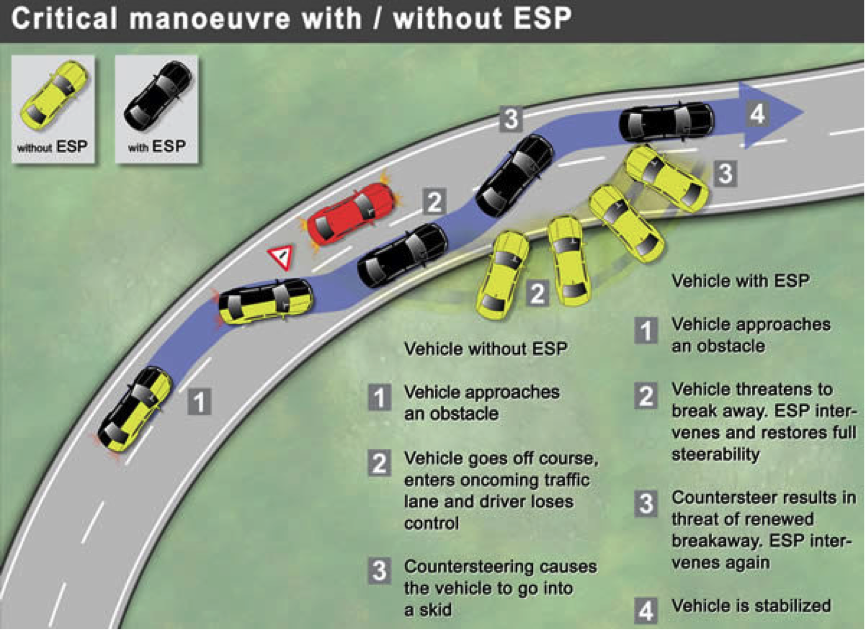 Components of the Electronic Stability Program ESP ® from Bosch 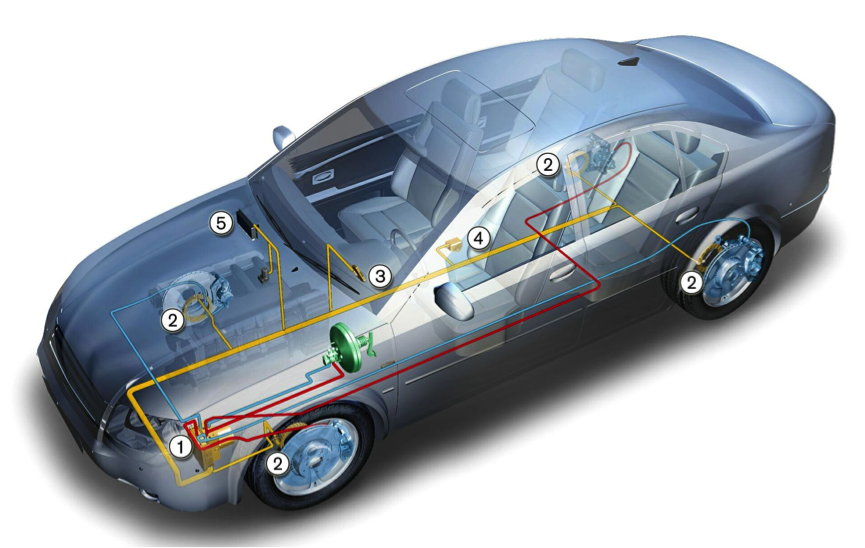 The hydraulic unit executes the commands from the control unit and regulates, via solenoid valves, the pressure in the wheel brakes. The hydraulic modulator is the hydraulic connection between the master cylinder and the wheel cylinders. It is located in the engine compartment. The control unit takes over the electrical and electronic tasks as well as all control functions of the system.

The control unit uses the signals from the wheel-speed sensors to compute the speed of the wheels. Two different operating principles are used: passive and active wheel-speed sensors (Inductive and Hall-effect sensors). Both measure the wheel speed in a contact-free way via magnetic fields. Nowadays active sensors are mostly employed. They can identify both the direction of rotation and the standstill of a wheel.

A yaw-rate sensor registers all the movements of the vehicle around its vertical axis. In combination with the integrated lateral-acceleration sensor, the status of the vehicle (actual state) can be determined and compared with the driver’s intention.

Via the data bus, the ESP control unit is able to communicate with the engine control unit. In this way, the engine torque can be reduced if the driver accelerates too much in certain driving situations. Similarly, it can compensate for excessive slip of the driven wheels provoked by the engine drag torque.

Euro NCAP test with and without ESP

The fundamental task of ESP® is to prevent skidding. The possibilities offered by the ESP®, however, go beyond this. As ESP® can build up braking pressure independently of the brake-pedal position, a series of so-called value-added functions can be realized with ESP®. These provide additional driving safety and allow the driver to experience enhanced driving comfort and driving agility.

Hill starts are not always easy, particularly when the vehicle is heavily loaded. The driver has to operate brake, accelerator and clutch pedals very fast in order to prevent the vehicle from accidentally rolling backwards. The ESP® Hill Hold Control facilitates a hill start by keeping the brakes applied for about two more seconds after the driver has already released the brake pedal. The driver has enough time for changing from brake to accelerator pedal without using the handbrake. The vehicle drives off comfortably and without rolling backwards.

In critical driving situations, drivers often brake too hesitantly. The Hydraulic Brake Assist identifies an imminent emergency braking situation by monitoring the pressure on the brake pedal as well as the pressure gradient. If the driver does not brake strongly enough, the Hydraulic Brake Assist increases the brake force to a maximum. The stopping distance is then reduced.

The volume and position of a commercial vehicle’s load can vary considerably from trip to trip. The load has an important impact on the braking, the traction, the cornering ability and the roll-over tendency. The ESP® Load Adaptive Control identifies changes in the vehicle mass and center of gravity along the longitudinal axis of the vehicle and adapts the interventions of the safety systems ABS, TCS and ESP® to the vehicle load. In this way, Load Adaptive Control optimizes braking effectiveness, traction and stability. In addition, it reduces the risk of roll over via the improved utilization of Roll Over Mitigation and minimizes brake-pad wear by optimizing the distribution of braking forces.

The loading and the higher center of gravity of light commercial vehicles make them reach a critical lateral acceleration faster than passenger cars. The risk of roll over is thus considerably higher. The Roll Over Mitigation function constantly monitors the vehicle behavior with the help of the ESP® sensors and intervenes when the vehicle threatens to roll over. Roll Over Mitigation brakes individual wheels and reduces the driving torque to prevent roll over and to stabilize the vehicle.

A loss of tire pressure leads to a deviant rotation speed of the wheel concerned. By comparing the wheel speeds a potential tire deflation is detected. This value-added function permits tire pressure monitoring without the use of pressure sensors in the tires.

Trailers sway easily. A minor steering error, a gust of wind or a bump on the road surface can cause a critical increase in the swaying movement. The counter steering and the acceleration of the towing vehicle make the critical situation even worse. With the help of the ESP® sensors, Trailer Sway Mitigation identifies these swaying movements of the trailer and intervenes by braking individual wheels of the towing vehicle. The vehicle and trailer are slowed down to an uncritical speed and stabilized. 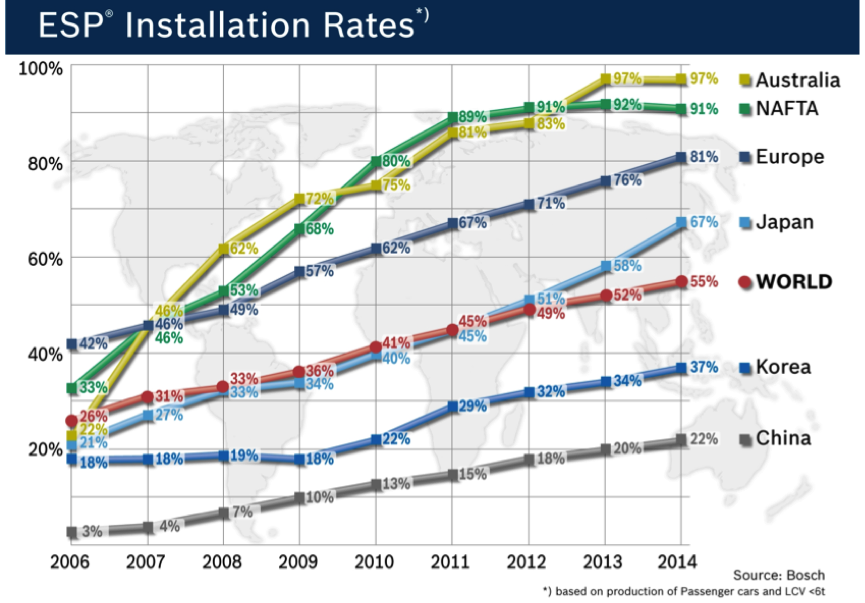 Already in 2007, the US National Highway Traffic Safety Administration (NHTSA) issued the Federal Motor Vehicle Safety Standard No. 126 to make ESP® mandatory from September 2011 onwards for all new vehicles with a total gross weight of up to 10,000 pounds (approx. 4,536 kg). NHTSA had calculated that the standard equipment of ESP® could save up to 9,600 lives and prevent as many as 238,000 injuries every year in the U.S. alone.

In Canada, all vehicles with a total gross weight of up to 10,000 pounds (4,536 kg) sold after September 2011 have to be equipped with ESP® as standard. Furthermore, there are currently negotiations being conducted with the Canadian car manufacturers to increase the fitment of ESP® on Canadian vehicle models before 2011.