In a 4 stroke engine, piston strokes (movement from Bottom Dead Center to Top Dead Center or the opposite) are necessary to complete a working cycle.

Intake stroke (from TDC to BDC): fresh mixture in SI (Spark Ignition) engine or fresh air in diesel engine is intaken into the cylinder through the intake valves, which can open with a light advance before the TDC and can close with a certain delay after the BDC, to maximize the mass inducted.

Compression stroke (from BDC to TDC): fresh mixture in SI engine or fresh air in diesel engine is compressed with all valves closed. Towards the end of the compression stroke, the combustion is initiated via spark ignition (Spark Ignition engine) or fuel injection (diesel engine).

Power stroke (from TDC to BDC): the hot burned gases expand, pushing down the piston and applying on it a work which is five times (or more) greater than the work applied by the piston during the compression stroke. Towards the end of power stroke, the exhaust valves can start to open and part of the burned gases are expelled from the cylinder thanks to the pressure differential.

Exhaust stroke (from BDC to TDC): the piston expels the remaining burned gases. Towards the end of the exhaust stroke, the intake valves can open while shortly after the TDC the exhaust valve can close, this is called an overlap. After that, a new cycle can begin.

Although the cycle is completed in 4 strokes in 2 crank revolutions, there are 6 operating phases that can be highlighted, since different phases may occur during a single stroke:

It should be noticed that 2 operating phases are requested to replace the burned gases with fresh mixture.

In order to obtain higher power output, the two strokes used for the gas exchanges are suppressed, and substituted by scavenging process. The scavenging process is defined by the displacement of the burned gases when the piston is approaching the end of the power stroke by means of a fresh charge which has been pressurized.

In the simplest design, the fresh charge has been pressurized thanks to the crankcase itself, the volume of which varies in opposition with the cylinder volume, so that the minimum crankcase volume (and then the maximum pressure) is reached when piston is at the BDC in the main cylinder.

A more compact design in comparison with 4 stroke engine is possible because the intake and exhaust valves can be replaced by ports (holes) in the cylinder liner, the opening and closing of which can be directly controlled by the piston motion.

The two strokes are the following:

Compression stroke: after closing the inlet and exhaust ports, the piston compresses the cylinder charge (in the meantime, the volume in the crankcase increases, drawing fresh charge into the crankcase by depression). Towards the end of the compression stroke, the combustion is initiated by spark ignition (SI engine) or fuel injection (diesel engine).

Power stroke: the hot burned gases expand, pushing down the piston. Towards the end of this stroke, the exhaust port opens and part of the burnt gases are expelled from the cylinder thanks to the pressure differences. Afterwards, the scavenging ports are opened, and the pressurized fresh charge moves out the burned gases, so that a new cycle can start again after the piston has reached the BDC.

Again, as for the 4 stroke engine, 6 different phases take place during the 2 strokes:

However, to achieve such a cycle, a pressure controlled valve on the scavenging port is needed. If simple ports in the cylinder walls are used, the intake port edge must be in a lower position than the exhaust port, to allow the blowdown phase. This would cause a short circuit of part of the induced fresh charged at the beginning of the compression stroke, as the exhaust port remains open for a while after the intake port closure. 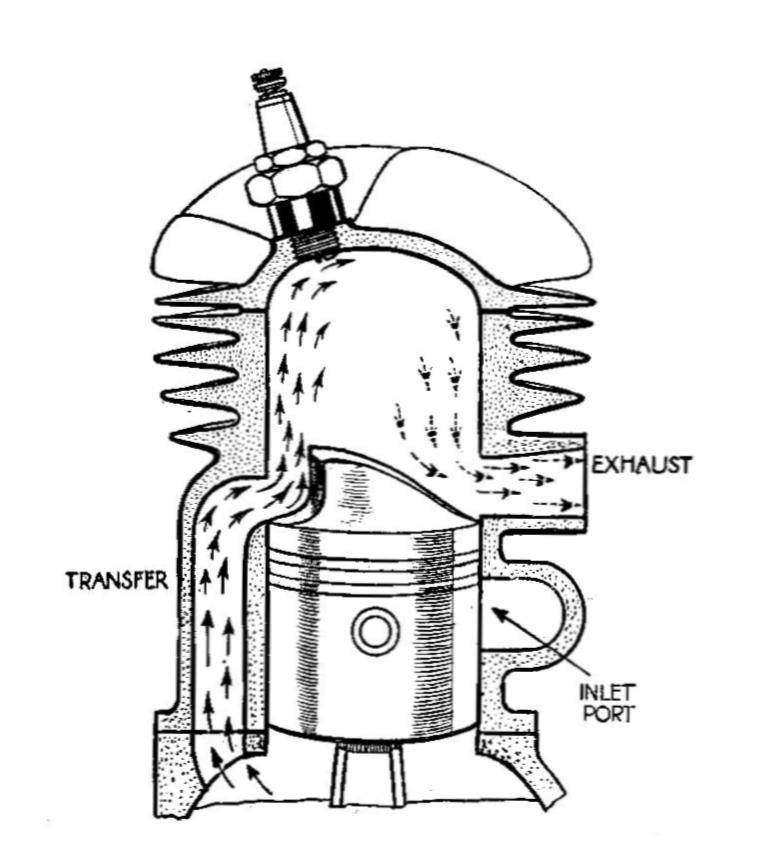 The scavenging process represents the Achille’s heel of the 2 stroke engine, since in its simplest layout with simple ports in the cylinder walls, part of the fresh charge will flow directly to the exhaust port, causing high fuel consumption and HC emissions in SI engine.

For those reasons, the use of 2 strokes SI engines has been limited to small power utility engines (such as lawn mowers, saw chains, outboard engines for boat propulsion…), where the cons were thought to be acceptable due to the high simplicity, low cost and high power density of these engines.

2 strokes engines are also used for large diesels for marine and stationary applications (about 1 meter bore) where they are usually preferred to 4 strokes due to the excessively high thermo-mechanical stresses that valves should withstand (stress increases with valve diameter, which is proportional to cylinder bore).

Currently there are no application examples of 2 strokes in the automotive area.

Basic 2 stroke and 4 stroke engines have nearly opposed characteristics. However, some studies are on-going to take benefit of one type and applying it to the other type of engine, like direct injection for 2 stroke engine as an example. Do you think that 2 stroke will appear in automotive industry for unconventional needs like range extender application for series hybrid? Do you think weaknesses of 2 stroke engines will be overcome to take place in the Internal Combustion Engine today’s mix?