Light technology focus form part of a continuing tradition at Mercedes-Benz: over 120 years of headlamp technology stand for ongoing progress in the interests of enhanced road safety and the introduction of innovations to benefit the company’s customers and other road users.

“Enabling ideal visibility in all driving situations without dazzling other road users has always been our credo in developing new light systems,” observes Uwe Kostanzer, head of light systems development at Mercedes-Benz. “We are pursuing the further development of LED technology to this end.”

When it comes to the number of pixels, the same is true of LED headlamps as of a digital camera: the more the better. The higher the number of individually controllable pixels, the more finely the light can be controlled and adapted to different conditions. A high resolution enables an increase in both precision and brilliance.

In 2014, Mercedes-Benz introduced the Multibeam LED headlamps in the CLS-Class. These are fitted with 24 individual high-performance LEDs. Each one of these LEDs can be individually electronically controlled. ‘Gridding’ the light in this way allows the light distribution from the right and left headlamps to be controlled entirely separately and adapted to the traffic conditions.

This enables the individual areas of the road surface to be illuminated in a very specific manner. The headlamp control technology combines the gridded light source with the mechanical technology of the LED Intelligent Light System, and the LEDs provide for a range of 485 meters.

The added safety provided by the Multibeam LED technology becomes apparent in real traffic situations: in contrast to static high beam systems, some of which have long ranges, Multibeam LED also supports the driver when there are other vehicles in the field illuminated by the headlamps. By means of totally independent control of the individual LEDs of the gridded light source, the Multibeam LED headlamp is able to mask other road users out of its light distribution in a fraction of a second, thereby enabling high beam to remain on. This assures the driver of the best possible light performance at all times, without dazzling other road users. 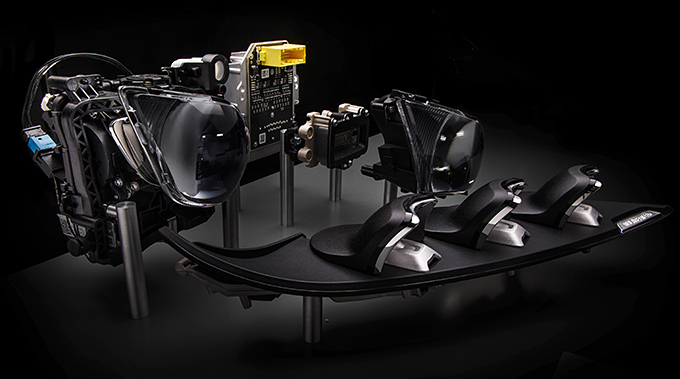 In the near future, Mercedes-Benz will be incorporating an additional HIGH RANGE LED high beam into its LED headlamps. This additional high beam employs high-performance LEDs to provide high beam ranges of over 600 meters in driving situations without any oncoming traffic or vehicles ahead. It also enables Mercedes-Benz to exploit the legally permissible level of illumination in Europe virtually to the full.

Mercedes-Benz will soon be presenting Multibeam LED headlamps with a gridded light source containing 84 LEDs, enabling higher resolution of the light output. This will afford other road users better protection from dazzling, while improving illumination of the road ahead for the driver.

As a result of the freely configurable light distribution, it is possible to implement all high- and low-beam functions of the Intelligent Light System in entirely digital mode and without any mechanical actuators. This will make a wealth of new, adaptive light functions possible which will render night-time driving safer for both the driver and other road users.

This technology is set to advance at a rapid pace: in the medium term 1024 individually controllable pixels per LED chip will enable a further improvement in night-time visibility. The partners Infineon, Osram, Fraunhofer Gesellschaft IZM, Hella and Daimler have just achieved a breakthrough in the ‘μAFS’ research project in the form of a new type of LED chip with an extremely fine structure.

Monolithically structured pixel LED semiconductor layers are built up on a silicon substrate which, via the integration of circuit parts, allows the selective control of more than 1024 individually addressable pixels per LED chip. This LED technology is to be installed and tested in a Mercedes-Benz experimental vehicle in 2015 for the first time.

The roadmap is pretty clear for Mercedes-Benz lightning systems. The drivers seem to be the effectiveness and sharpness of the technology, while keeping contained product and maintenance costs. Do you think that filament and gas discharge headlamps will disappear and that LED will remain the only headlamp light source in the future of automotive industry? Or maybe only in mature markets?