The suspension design is crucial in the development of vehicle behavior to optimize vehicle performance, handling and comfort. There are a multitude of possible adjustments depending on the vehicle (comfort, sportiness, etc.). These settings play a important role in passengers safety in all phases of driving (braking, cornering, traction).

All quantities presented in this paper can be applied to most existing suspensions. Most of graphics are coming from the suspension design and analysis software: OptimumKinematics. 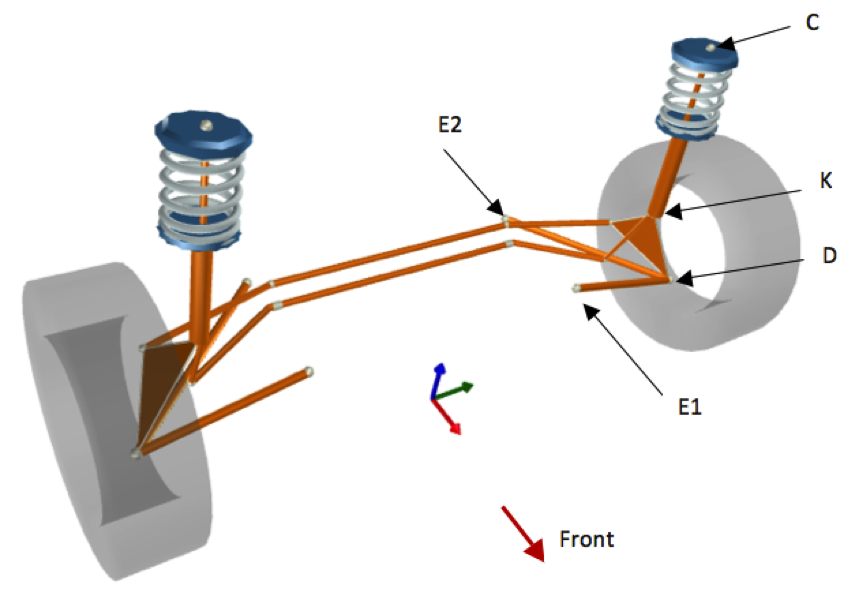 The convention used in this article is the SAE convention. However, other conventions are used by automotive manufacturers (ISO, ISO-W, …).

Wheelbase is the distance between the front and rear tire contact patch. A long wheelbase promotes stability in straight line whereas a short wheelbase allows a better corner entry. 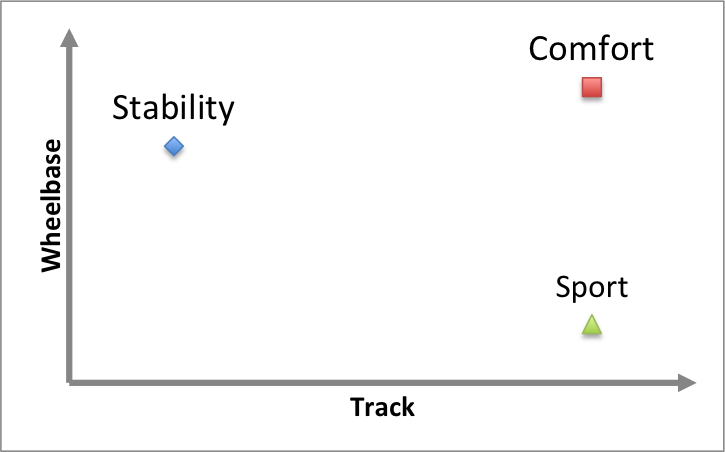 Toe is defined as the angular deflection from the vehicles centerline and the centerline of the rim. Positive toe (toe out) is defined as a wheel splaying out from the direction of travel. Toe Angle carries the same sign as Toe Distance. 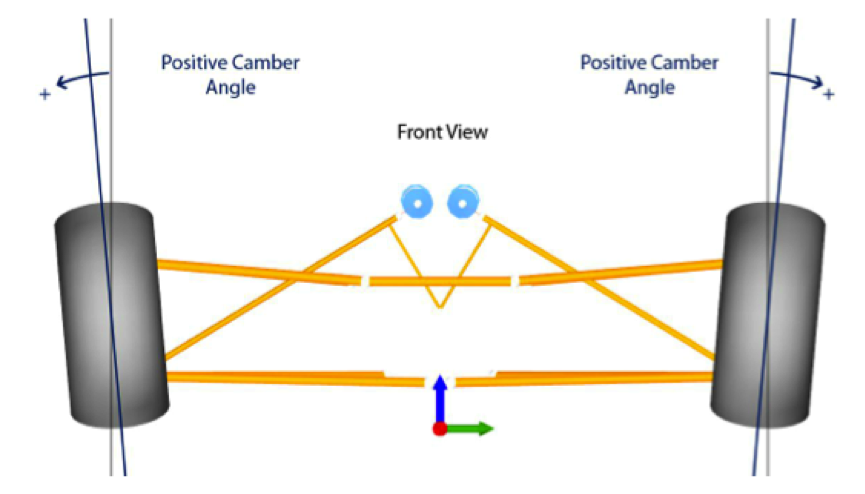 Camber plays an important role on lateral forces provided by the tire. Static camber angle can compensate camber gain on the outside wheel when the vehicle is rolling. The graph below shows the lateral force as a function of tire slip angle for different camber angles. 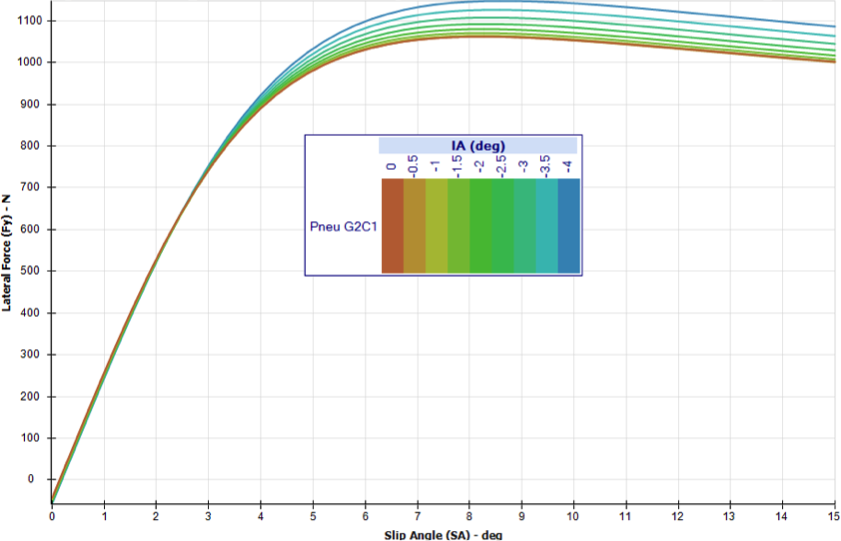 As it can be sees, the bigger the negative camber is, the greater the tire lateral force is, until a certain limit.

The camber variation is also important when designing the king pin angle and caster angle. In fact, these two values affect the camber gain when steering.Suspensions may have toe angle and camber angle in their static positions. These static angles play a very important role in the vehicle behavior and tire wear. Traditionally, automotive manufacturers adopt a negative toe angle (toe in) on the rear suspension to stabilize the rear of the vehicle and promote understeer, with a negative camber angle in order to decrease tire wear. On the front suspension, a positive toe angle allows better vehicle stability in braking and cornering (understeer behavior).

King pin angle is defined as the angle between the steering axis (CD axis in the figure at the beginning of this article) and an axis extending perpendicular from the contact patch, viewed front on (perpendicular to the vertical-lateral plane.)

Positive king pin angle is defined as the top of the steering axis being closer to the vehicle centerline.

Scrub Radius is defined as the distance between the intersection of the steering access and the ground measured to the center of the contact patch, viewed perpendicular to the vertical- lateral plane.

Positive scrub radius is defined as the steering axis intersecting the ground plane between the vehicle centerline and the contact patch. 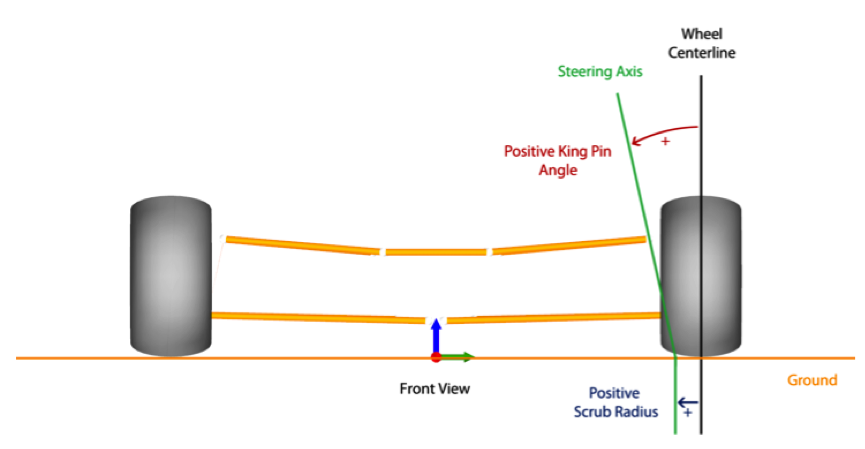 Influence on the vehicle behavior

Caster is defined as the angle between the steering axis and the wheel centerline extending perpendicular from the contact patch, viewed perpendicular to the side view (vertical longitudinal plane).

Positive caster is defined as the steering axis tilting back from the wheel centerline in side view (perpendicular to the longitudinal-vertical axis).

Mechanical Trail is defined as the distance between the intersection of the steering access and the ground measured to the center of the contact patch, viewed perpendicular to the vertical longitudinal plane.

Positive mechanical trail is defined as the steering axis intersecting the ground plane before the contact patch. 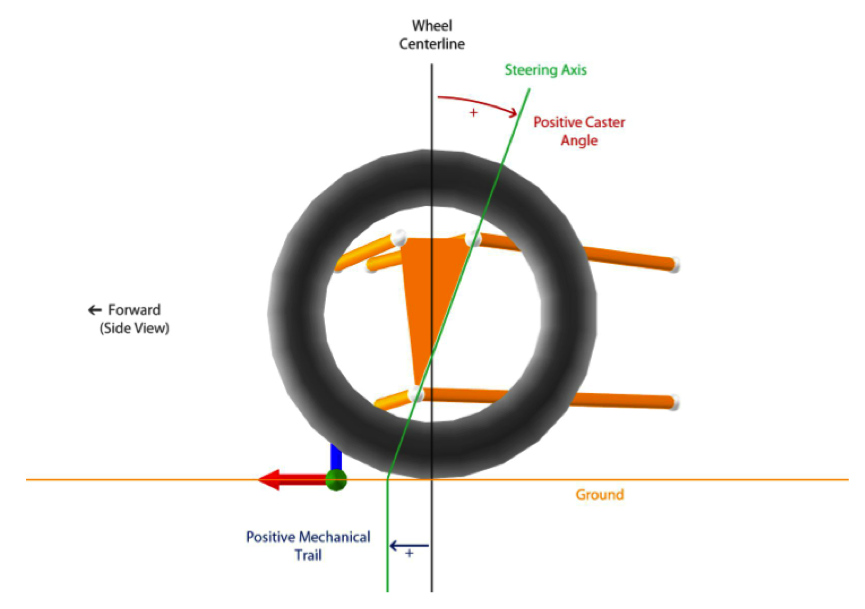 Influence on the behavior:

A positive caster angle produces a self-centering action of steering, and gives a steering feedback for the driver in straight line. This makes a vehicle easier to drive with a better steering response and directional stability. It also causes a camber gain (less negative camber) when steering on the outer wheel and thus improves vehicle behavior in cornering. Due to this caster angle, a power steering is usually used by manufacturers.

With a positive mechanical trail, the wheel is “pulled” by the vehicle as a wheel of a shopping trolley. Thus, it produces a self-righting effect in straight line which affects the vehicle’s straight-line stability.

This induces forces in the steering and makes the vehicle sensitive to lateral forces. A negative mechanical trail will increase the tendency to wander.

The king pin offset is defined as the distance between the center of the wheel and the crossing point of the king pin axis and the wheel spindle axis. 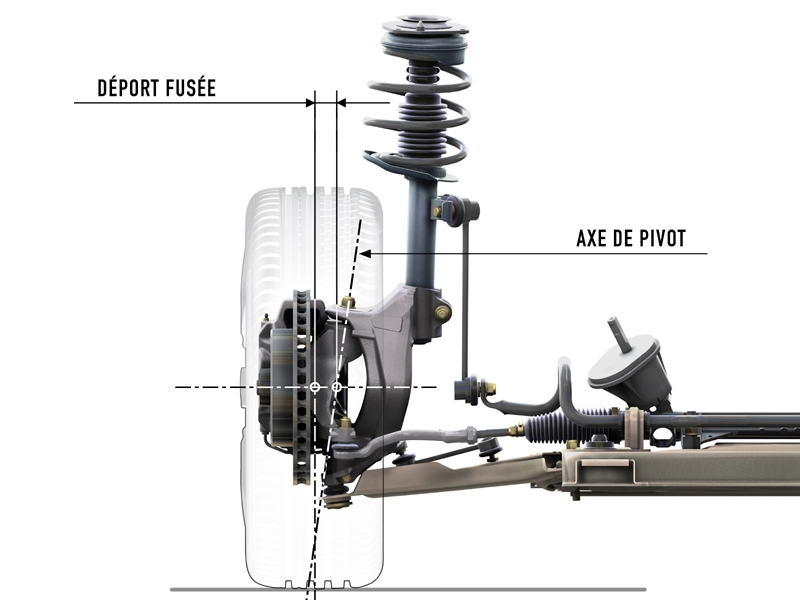 Influence on the behavior:

The kingpin offset is the “lever arm” of the longitudinal forces at the wheel center. It produces a self-centering action of steering, mainly sensitive at low speed. At high speed, it is usually minimal compared to other effects such as the caster angle effect.

There are several parameters that affect the behavior of the vehicle, providing a multitude of possible settings with as usual a lot of trade-offs. Manufacturers try to find the optimal suspension (double wishbones, Mac-pherson, multi-links…) and the right setting depending on the behavior they want to give to the vehicle (comfort, sport…).

16 thoughts on “Suspension design: definitions and effects on vehicle behavior”