The vehicle propulsion is usually obtained by means of engines, also known as prime movers, i.e. mechanical devices capable to convert the chemical energy of a fuel into mechanical energy. By the way, the English term “engine”, is likely to have a French origin in the Old French word “engin” which in turns is thought to come from the Latin “ingenium” (sharing the same root of “ingénieur” or “engineer”).

The chemical energy of the fuel is firstly converted into heat through combustion, and then the heat is converted into mechanical work by means of a working medium. This working medium can be a liquid or a gas. Indeed, the heat produced by combustion increases its pressure or its specific volume, and thanks to its expansion, mechanical work is obtained. 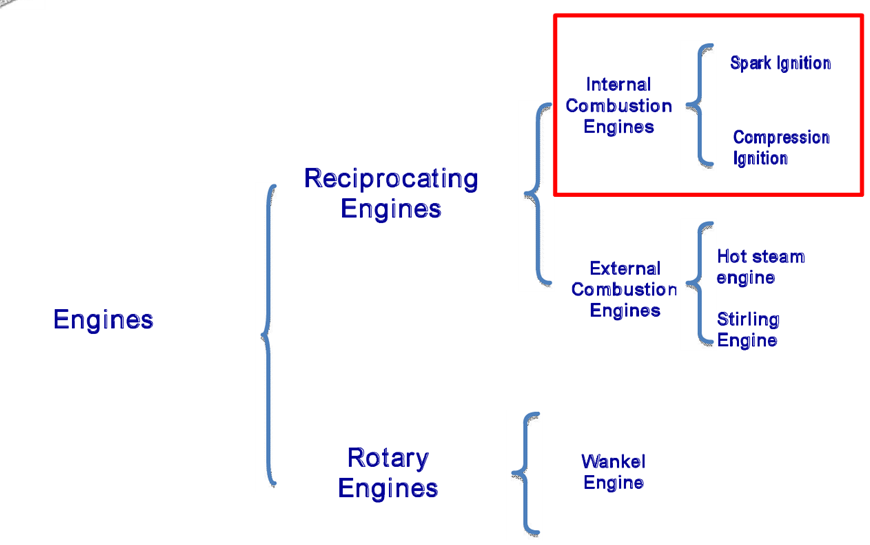 Reciprocating internal combustion engines are usually selected for propulsion of ground vehicles with some exceptions (electric motors for tramways, trolley buses or electric cars), due to their favorable power density and their relatively low manufacturing and service costs (compared with gas turbines for example).

In reciprocating ICE, the movement of a piston into a cylinder, closed at the opposite end by the cylinder head, produces a cyclic variation of the cylinder volume. The piston is connected to a rod and a crank to the shaft, the steady rotation of which causes a cyclic piston motion between two extreme positions, the Top Dead Center (TDC, closest to the cylinder head) and the Bottom Dead Center (BDC, largest distance from the cylinder head). These two positions correspond respectively to the minimum cylinder volume (clearance volume, Vc) and to the maximum cylinder volume (total volume, Vt). The difference between max and min volume is called swept volume or cylinder displacement and named Vd. And finally, the ratio between max and min volume is called compression ratio (rc). 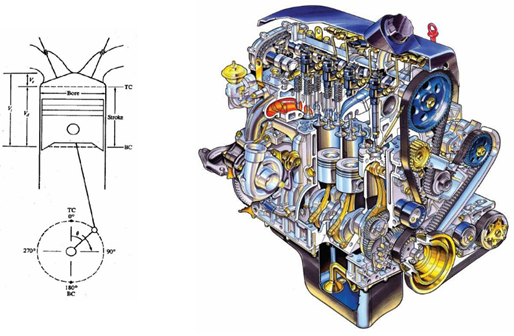 Combustion engines can be classified into different categories. The two most important are based on the combustion process (spark ignition vs. compression ignition) and on working cycle (2 strokes vs. 4 strokes). Additional classification can be based on air intake (Naturally aspirated or turbocharged), fuelling (indirect or direct injection), and cooling system (air cooled or water cooled). In this article, only differences between combustion processes will be presented. 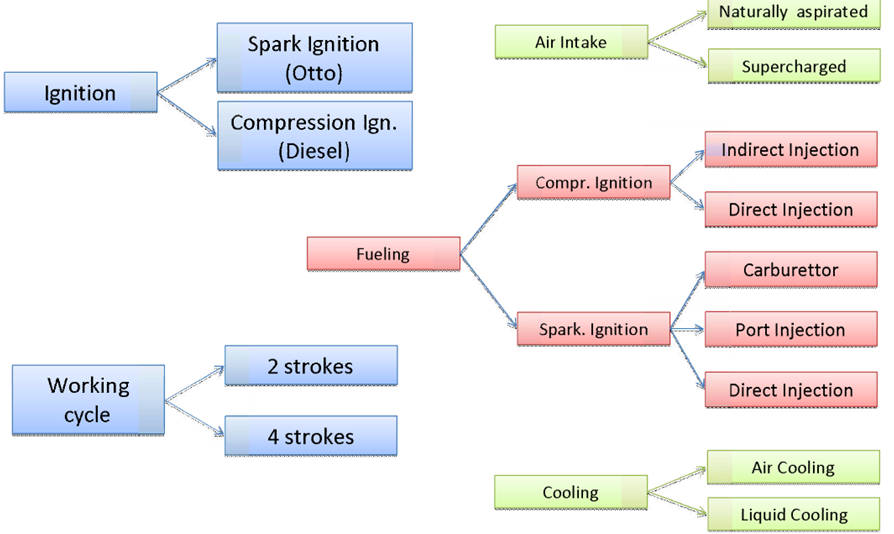 In spark ignition engines, fuels with relatively low reactivity are used such as gasoline, Compressed Natural Gas (CNG) or Liquefied Petroleum Gas (GPL). Such fuels are mixed with air to form the combustible, homogeneous air/fuel mixture, and then compressed into the engine to reach temperatures of about 700 K (400 °C) and pressures about 20 bar, without any spontaneous ignition.

This behavior can be explained on the basis of the fuel molecule characteristics: hydrocarbon fuels used in Spark ignition (SI) engines are made of short chain, rigid and compact structure molecules (such as CH4 for CNG or iso-octane C8H18 for gasoline) for which even at high temperatures and pressures, the time needed to start the combustion process is quite long. However, this concept must not be confused with the capability of a liquid fuel to evaporate at room temperature and form a combustible mixture in the ambient air. This capability is high with the gasoline and determines the hazard of explosion if a source of ignition is provided.

In SI engines, the combustion process can thus be started only (at least for a classic combustion) with an external source of energy such as an electric spark. The energy added to the mixture by the electrical discharge is small (around 10 mJ magnitude) but is anyway essential to start the combustion process.

From the first kernel ignited by the spark, the combustion then spreads through the mixture: layer after layer, the flame front travels through the chamber, mainly thanks to a convective heat exchange between burn gases and fresh mixture, until the last zones (called “end gas”) far from the spark are reached.

However, the air/fuel mixture, when maintained at high temperatures and pressures for a prolonged time, can eventually undergo auto-ignition. For this reason, abnormal combustions can occur when the end gas auto ignites spontaneously before the arrival of the flame front. This abnormal combustion causes a sudden rise of cylinder pressure followed by pressure waves inside the combustion chamber that are transmitted through the engine structure to the surrounding environment. This is called “Knock” and can cause damages to the piston and cylinder due to thermal fatigue stresses. To avoid the occurrence of knock, SI engine must comply with several limitation concerning the maximum flame path length (that limits the maximum cylinder diameter called bore to about 100 mm) and the maximum admissible temperature and pressure of the end (fresh) gas (that limit both the compression ratio and the boost pressure).

Moreover, high values of flame speed can be achieved only if the air/fuel ratio is quite close to the stoichiometric ratio:therefore , when an SI engine has to be operated at part load, it is impossible to reduce just fuel while maintaining unchanged the air mass into the cylinder. Then, the use of a device to reduce air mass flow is needed for load control (an intake throttle is often chosen) even if it is causing efficiency penalties at part load.

[colored_box variation=”moss green” title=”What is stoichiometry?”]Stoichiometry is defined as the point where, in the mixture, all oxygen is consumed and all fuel is burned. For gasoline, the ratio given by mass is 14.7:1 (14.7 grams of air for 1 gram of fuel). [/colored_box]

When fuels with higher reactivity are used, such as diesel, they cannot be mixed with air and then be compressed into the cylinder because otherwise the combustion process would start spontaneously during the compression stroke. Indeed, diesel fuel is a mix of hydrocarbons that can be represented by the cetane, C16H34, with a long straight chain molecule in which the preliminary reactions of the oxidation process proceed quite quickly at high temperatures and pressures.

Therefore, diesel fuel is injected as a high pressure liquid spray into the already compressed air, immediately before the desired start of combustion (in case of classic diesel combustion). The small fuel droplets (around 10 µm of diameter), surrounded by hot compressed air (around 900 K), quickly evaporate and the combustion process spontaneously starts with an extremely short ignition delay.

Differently from SI engines, the combustion process in diesel engine cannot self-adjust its characteristics to available time to perform combustion related to increase of engine speed (i.e. time requested for fuel evaporation, mixing and ignition delay will not scale down with increasing engine speed). Therefore, these engines cannot be operated at speeds higher than 5000 rpm.

Finally, differently from SI engines, there are no strict requirements in terms of air/fuel ratio for this kind of combustion. At part load, the injected fuel quantity is reduced while maintaining the same quantity of inducted air, without any need for throttling device and then without any added loss.

The two most common types of combustion (Spark ignition and compression ignition) are today known since a long time and well mastered. However, we are reaching the limits of those processes as the pollutants and fuel consumption limits set by standards are getting lower and lower. It becomes more and more costly to reach those standards, and some alternative combustion processes and engine architectures are being tested in laboratories and research centers. Do you think that Spark ignition and compression ignition engines as we know them nowadays will be replaced by some alternative solutions like CAI, PCCI, dual fuel combustion or other?