Honda Motor today gave the world a first look at an image of the power unit currently in development for the 2015 FIA Formula One (F1) World Championship. This article describes the Power Unit system that will be used.

Introduction: How can F1 machines, built for speed, be eco-friendly?

In 2014, the regulations for F1 engine and energy recovery systems were changed. The 2.4 liter engines were downsized to 1.6 liters, and environmental technologies such as energy recovery similar to conventional hybrid cars were introduced. 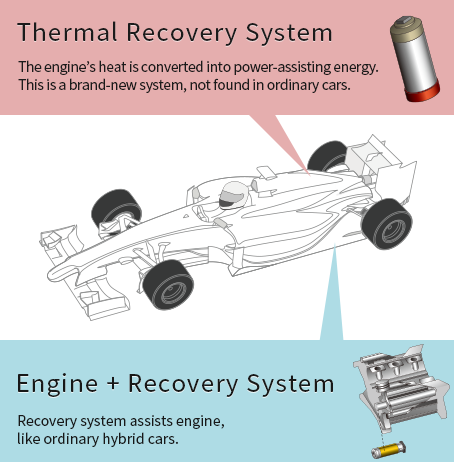 The change in terms from “engine” to “power unit” signifies a shift in thinking, from developing engines for pure horsepower to the pursuit of energy-efficient power units, leading to the highest level of energy-efficiency through environmental technologies. 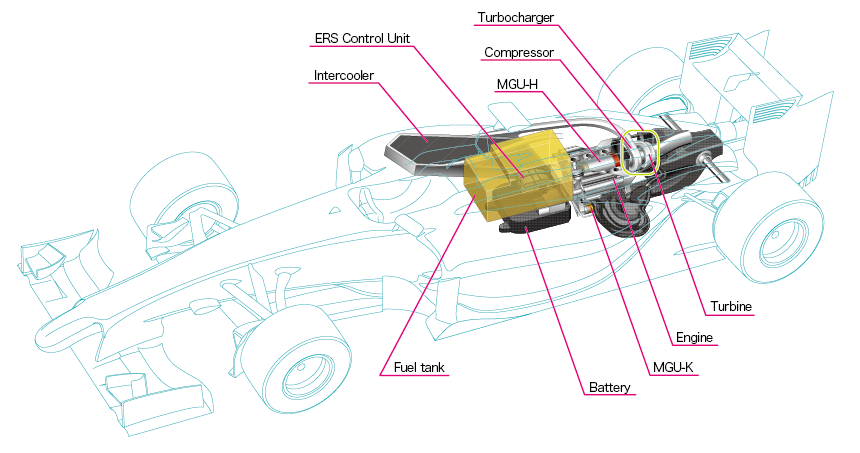 The kinetic energy recovery system is an evolution of on KERS (Kinetic Energy Recovery System), the system used in F1 racing from 2009 to 2013, and works similarly to the hybrid system for the Accord Hybrid and Fit Hybrid, by using a motor and electrical generator to convert kinetic energy into electrical energy.

With an engine-powered car, kinetic energy through braking is lost into as it becomes thermal energy through the brake units. In other words, energy is lost through braking. With a hybrid system, this lost energy is recovered by the motor/generator unit as electrical energy, and is stored in the battery, which can then be used to power the motor during acceleration. The kinetic energy recovery system’s motor/generator unit is called “MGU-K” (Motor Generator Unit – Kinetic).

Power units for F1 machines are located behind the driver’s seat (cockpit), where the batteries are also located. 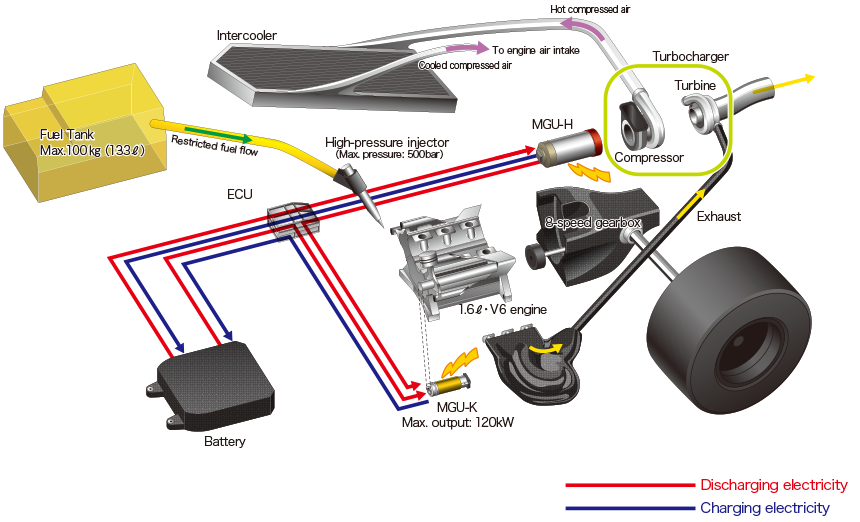 F1 machines need to use the limited fuel carefully to be able to finish a race. Races cannot be won by driving slow, so the thin trickle of fuel needs to be efficiently converted into power. To win in F1 racing, the engine needs to be fuel efficient and powerful, and the two energy recovery systems need to be utilized wisely.

Every drop of gasoline must produce maximum power, and the machines must have absolute speed that is expected of an F1 Racing. These technologies from developing F1 power units will be valuable for production cars of the future.

Energy storage devices (batteries) are used to store energy that would otherwise be lost. Regulations limit battery size to between 20 and 25 kg, to avoid excessive development costs. Battery development and control technologies gained through F1 development will also be beneficial to production hybrid cars in the future.

The ERS (Energy Recovery System) control unit is a computer that controls how energy in the power unit is used. It is the brains of the power unit, and its software determines how well the engine and two MGUs perform under constantly and rapidly changing environment and driving conditions.

The battery operates using direct current (DC), as opposed to the MGU-K and MGU-H which operate using alternating current (AC). The ERS control unit includes AC/DC and DC/AC converters to convert electricity between the battery and MGU-K / MGU-H. Technologies developed for conversion efficiency and heat management will most probably find their way to production hybrid cars.

The MGU-K converts deceleration kinetic energy into electrical energy, functioning similarly to motor/generator units in conventional hybrid cars. Maximum revs are limited to 50,000 rpm, and output to 120 kW. When powering the F1 machine by using electrical energy stored in the battery, the MGU-K adds 157 hp to the engine’s 592 hp. The MGU-K alone produces more power than the Fit Hybrid’s combined engine and motor output of 103 kW.

The MGU-H converts heat energy from exhaust gases into electrical energy, and is yet to be used in conventional hybrid cars. MGU-H technologies developed in F1 racing may find their way to production cars in the future.

The 2013 2.4-liter normally-aspirated V8 engine was replaced under the new 2014 regulations with a 1.6-liter V6 turbo engine with direct fuel injection. The engine is one-third smaller, and there are two-less cylinders, following the global trend of downsizing.

With a smaller capacity and less cylinders, the engine alone cannot be as powerful as before. Forced induction devices, such as turbochargers, allow the engine to be more compact, and produce the same power as before. The aim of engine downsizing is to reduce the size of the engine and increase fuel efficiency while producing the same power as a larger, normally-aspirated engine. Turbocharged engines can be built smaller, with higher fuel efficiency.

Output increases proportionately with the amount of fuel burned, so higher revs burn more fuel, and increase output, in a shorter time. By capping the maximum fuel flow at 10,500 rpm, only the same amount of fuel flow is available at higher revs, increasing mechanical resistance, and decreasing the merits of revving higher.

F1 engines of the past were designed to maintain higher revs to create higher output, but the new restrictions shift the focus to designing engines that use energy more efficiently.

The turbocharger, a device to efficiently utilize the engine’s exhaust energy, comprises of a turbine and compressor supported by bearings on the same axis. Exhaust gas energy turns the turbine powering the compressor, which in turn compresses and increases air fed into the engine’s combustion chamber, thus allowing for more combustion and higher output. Conventional turbocharged V6 engines are generally equipped with two turbochargers, but F1 regulations limit the engine to one turbocharger, requiring power to be found by other means.

How does energy flow within the power unit? Depending on what the F1 machine is doing on the track, energy is recovered, or is used to assist the engine.

The energy flow is similar to a conventional hybrid car: The MGU-K recovers (or generates electricity from) part of the kinetic energy lost when the F1 machine is braking, and stores the electricity in the battery. The MGU-K’s maximum output is 120 kW and the amount of energy allowed to be stored is 2 MJ per lap, so the F1 machine needs to brake for around 16.7 seconds per lap to reach this maximum charge. 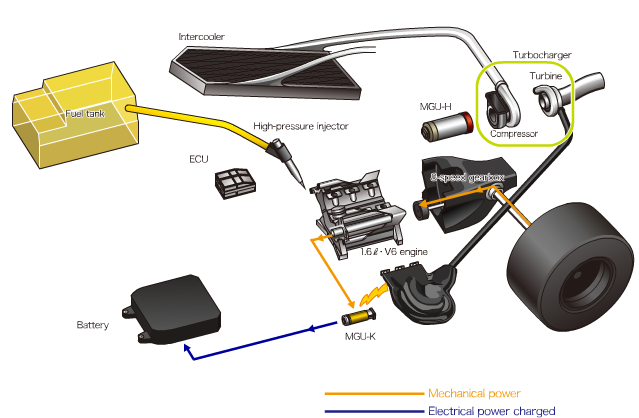 Acceleration out of corners (using MGU-K)

The F1 machine can accelerate faster out of corners by adding the output of the MGU-K to the engine’s output. 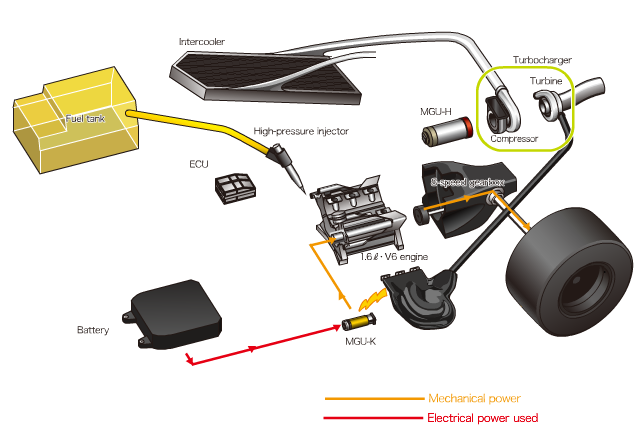 When turbocharged cars decelerate, the flow rate of exhaust gas decreases which delays the turbine to perform and hence the acceleration requires additional time. This small time-lag is called “Turbo Lag”. The MGU-H solves this problem by using a motor to power the compressor, without needing the turbine to wait for the exhaust gas. 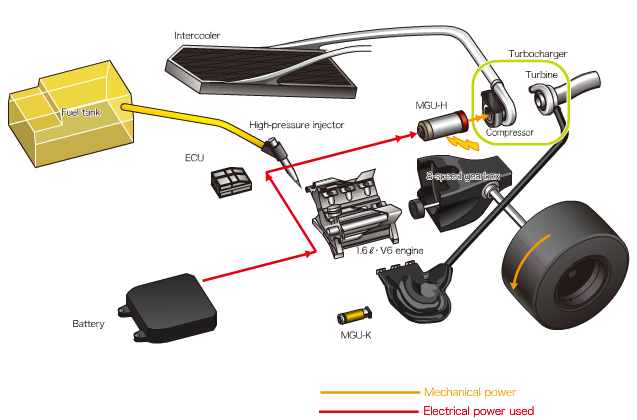 The turbocharger uses its compressor to send compressed air into the engine. Under full-accceleration, the exhaust energy fed to the turbine can increase to a point where it exceeds the amount of air the compressor can handle to feed the engine. 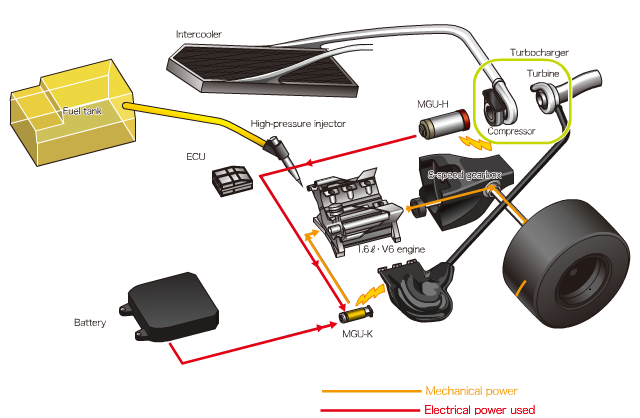 The MGU-H converts the excess exhaust energy into electricity, which it then sends to the MGU-K. There are no rules on how much electricity the MGU-H is allowed to generate, so the MGU-K’s output can be added to the engine’s output without worrying about the rules on the amount of electricity that the battery can charge or discharge. Unused exhaust energy can be efficiently used to accelerate faster.

Under full acceleration out of corners, the battery can also send electricity to the MGU-K. This way, full-acceleration can be achieved at the maximum output allowed for the MGU-K, at 120 kW.