The world’s first plug-in hybrid SUV, the Outlander PHEV represents a fusion of the EV technologies developed by MMC for models such as the i-MiEV, 4WD technologies honed in the Lancer Evolution, and SUV know-how gained from the Pajero (Montero or Shogun in some countries). The result is a groundbreaking new model that brings together the superior environmental performance and quietness of an EV, the stability and handling of a 4WD, and the practicality of a SUV, so that the driver can enjoy the benefits of:

Main Features of the Outlander PHEV

The unique combination of electric motors and gasoline engine gives flexibility in optimizing fuel efficiency and environmental performance while providing a long cruising range. For example, on electric power only, the vehicle has a cruising range of 60.2 km (measured via Japan’s JC08 mode), enabling it to function entirely as an EV in most everyday situations. It also has a total cruising range on a par with internal combustion engine (ICE) vehicles (897 km at JC08 mode), making it perfectly suited for uses traditionally associated with SUVs, such as long-distance travel and outdoor and leisure activities.

The optimum drive mode for comfortable and fuel-efficient driving is automatically selected depending on driving conditions and remaining battery charge. Gasoline consumption is minimized by actively utilizing electric power, keeping the gasoline engine in its most efficient range, and by recovering energy during deceleration via regenerative braking. This results in a plug-in hybrid fuel efficiency (combined fuel efficiency) of 67.0 km/l (1.5 l/100km) and hybrid fuel efficiency of 18.6 km/l (5.4 l/100km), both on JC08 mode.

The pairing of the all-new Twin Motor 4WD with MMC’s S-AWC (Super All Wheel Control) integrated vehicle dynamics control system delivers greater stability, ensuring the vehicle behaves just as the driver intends and assisting safe, comfortable driving under a range of road conditions. As an inherent characteristic of electric motors, they generate high torque instantly; giving acceleration comparable to that of a vehicle powered by a large displacement high-output ICE and allowing Outlander PHEV to deliver superior levels of environmental and driving performance.

The 100V AC power supply can produce up to 1,500W of 100 V alternating current from dual interior outlets to power all kinds of appliances for outdoor leisure use and in emergencies. These can provide roughly one day’s worth of power for ordinary home appliances and up to around 10 days’ worth when power generation by the engine is factored in.

The battery can be switched to Battery Charge Mode, which allows electricity to be generated by the engine and stored when stationary or on the move (giving 80% charge in approximately 40 minutes when stationary) and Battery Save Mode, which maintains charge while driving. Stored electricity can be used in EV Drive Mode at the destination or used to power appliances.

The Plug-in Hybrid EV System was developed based on the EV technologies used in the i-MiEV and MINICAB-MiEV for use in mid-size and larger passenger cars that require longer cruising ranges. Key components such as the battery and motor are constantly monitored, and integrated control is maintained over the engine, Twin Motor 4WD, regenerative brakes, air conditioning, and so on to ensure safe, comfortable, and fuel efficient driving. 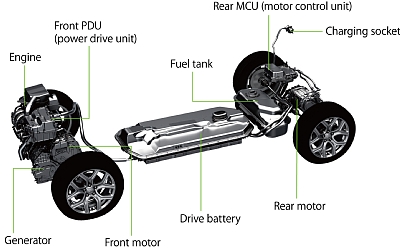 The drive battery is a high-capacity lithium-ion battery developed for the PHEV System based on the technology used in the i-MiEV and MINICAB-MiEV (16.0 kWh models). It consists of 80 cells mounted in series housed in a battery pack enclosed in a secure frame, and has a total voltage of 300V and total storage capacity of 12.0 kWh.

Smaller, lighter, higher output versions of the permanent magnet synchronous motors used in the i-MiEV and MINICAB-MiEV are located front and rear. These have a maximum output of 60 kW each and maximum torques of 137 Nm (front) and 195 Nm (rear).

The 4B11 2.0-liter inline-four gasoline engine functions solely to generate electricity in Series Hybrid Mode and is mainly used to provide motive power in Parallel Hybrid Mode. It is fitted with MMC’s MIVEC technology, which keeps the engine in optimal efficiency ranges by continuously varying the timing of the air intake valves according to engine speed in Parallel Hybrid Mode. Additionally, exhaust noise has been reduced and the engine room soundproofing increased in order to ensure the vehicle remains as quiet as EV Drive Mode, even when the engine is in use.

In Series/Parallel Hybrid Mode and in Battery Charge/Save Mode, the generator generates electricity through motive power from the engine to store into the drive battery.

Leveraging its proven expertise in 4WD control technology, MMC has developed a new Twin Motor 4WD system that delivers power independently to the front wheels (from the front motor and/or engine) and rear wheels (from the rear motor). The use of motors and absence of mechanical connections such as a propeller shaft mean the Twin Motor 4WD delivers better response and finer control than conventional 4WD systems and reduces friction loss through the removal of coupling device.Twin Motor 4WD is coupled with MMC’s S-AWC (Super All Wheel Control) integrated vehicle dynamics control system, which combines front- and rear-wheel drive control and left and right wheel brake control to provide consistent handling and stability on the road. Two modes are offered, selectable with a switch: Normal Mode for ordinary conditions and Lock Mode for enhanced all-terrain performance.

During deceleration, the motors function as generators so that electricity can be generated to charge the drive battery. The strength of regenerative braking is adjustable using the selector lever, which has three strength settings, and a paddle selector on the steering wheel, which offers six strength settings. The regeneration level can be selected as the driver likes according to road conditions, such as when approaching a bend or descending a mountain road, or when seeking a sportier ride, allowing the driver to get just the right amount of desired brake force from the system.

Technical specifications of the Outlander PHEV