In 2014 Formula 1 will enter a new era. After three years of planning and development, the most significant technical change to hit the sport in more than two decades is introduced. Engine regulations form the major part of the coming revolution, with the introduction of a new generation of Power Units that combine a 1.6 liter V6 turbocharged engine with energy recovery systems that will increase efficiency by harvesting energy dissipated as heat in the exhaust or brakes.

The maximum power of the new Power Unit will exceed the output of current V8 F1 engines however fuel efficiency will be improved. With only 100kg permitted for the race, the new units will use 35% less fuel than their predecessors. 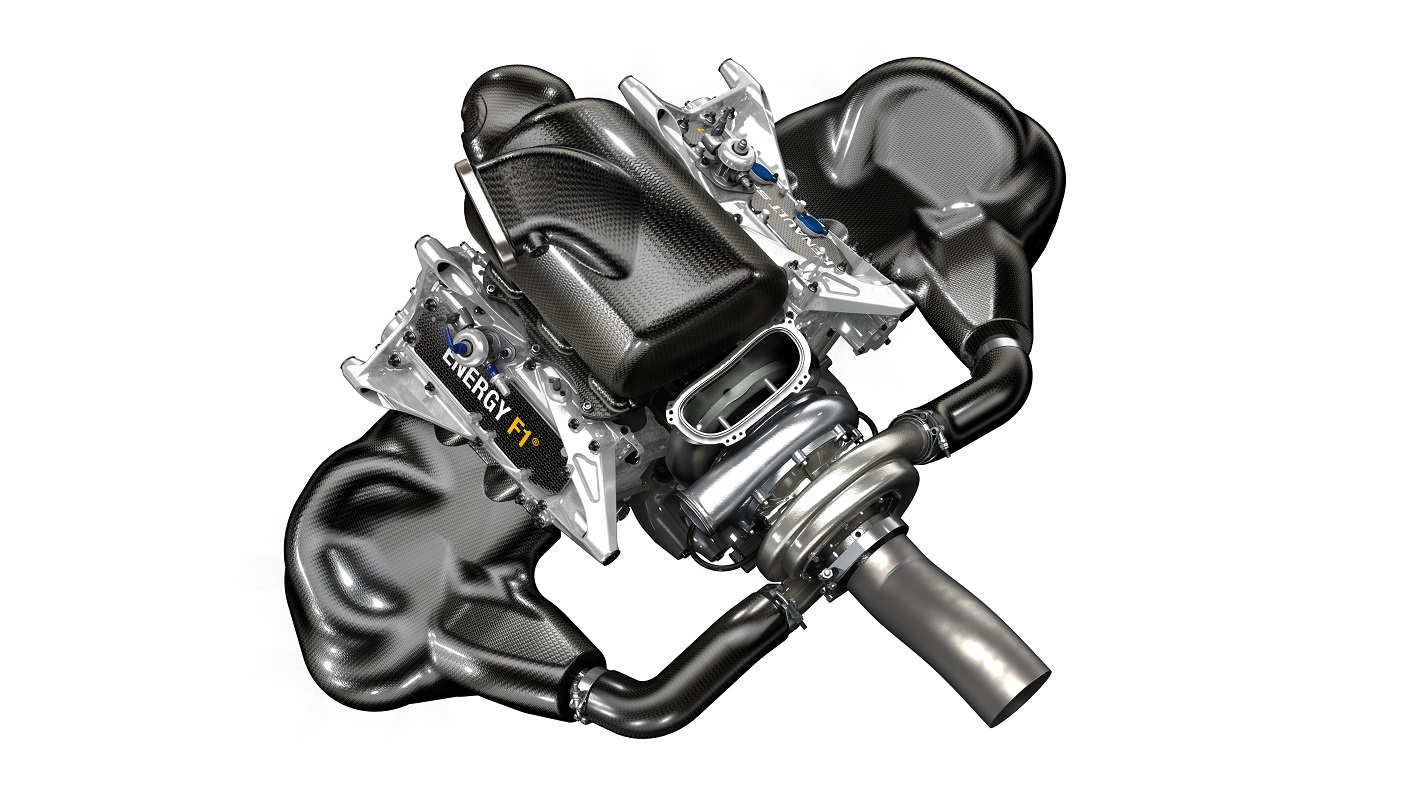 “From 2014 we will bring engines to the fore and redress the balance in F1. An engine is the heart of a car, from next year it returns to the heart of our sport.” Said Alain Prost, Renault ambassador and four-times Formula 1 World Champion.

“From next year, one of greatest challenges in F1 will be to maximize energy efficiency and fuel economy while maintaining the power output and performance expected of F1 cars. Renault has pioneered this technology in its road car engine range with the Energy series. Naming the Power Unit Energy F1 creates an unbroken range, from the Clio through to our competition department.” Added Jean-Michel Jalinier, President of Renault Sport F1.

The Renault Energy F1 V6 has a displacement of 1.6 liters and will make around 600 bhp, or more than 3 times the power of a Clio RS.

A wastegate is used in association with the turbocharger to control the system. It is a control device that allows excess exhaust gas to by-pass the turbine, to match the power produced by the turbine to that needed by the compressor to supply the air required by the engine.

With direct fuel injection (DI), fuel is sprayed directly into the combustion chamber rather than into the inlet tract upstream of the inlet valves. The fuel-air mixture is formed within the cylinder, so great precision is required in metering and directing the fuel from the injector nozzle.

The MGU-K is connected to the crankshaft of the internal combustion engine and is capable of recovering or providing power (limited to 120 kW or 160 bhp by the rules). Under braking, the MGU-K operates as a generator to slow the car (reducing the heat dissipated in the brakes) and so recovers some of the kinetic energy and converts it into electricity. Under acceleration, the MGU-K is powered (from the Energy Store and/or from the MGU-H) and acts as a motor to propel the car.

The MGU-H is connected to the turbocharger. Acting as a generator, it absorbs power from the turbine shaft to recover heat energy from the exhaust gases. The electrical energy can be either directed to the MGU-K or to the battery for storage for later use. The MGU-H is also used to control the speed of the turbocharger to match the air requirement of the engine (e.g. to slow it down in place of the wastegate or to accelerate it to compensate for turbo-lag.)

The Power Unit’s ERS (Energy Recovery System) uses the MGU-H and MGU-K plus an Energy Store, plus some power and control electronics. Heat and Kinetic Energy recovered can be consumed immediately if required by the other MGU, or used to charge the Energy Store. The stored energy can be used to propel the car by the MGU-K or to accelerate the turbocharger by the MGU-H. Compared to 2013 KERS, the ERS of the 2014 Power Unit will have twice the power (120 kW vs 60 kW) and a performance effect 10 times greater. 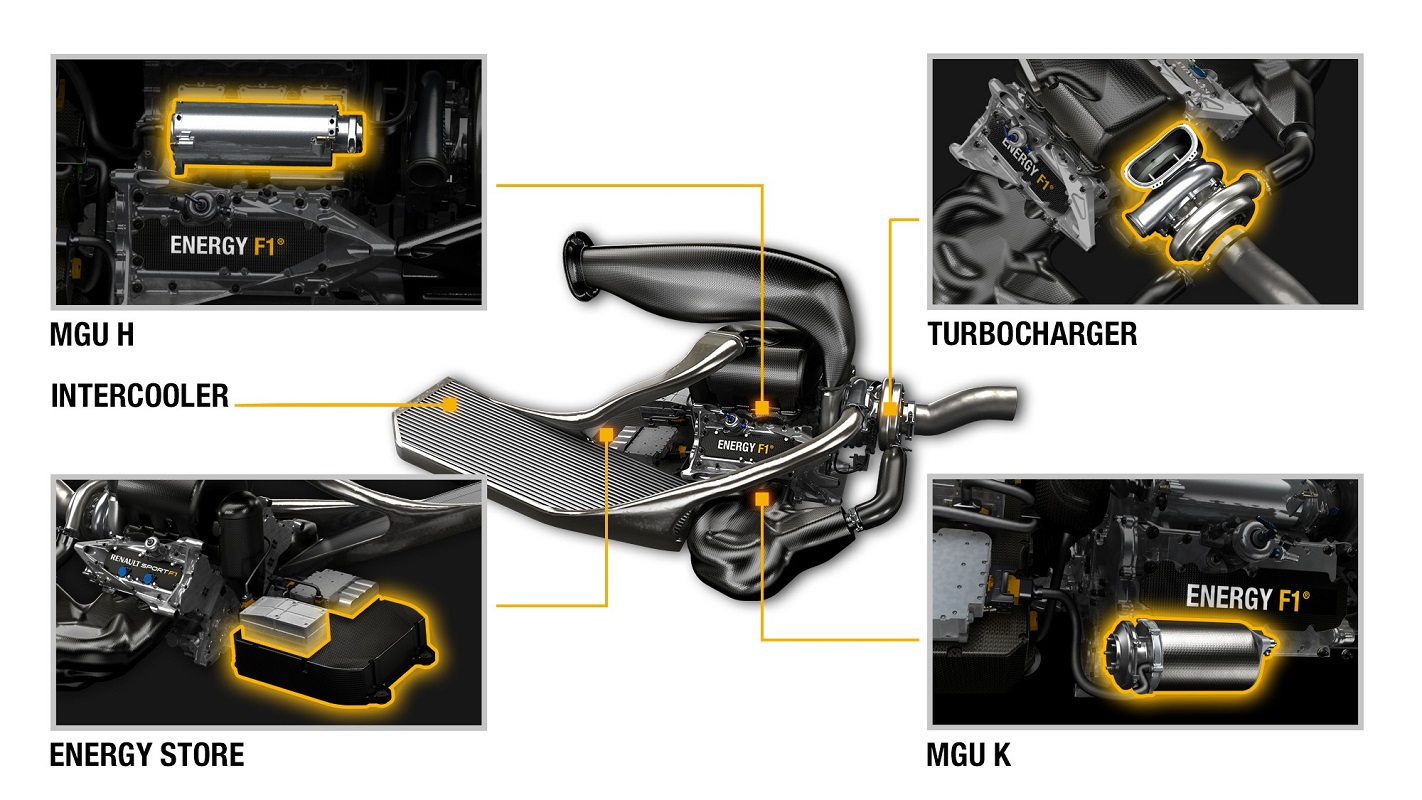 ‘‘There are two sources of energy to propel the car; fuel in the tank and electrical energy in the energy store, or battery. The use of the two types of energy needs an intelligent management, since the permissible fuel consumption in the race is limited to 100kg and the battery needs recharging to avoid it going flat,’’ technical director for new generation Power Units, Naoki Tokunaga, explains.

‘‘For 2014, the fuel flow is limited to 100 kg/h, and the fuel quantity for the race to 100 kg. So if the car uses fuel at the maximum permitted rate of 100 kg/h, it can do so for only 1 hour. The car performance is intended to be similar to 2013, so in fact the races will last more like 1 hr and 30 min. Of course, the circuit and car characteristics will not allow the cars to run at maximum power all around the lap. On all circuits, it is predicted that the natural fuel consumption for the race distance will be close to the allowed 100 kg, in some case just under, in some cases just over. If just over, then it will be necessary to decide how to use the available fuel.

‘‘The F1 cars for 2014 may be categorized as a hybrid electric vehicle (HEV), which combines a conventional internal combustion engine with an electric propulsion system, rather than a full electric vehicle (EV). Like road-going HEVs, the battery in the F1 cars is relatively small sized. The relevant technical regulations mean that if the battery discharged the maximum permitted energy around the lap, the battery would go flat just after a couple of laps. In order to maintain “state of charge” (SOC) of the battery, electrical energy management will be just as important as fuel management. 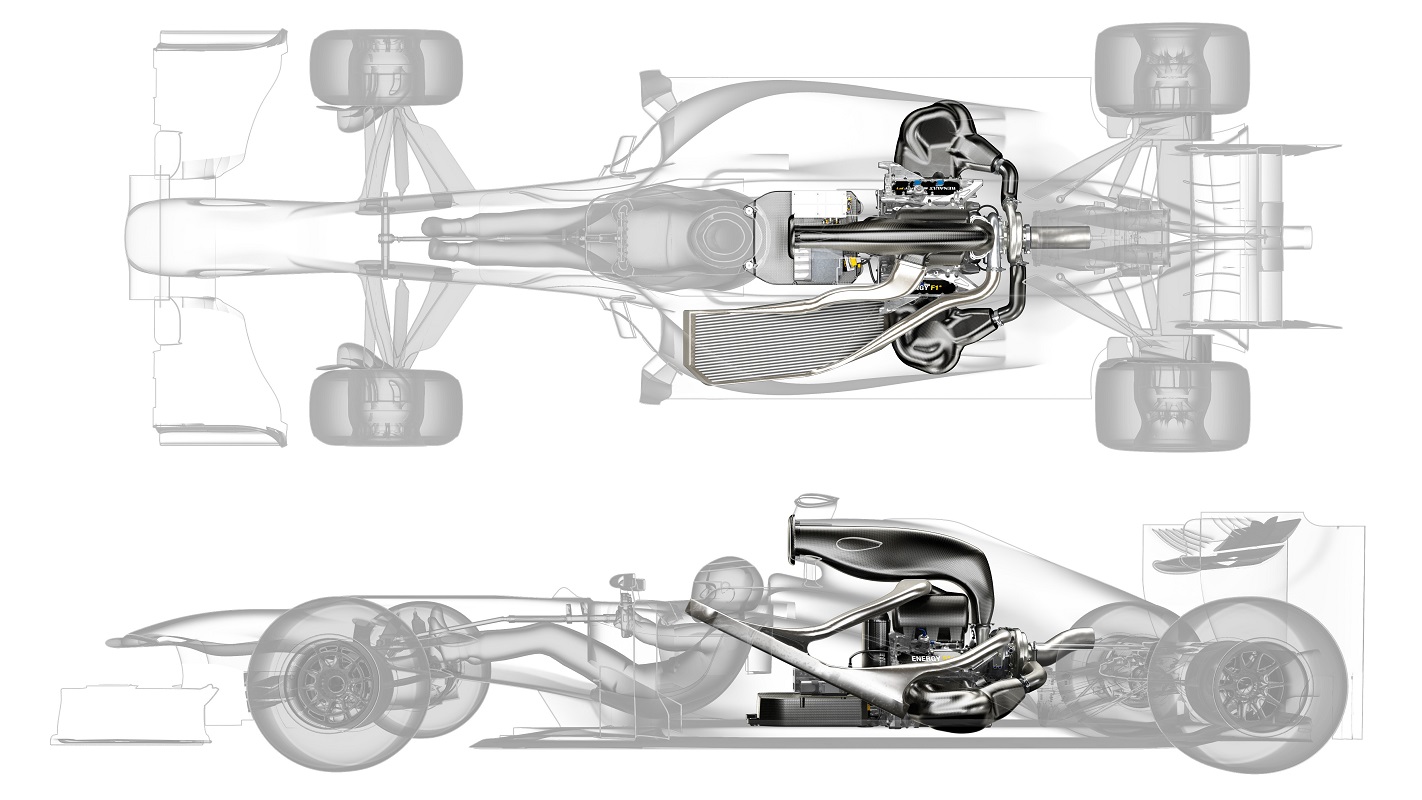 ‘‘The overall objective is to minimize the time going round a lap of the circuit for a given energy budget. This might sound nothing like road-relevant, but essentially, this is the same problem as the road cars: minimizing fuel consumption for a given travel in a given time – the input and output are just the other way around.

‘‘The question then becomes where to deploy the energy in the lap. This season, KERS is used only a few places in a lap. But from 2014 all of the energy, from fuel and battery, is so precious that we will have to identify where deployment of the energy will be beneficial over the whole lap and saving will be least harmful for lap time – we call it “power scheduling”. This will be decided jointly between the chassis teams’ vehicle dynamics departments and Renault Sport F1 in Viry-Châtillon.

‘‘Choosing the best split between the fuel-injected engine and electric motor to get the power out of the Power Unit will come down to where operation of these components is most efficient. But again, SOC management presents a constraint to the usage of the electric propulsion. And the optimum solution will vary vastly from circuit to circuit, dependent on factors including percentage of wide open throttle, cornering speeds and aerodynamic configuration of the car. 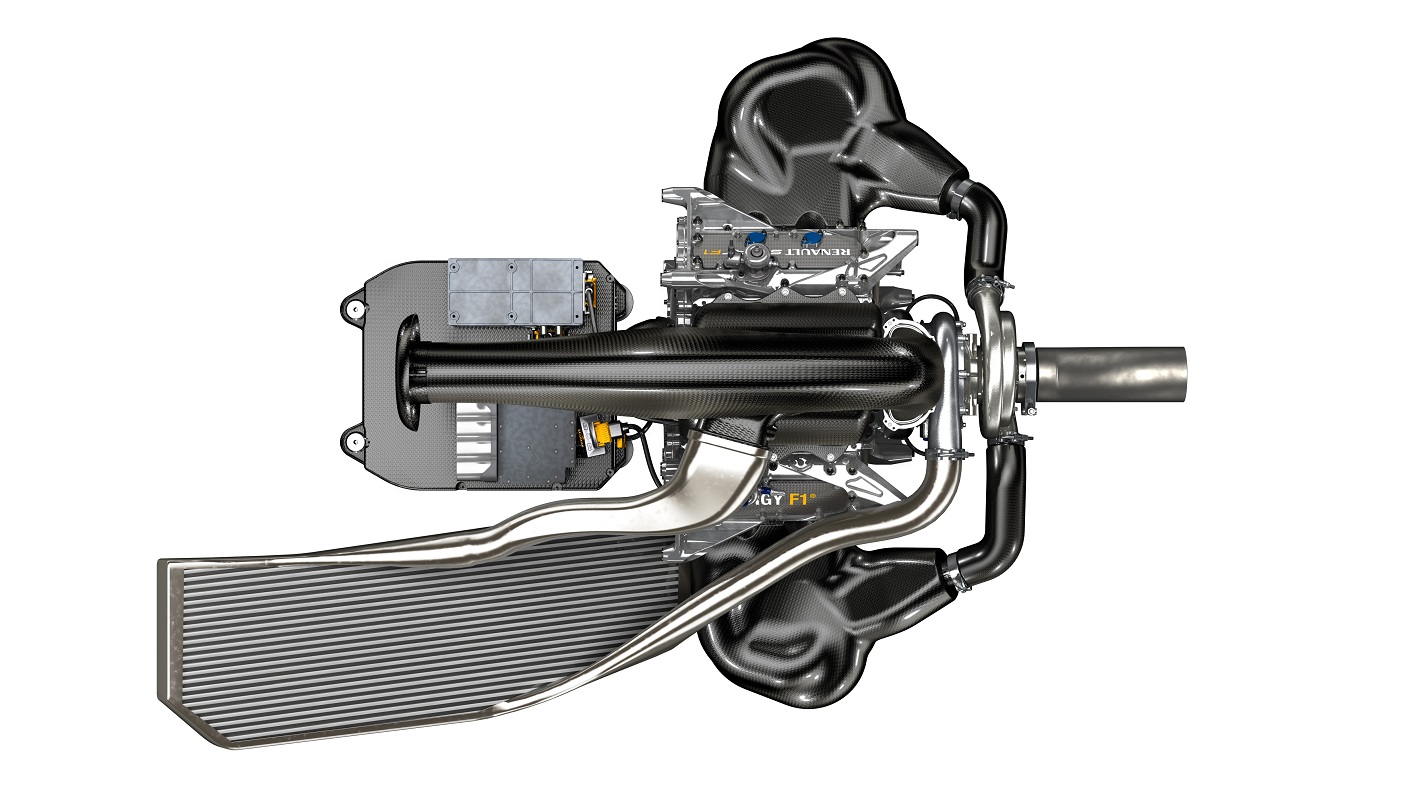 I think there is an interesting work to do from the energy management point of view. By definition, in formula 1, the driving cycle is known in advance which means that a predictive strategy is defined to optimize energy consumption. I guess that there is a nice engineering study to perform there. Do you think that, in 2014 season, we will see some “out of petrol” or “out of energy” cases during some races?