The XL1 from Volkswagen is the most fuel efficient production car in the world, with a fuel consumption value of 0.9 l/100 km on combined NEDC cycle.Thanks to its plug-in hybrid system, the two-seater can also cover a distance of up to 50 km in all-electric mode and therefore with zero local emissions.

Most aerodynamic car ever

The XL1 is an automotive that follows pure sports car design principles: low weight (795 kg), optimized aerodynamics (Cd 0.189) and a low center of gravity (1,153 mm high). This gives the Volkswagen the ability to cruise on the road at a constant speed of 100 km/h using just 6.2 kW / 8.4 hp. In all-electric mode, the XL1 requires less than 0.1 kWh to cover a driving distance of over one kilometer. 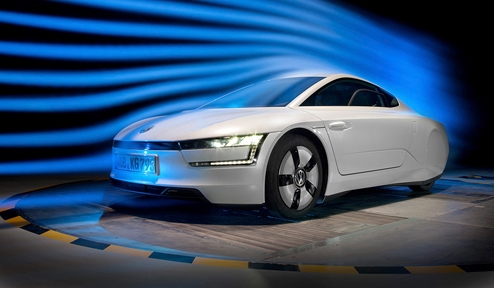 Third evolutionary stage of a vision

Conceptually, the XL1 represents the third evolutionary stage of Volkswagen’s 1-liter car strategy. When the new millennium was ushered in, Prof. Dr. Ferdinand Piëch, who is today Chairman of the Supervisory Board of Volkswagen AG, formulated the goal of bringing to market a production car that was practical in everyday use with fuel consumption of one liter per 100 km. In the twoseat XL1, this goal has been reached. Despite the efficiency of the XL1, developers successfully came up with a body concept, which delivers more everyday utility than in the two previous prototypes. While the driver and passenger sat in a tandem arrangement for optimal aerodynamics in the L1, the 1-liter car presented in 2002 and in 2009, in the XL1 two occupants sit slightly offset, side by side, nearly as in a conventional vehicle.

The running gear is characterized by lightweight construction with maximum safety. In front, a double wishbone suspension is used, while a semi-trailing link system is employed at the rear. The front and rear suspension are both very compact in construction. The running gear components mount directly to the CFRP (carbon fiber reinforced polymer) monocoque in key areas. Running gear weight is reduced by the use of aluminium parts (including suspension components, brake calipers, dampers, steering gear housing), CFRP (anti-roll bars), ceramics (brake discs), magnesium (wheels) and plastics (steering wheel body).

Friction-optimized wheel bearings and drive shafts, as well as optimized low rolling resistance tires from Michelin (front: 115/80 R 15; rear: 145/55 R 16), contribute to the low energy consumption of the new XL1. Safety gains are realized by an anti-lock braking system (ABS) and an electronic stabilization program (ESP). That is because sustainability without maximum safety would not really be a step forward.

Technical data of the XL1

Such a prototype is nice for improving green image of Volkswagen group. A step forward would be to bring this prototype to the market jointly with an realistic commercial offer. Do you think they will take the step and sell the XL1?