The ZF 9HP automatic transmission at a glance

In order to shape individual mobility efficiently, the drive systems of modern motor vehicles will be continuously developed. Before fully electric drives will take hold to a greater extent, automatic transmission systems play a central role in such contexts. The goal is to reduce the entire driveline’s energy consumption while raising driving performance and driving comfort. Thus, it must be possible to realize all developed concepts in a cost-effective way.

In general, it makes sense to use transmissions with higher transmission-ratio spreads and more gears with smaller gear steps. While there are already 7 and 8-gear transmissions with high transmission-ratio spreads on the market for longitudinally installed drivelines, this development has not yet occurred in case of vehicles with transverse-mounted front engine. This drive configuration is particularly used for compact and medium class applications, i.e. segments with small installation space requirements and high cost sensitivity on the customers’ side. At the global level, those vehicles continue to win market shares. Today, in 75 percent of passenger cars, the engine is installed in transverse to the direction of travel.

Due to reasons of cost efficiency and installation space optimization, ZF engineers did not use a fully-integrated mechatronics module for all sensors, actuators, and the electronic control unit (ECU) in the 9 HP. Instead, the ECU is installed separately from the now significantly smaller hydraulic control unit (HCU), namely on the upper side of the transmission housing. The sensors can be found inside the transmission, vehicle-side signals are connected directly to the male plug of the ECU.

In case of the 9HP, ZF develops and produces the complete ECU itself for the first time. A powerful embedded flash controller can realize complex control algorithms. Its calculation performance is comparable to the controller used in the 8-speed automatic transmission and can be increased by approx. 30 percent on demand. The layout of the ECU printed circuit board has been designed so that the different hardware requirements of the OEMs can be met without any problems. 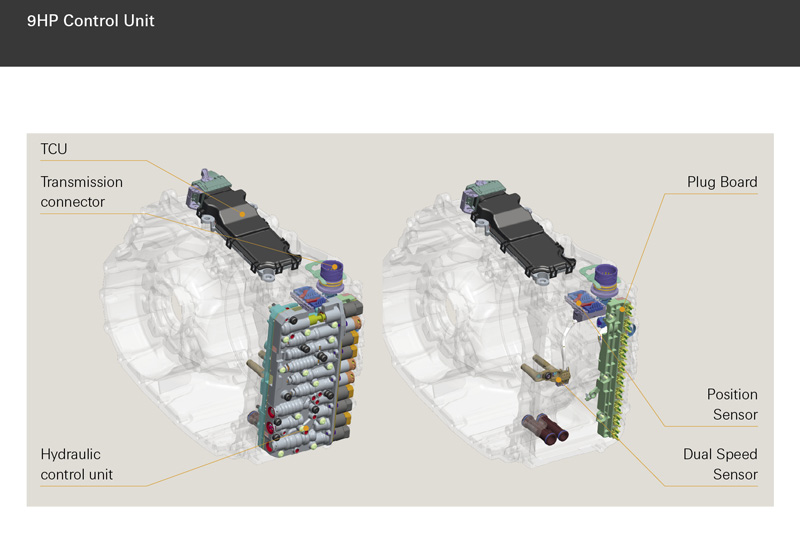 With two series, the 9HP covers the torque range from 200 to 480 kNm. Because of its modular system the basic transmission can be added on demand. Thus it is possible to implement different starting elements, hybrid- and all-wheel applications in front-transverse passenger cars, even in tight installation spaces.

An additional transfer case can be connected for the all-wheel drive operation. The engine performance is then distributed to front and rear axle at the transmission output. For an efficient implementation of such an all-wheel drive, ZF developed a system with decoupling function (ECOnnect). It actuates the rear-axle drive only when it is needed and thus, saves up to five percent fuel compared to the permanent all-wheel drive.

The 9-speed automatic transmission is also start-stop capable without hydraulic impulse oil storage (HIS). Since, in the case of restarting, it is only one friction shift element that needs to be closed, response times are indeed highly spontaneous. In addition, the 9HP can be hybridized: On the basis of parallel hybrid architecture, the torque converter is then replaced by an electric motor. Finally, thanks to its open software and interface structure as well as the electronic control unit, it will be possible to integrate the 9-speed automatic transmission flexibly in different vehicle concepts in terms of function and electronics.

With respect to installation space requirements – in particular transmission length – the size limit of front-transverse planetary gear sets with 6 speeds has been reached in the current state of technology: If the number of speeds of the transmission is increased to eight or nine for the benefit of a higher transmission-ratio spread, additional gear sets and shifting elements will be necessary. However, in the conventional design of torque-converter transmissions, these components can hardly be installed in the strongly limited installation space. In order to increase the sustainability of the reliable and established planetary gearset technology in connection with a higher number of speeds as well as a torque converter as starting element in the front-wheel drive range, it was necessary to find new ways to arrange the assemblies.

ZF’s engineers put two planetary gearsets on top of each other, so that there are never more than three gearsets in a row. This approach is simpler to carry out in front-wheel drive transmissions than in case of longitudinally installed transmissions because they are larger in diameter. It proved to be a space-saving concept idea to use hydraulically operated constant-mesh elements, since these can be integrated without a major impact on the overall transmission length and still enable high efficiency. While opened multidisk shift elements create drag torques, these losses play hardly any role in case of dog clutches. This aspect is particularly important with regard to multi-speed concepts: The enhanced efficiency generated by small transmission steps must not be reduced again by drag losses due to the rather complex design.

Overall, the realized transmission system consists of four simple gearsets and six shift elements, and in addition to this, the two dog clutches each use two multidisk clutches and two multidisk brakes. The total spread is 9.81 which significantly reduces the engine speed and thus also fuel consumption. The transmission has a harmonic step range like ZF’s 8-speed automatic transmission (8HP) – the wheelset efficiencies of the planetary gearset rise above 97% in all gears.

A torque converter is used as starting element for the 9HP because the customers, particularly in the USA and the Asian markets, esteem its high maneuvering quality. In order to minimize hydraulic losses, different damping systems are used so that the torque converter lock-up clutch can already be closed at low speeds. Various damping characteristics can be realized in order to ensure an optimal adjustment to the respective engine.

The housing consists of two essential parts: a converter housing and a main housing with an aluminum cover. By default, the 9HP is connected to the vehicle radiator via pipes, and a transmission cooler can optionally be attached directly to the housing.

We have here a great challenger to DCT transmissions and CVT. Indeed, automatic transmissions with high spread were only suitable in longitudinal position so far, letting transversal transmission market to CVTs and DCTs. This 9HP will, according to me, target B and C-segment where transversal engines are the most installed, and countries where the acceptence for automatic transmissions is high, like Asia, USA and northern Europe (See here some statistics). Do you think it will take some market shares to DCT which is in fast growing situation? Do you think ZF 9HP is more efficient than a DCT or a CVT?