Honeywell announced that SAE International, the world’s leading automotive engineering association, has concluded that Honeywell’s new low-global-warming-potential mobile air conditioning refrigerant, HFO-1234yf, is safe for use in automobiles after completing an expanded and extensive evaluation.

The SAE International Cooperative Research Project (CRP) also said that all 11 global automakers who participated in the project “have indicated agreement with these conclusions” and called testing conducted by Daimler late last year that raised questions about the refrigerant’s flammability “unrealistic.”

“After extensive testing and analysis, the new CRP concluded that the refrigerant release testing completed by Daimler was unrealistic,” the SAE CRP said in its final summary. “Their testing created extreme conditions that favored ignition while ignoring many mitigating factors that would be present in an actual real-world collision.”

“The conclusions from SAE’s latest expanded evaluation, combined with years of extensive testing in the U.S., Europe and elsewhere, again leaves no doubt that HFO-1234yf is safe for automotive applications,” said Ken Gayer, vice president and general manager for Honeywell Fluorine Products. “The fact that all 11 global automakers participating in the project agreed with the SAE CRP’s conclusions is further proof that this product can be used safely.” 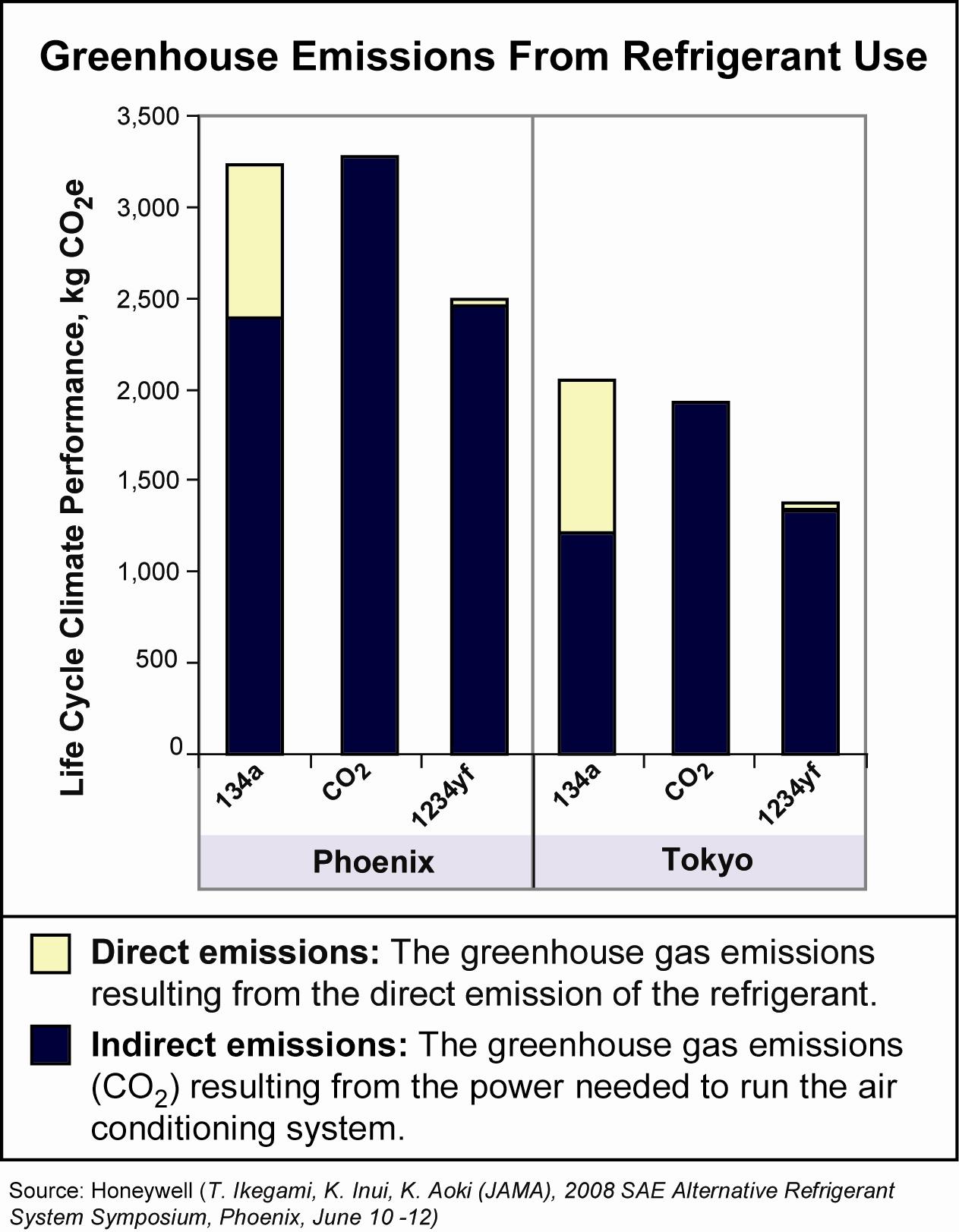 The latest CRP included European, North American, and Asian automakers, including Chrysler/Fiat, Ford, General Motors, Honda, Hyundai, Jaguar Land Rover, Mazda, PSA, Renault and Toyota. HFO-1234yf, as a replacement for HFC-134a, is already in use by the auto industry. It is being adopted by automakers in part to meet the European Union’s Mobile Air Conditioning (MAC) Directive, which aims to reduce the greenhouse gas emissions of air-conditioning systems in passenger cars and light commercial vehicles. The directive requires that refrigerants in all new type vehicles sold in Europe after Jan. 1, 2013, have a global-warming potential (GWP) below 150 and that all cars sold after 2017 meet the lower GWP requirement.

HFO-1234yf has a GWP of 4 and reduces global warming impact by 99.7 percent compared with HFC-134a. According to third-party data, HFO-1234yf’s adoption in cars today would have the greenhouse gas equivalent impact of removing more than 4 million cars from European roads. HFO-1234yf was the subject of comprehensive testing conducted by an SAE CRP from 2007 to 2009. That CRP, which was sponsored by 15 global automakers, including all leading German automakers, major suppliers and 18 international, independent research institutes, concluded that HFO-1234yf is safe for use in automobile applications.

SAE initiated the latest CRP after Daimler raised questions about the refrigerant’s flammability. SAE said its latest CRP’s evaluation was expanded “with input from Daimler … to realistically address” Daimler’s concerns. SAE said the CRP also reviewed and analyzed extensive new data from automakers and used “conservative assumptions” to ensure its analysis “would be more likely to overestimate rather than underestimate the actual risks” of the refrigerant igniting.

With those assumptions, the CRP found “risks are still very small compared to the risks of a vehicle fire from all causes and well below risks that are commonly viewed as acceptable by the general public.”

The CRP has said throughout its evaluation that it used universally accepted engineering methods, including analysis of recent OEM testing from actual vehicle crash data, on-vehicle simulations, laboratory simulations, bench tests, and over 100 engine compartment refrigerant releases. It also employed fault-tree analyses, which it noted have been recommended and employed by numerous public and private organizations, including the U.S. Environmental Protection Agency, the U.S. Department of Energy, the International Electrotechnical Commission, the European Union Joint Research Centre, and the United Kingdom Health and Safety Executive.

SAE International, formerly known as the Society of Automotive Engineers, is an independent, global association of more than 133,000 engineers and related technical experts in the aerospace, automotive and commercial-vehicle industries.

It seems that Honeywell invested a lot in proofing the safety of its technical solution despite Daimler tests. I’m wondering how are now the relationships between Daimler and Honeywell. Do you think they will still be able to work together despite this discredit?