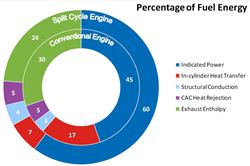 Heavy duty vehicles, such as long haul trucks, represent a significant challenge in terms of the reduction of carbon dioxide emissions. An essential element of the transportation mix of modern industrialized society, they are inherently less amenable to the type of electrification and hybridization strategies that are already contributing to reduced carbon emissions and potential long-term sustainability for the light vehicle sector. A key global imperative is therefore the substantial improvement of heavy vehicle engine efficiency. Rather than merely refine the existing four stroke diesel, the Ricardo cryogenic split-cycle engine concept seeks to redefine the engine and its combustion process through the use of a recuperated split-cycle with isothermal compression. Based on a concept investigated by Ricardo for power generation purposes in the 1990s, the split-cycle engine for heavy vehicle use was the subject of the TSB supported ‘CoolR’ feasibility project, commenced in 2011, in which Ricardo partnered with the University of Brighton.

In the new CryoPower engine project, the partners will be joined by high temperature heat exchanger specialist Hiflux Ltd, as well as a confidential advisory panel drawn from the heavy duty engines and vehicles sector. During the work of this new project – which aims to investigate, analyse and de-risk the crucial aspects of the Ricardo CryoPower engine concept – the partners will focus on system definition, technical risks and route to market, combustion system component development and thermal analysis, and recuperator development. At the end of the project, a clear development pathway for the concept will thus be established whereby key risks and opportunities have been established and further work towards the ultimate commercialization of the concept can be planned.

“The need for fundamentally new powertrain solutions to reduce the carbon footprint of heavy duty road transportation is widely accepted, not least because the electrification approaches currently being demonstrated for passenger cars are inappropriate for this scale of vehicle,” commended Ricardo chief technology and innovation officer Professor Neville Jackson. “By fundamentally re-addressing the underlying thermodynamics of the internal combustion engine in a manner not seen for many decades, we believe that the Ricardo CryoPower split-cycle cryogenic injection combustion concept offers the prospect of very significant improvements in thermal efficiency and hence reduced carbon dioxide emissions. With the success of the simulation-led feasibility study commenced in 2011, which itself builds upon our previous work in power generation sector, we are now very pleased to be able to progress this research with Technology Strategy Board support. This will help to provide a further step towards the commercialization of an extremely promising and game-changing technology for the economically crucial heavy vehicle sector.” The CryoPower engine project is supported by funding from the UK’s innovation agency, the Technology Strategy Board as part of the “Low Carbon Vehicles Proof of Concept IDP8” funding call, with balancing contributions from the project partners.

New combustion and engine architecture concepts are studied since a while now like Scuderi, 5 strokes, rotary, HCCI, CAI engines. The truth is that only Diesel conventional combustion engines are ruling the heavy duty market (despite some gas, bio-fuels and electric niches). Do you think this breakthrough concept will really manage to compete with diesel engine, not only from an efficiency point of view but also from manufacturing, aftermarket and cost point of view?