Hyundai Motor Co., South Korea’s top automaker, said Monday that all its passenger cars will use environmental-friendly air-conditioning refrigerant by 2020 as part of efforts to combat global warming. 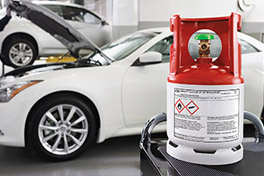 The automaker said it will adopt the R1234yf air-conditioning refrigerant for all of its passenger vehicles going forward.

In the past it used eco-friendly refrigerants for vehicles sold in Europe in order to meet the European Commission (EC) standards regarding the regulations on carbon dioxide (CO2) emissions.

R1234yf is the first in a new class of refrigerants acquiring a global warming potential (GWP) rating one 335th that of R134a (and only 4 times higher than carbon dioxide, which can also be used as a refrigerant but which has properties significantly different from those of R134a, especially requiring operation at around 5 times higher pressure) and an atmospheric lifetime of about 400 times shorter.

The environment-friendly air conditioning refrigerants are roughly 10 times more expensive than the R134a, which means the price tag of Hyundai Motor’s passenger vehicles may rise.

The automaker has been using R134a refrigerant, which has been cited for CO2 emissions, in its vehicles sold here, as South Korea has no regulations preventing its use.