While the polar vortex has had much of the country in a vise grip, its impact has created a new condition – the “pothole vortex.” However, the 2014 Lincoln MKZ’s standard continuously controlled damping (CCD) suspension provides some protection against jarring impact and wheel/tire repairs from the dreaded highway pitfalls.

Lincoln CCD is part of the overall Lincoln Drive Control system that orchestrates the performance of a suite of elements to enhance driving dynamics. CCD has 12 sensors that can read nearly 50 inputs from road conditions in two milliseconds.

In a three-phase process, CCD helps to lessen the impact of dramatic road elements like potholes:

In normal conditions, the CCD system on the Lincoln MKZ provides real-time data to adjust the shocks to deliver the best compromise between ride and handling.

When a pothole is detected and in the event a wheel drops rapidly, the specially developed pothole algorithm software applies additional damping to the shocks to keep the tire and wheel from dropping as deeply into the pothole. 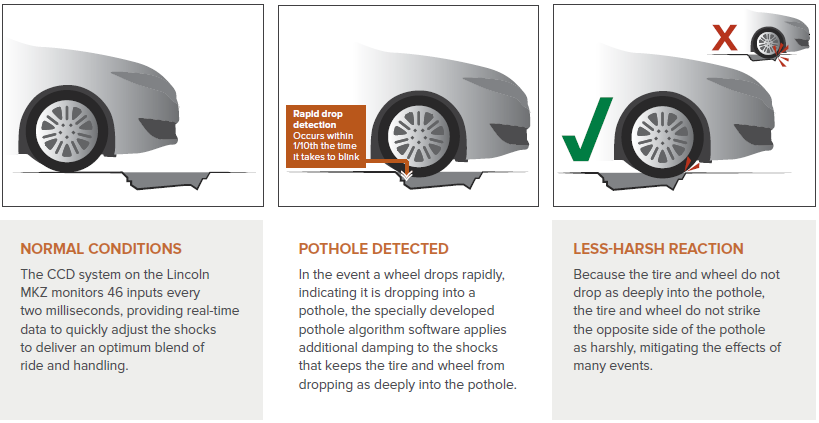 CCD offers three modes (sport, normal, comfort) that are accessible using MyLincoln Touch™ or controls on the steering wheel. It uses a suite of sensors that constantly monitor the vehicle’s suspension motion, body movement, steering and braking. The algorithm uses data from these sensors to adjust the suspension damping in milliseconds to help keep the body of the vehicle quiet and on track:

Having this pothole detection system working efficiently will depend on the vehicle speed. It is clear that it will mitigate risks at low speed, but at high speed, the tire and wheel resistance will be of a higher importance. Do you think that this system will be valuable through statistical studies of flat tire cases?