To be launched in the ADAM small car next year with an all-new six-speed manual gearbox, the 12-valve, 1.0l turbo is the first in a new, modular family of three and four-cylinder gasoline engines in the up to 1.6 liters class. State-of-the-art technologies such as direct injection, continuously variable valve timing, and a lightweight aluminium cylinder-block, are key efficiency enablers. Opel expects the new engine family to deliver fuel economy and CO2 emissions significantly lower than 100 g/km. 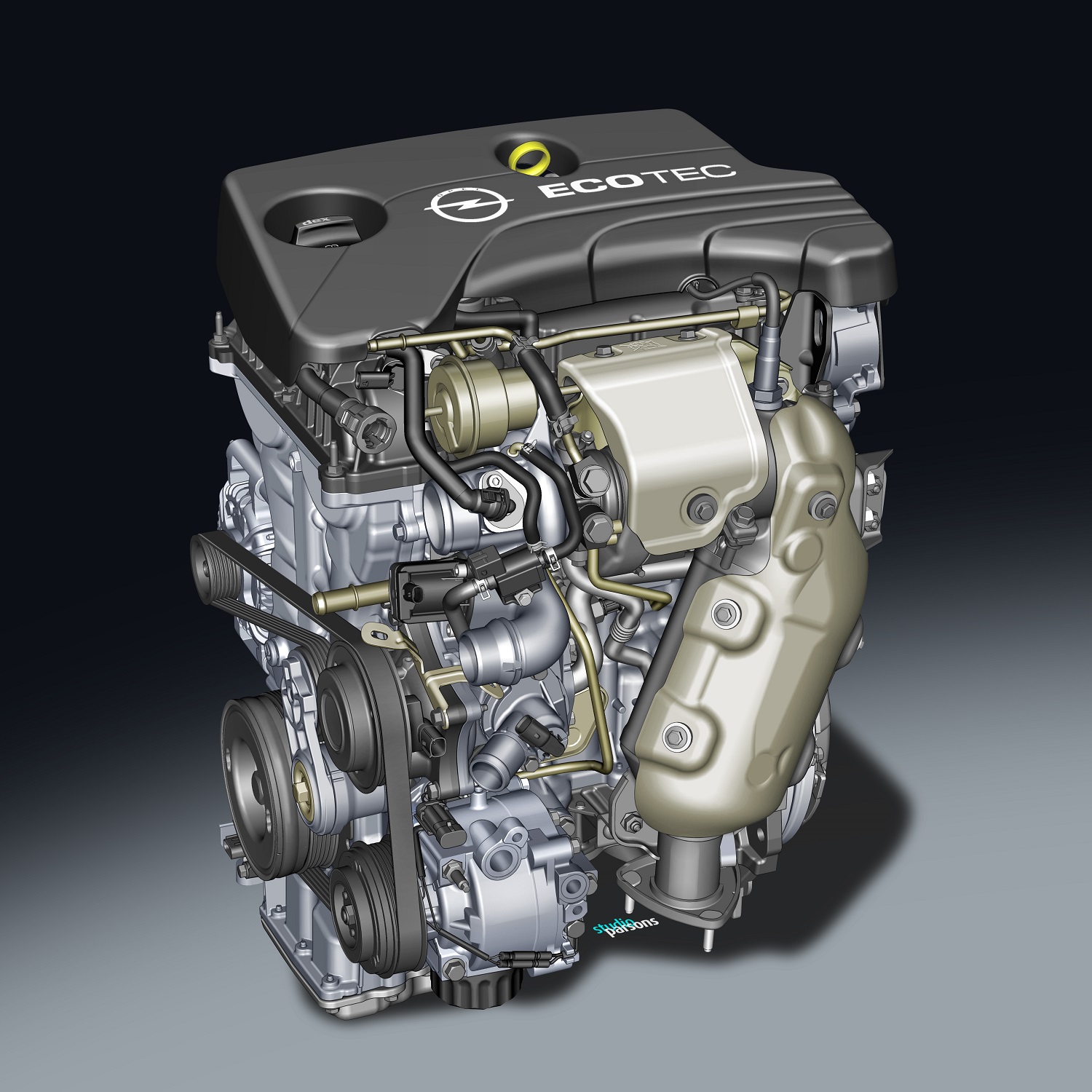 “In developing this small engine, we not only set out to minimize fuel consumption and CO2 emissions, we also wanted to demonstrate that three cylinders can be just as refined as four or more,” says Dr. Matthias Alt, Opel’s Chief Engineer, Small Gasoline Engines. “We tackled at source the balance, noise and vibration issues typical of conventional three-cylinder engines, and we’re confident customers will be pleasantly surprised by the results. This is a very lively and refined three-cylinder engine which doesn’t compromise on driving fun.”

Improved accoustics despite usage of 3 cylinders

Opel engineers started with a clean sheet of paper, which enabled the incorporation of a series of measures to eliminate the typical, ‘off-beat’ running characteristics which have traditionally accompanied the economical driving appeal of three-cylinder engines.

The cylinder block made of high pressure die-cast aluminum is designed to reduce radiated and structure-borne engine noise, as well as reduce weight. The high-pressure fuel rail and injectors are also structurally isolated from the cylinder head to minimize the transmission of pulsing, while the fuel pump and fuel line are acoustically treated.

Another major contributor to refinement is the installation of a balance shaft in the oil sump. Driven by a chain with inverted teeth for quiet running, the counter-rotating shaft spins at crankshaft speed and is mass-optimized to offset the inherent vibrations from a three cylinder operation.

Other noise attenuation measures include: acoustically-optimized covers for the top and front of the engine, the intake manifold and camshaft housings; crankshaft isolation with iron main bearing inserts; inverted teeth for camshaft drive chain; a low-hiss turbo compressor; and a lower oil pan in steel.

As a result, in bench testing at full throttle, it emits lower noise levels across all engine speeds than similarly powerful gasoline turbos with 1.6-liters displacement. 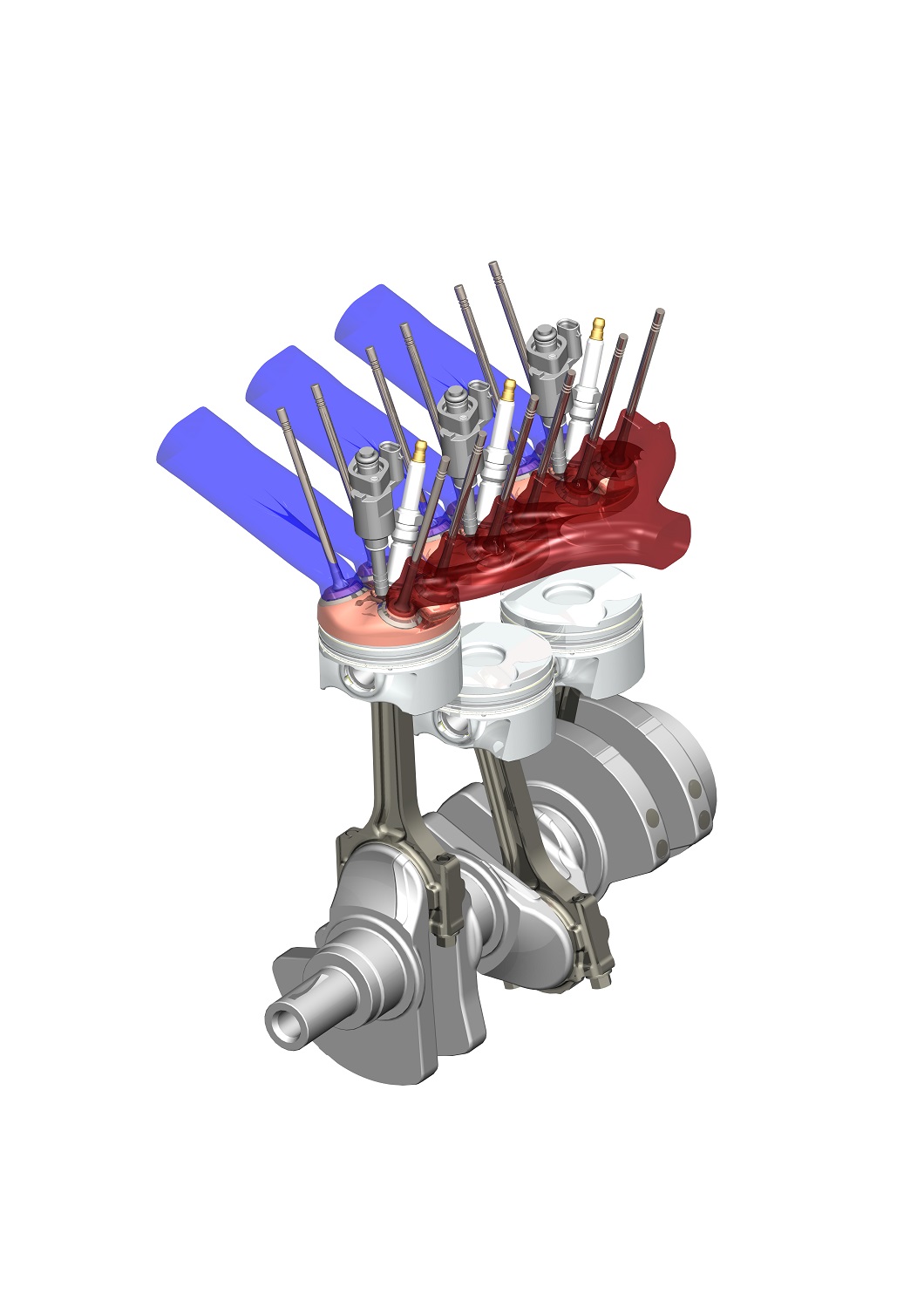 Precision engineering is used in the integration of the exhaust manifold inside the aluminum cylinder head, which is bolted directly to the low-inertia, water-cooled turbocharger. This compact installation contributes to the delivery of a fast boost charge for low-end power. Maximum torque of 166 Nm from 1,800 rpm is almost 30 percent higher than the 1.6-liter engine generates at the same rpm.

The six-hole fuel injectors are centrally located above each piston to provide efficient combustion, and dual cam-phasing enables variable valve timing for optimum engine breathing. A twin displacement oil pump and a switchable water pump, which is disengaged when the engine coolant is cold in order to accelerate warm-up, also contribute to low fuel consumption.