Mazda Motor Corporation has announced that the upcoming all-new Mazda2 (known as Demio in Japan) will feature the SKYACTIV-D 1.5l, a newly developed 1.5-liter clean diesel engine making use of the company’s next-generation SKYACTIV technology.

Similarly to the next generation SKYACTIV-D 2.2l clean diesel engine available in models such as the Mazda CX-5, the SKYACTIV-D 1.5l was developed in the pursuit of ideal combustion despite a very low compression ratio.

Inheriting technologies from the SKYACTIV-D 2.2l, additional advances were made to the SKYACTIV-D 1.5l to further enhance the engine and make it suitable for subcompact vehicles. Additional technologies include an expanded homogenous lean burn range, further reduction in mechanical resistance, and insulation technology to curb the increase in cooling loss associated with a smaller engine size. 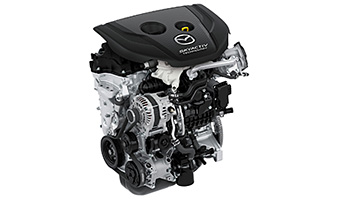 Key features of the SKYACTIV-D 1.5l

The engine design adopted by Mazda is quite exotic with respect to global trend to increase compression ratio. Additionally, they claim to run partly in homogeneous lean burn combustion (So called HCCI for Homogeneous Charge Compression Ignition) which is quite tricky from a timing control point of view. Do you think the engine really operates in HCCI, even more if the compression ratio is quite low?