Variable valve train systems are a central element for increasing the efficiency of modern internal combustion engines. Schaeffler supplies a range of different products tailored to customer requirements through to UniAir, a fully-variable electrohydraulic valve control system. The UniAir system – of which around half a million units have been supplied to date – has been expanded to include functions that allow modern combustion processes such as the Miller and Atkinson cycles and that make comfortable cylinder deactivation possible. “The volume production start of UniAir technology five years ago was the beginning of a new era in valve control systems. This fully-variable valve control system set a new technological standard for environmentally-friendly and dynamic engines, and now opens up further optimization potential for our customers by means of its expanded control strategies”, explains Prof. Peter Pleus, CEO Automotive at Schaeffler.

There have also been new developments in cylinder deactivation: Instead of deactivating only specific cylinders, future systems will deactivate each cylinder individually on a rolling basis. At the same time, Schaeffler is developing a range of mechanical switching elements and camshaft phasing units even further. The company’s electromechanical camshaft phasing units, which are ready for volume production, are just one example of this.

The activation of the intake and exhaust valves plays a key role in fuel efficiency. “The ideal situation is to have a valve train with high degrees of freedom in which the lift, opening point, opening period, and closing point can be set independently of one another”, explains Dr. Martin Scheidt, who is in charge of engine system development at Schaeffler. “This means that the charge cycle losses that occur during air intake can be significantly reduced”. A fully variable valve train also has a positive effect on the combustion sequence.

The fully variable UniAir valve control system, which has proven itself in volume production since 2009, is a solution that offers variability. The valves are not directly activated by the camshaft here, but by an electrohydraulic phasing unit installed between the camshaft and valves. The valve can be opened variably at almost any point in time within the maximum curve defined by the control cam. Two new developments make it possible for the valve lift curve of gasoline and diesel engines to be made more variable: For gasoline engines, Schaeffler provides an optional two-stage control cam. Because of its boot-like shape, this cam allows a large valve overlap during which the intake and exhaust valves are open simultaneously and exhaust gas remains in the combustion chamber. This type of internal exhaust gas re-circulation reduces NOx emissions to the same degree. In this way, variable residual gas adjustment can be implemented even without the use of a camshaft phasing unit. The solution is designed differently for use in diesel engines, as the space between the piston crown and cylinder head at the top dead center is too small for a large valve overlap in diesel engines. Schaeffler’s engineers therefore rely on a double cam to drive the UniAir system. The second cam is offset in such a way that it activates the intake valve only when the exhaust valve is open. Even here, the valve lift is freely selectable within the cam contour. 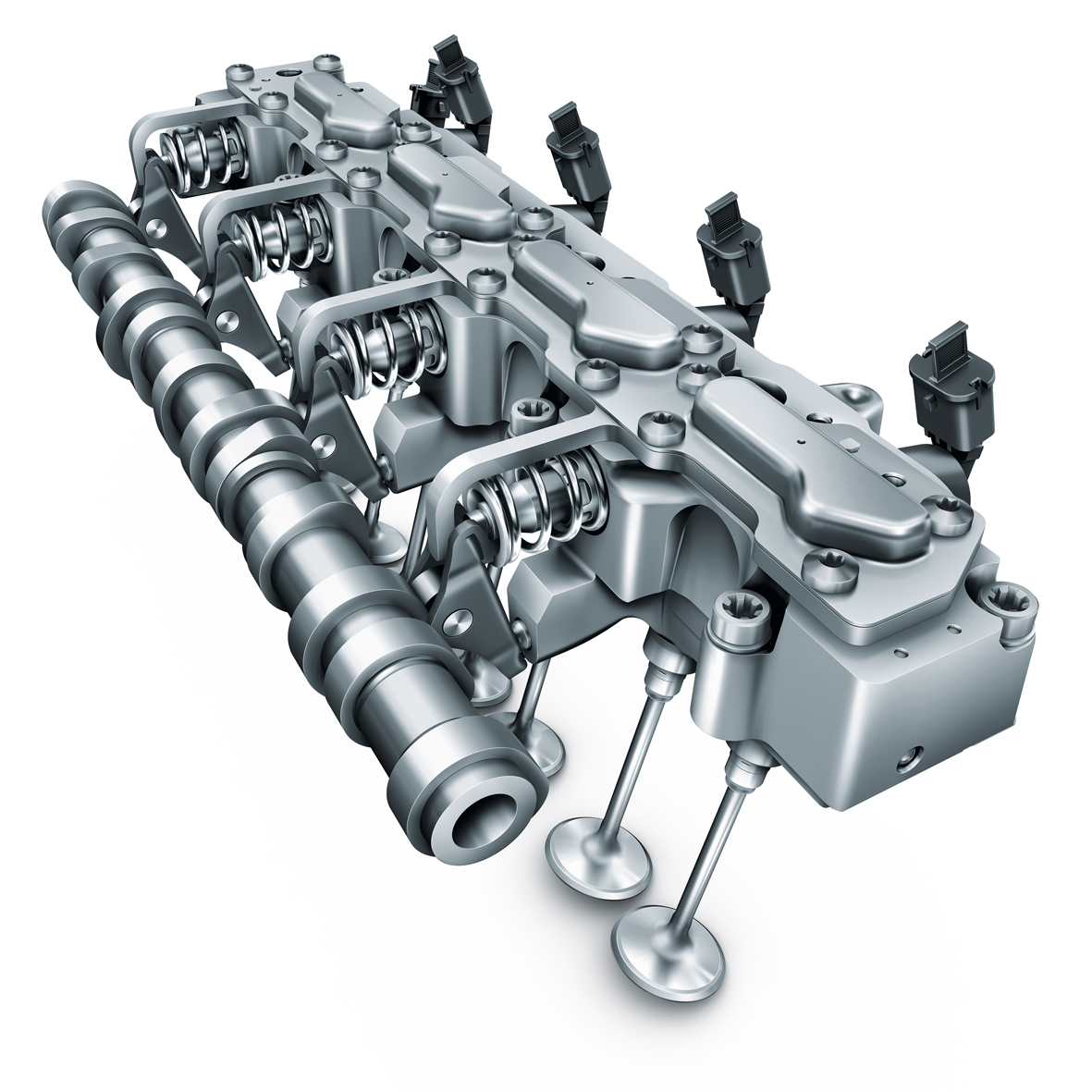 Partially and fully variable valve train systems also allow individual cylinders to be deactivated during the drive. This allows the fuel consumption of a four-cylinder engine to be reduced by up to six percent through temporary operation with only two cylinders. This cylinder deactivation is used particularly frequently when driving constantly at mid-range speed and with a low engine load. The deactivation of specific cylinders is mostly carried out using hydraulically switchable valve train components. In the future, the UniAir system will allow cylinder activation to be carried out on a rolling basis, i.e. in such a way that each cylinder can be deactivated in succession. This has the advantage that the deactivated cylinders do not cool down, which means that the system can be activated more quickly after a cold start.

Tests carried out at Schaeffler have shown that this rotating deactivation method can behave well in three-cylinder engines. Deactivating one of three cylinders over an extended period of time would lead to unacceptable vibrations. Rolling deactivation – which ultimately results in “1.5-cylinder operation” – means that the frequency of the vibrations shifts to a range that can easily be controlled using a dual mass flywheel and centrifugal pendulum-type absorber.

Variability is finding its way into more and more areas of automobile design. Camshaft phasing units, which are becoming an increasingly standard feature of new engines, represent its technical point of entry. Although they do not control the valve lift, the opening point of the valves can be adjusted to match the engine speed and the driver’s desired engine output. Timing adjustment is mostly carried out hydraulically today, but even so, progress in this area is unceasing. Schaeffler will shortly be putting an electromechanical phasing unit into volume production. 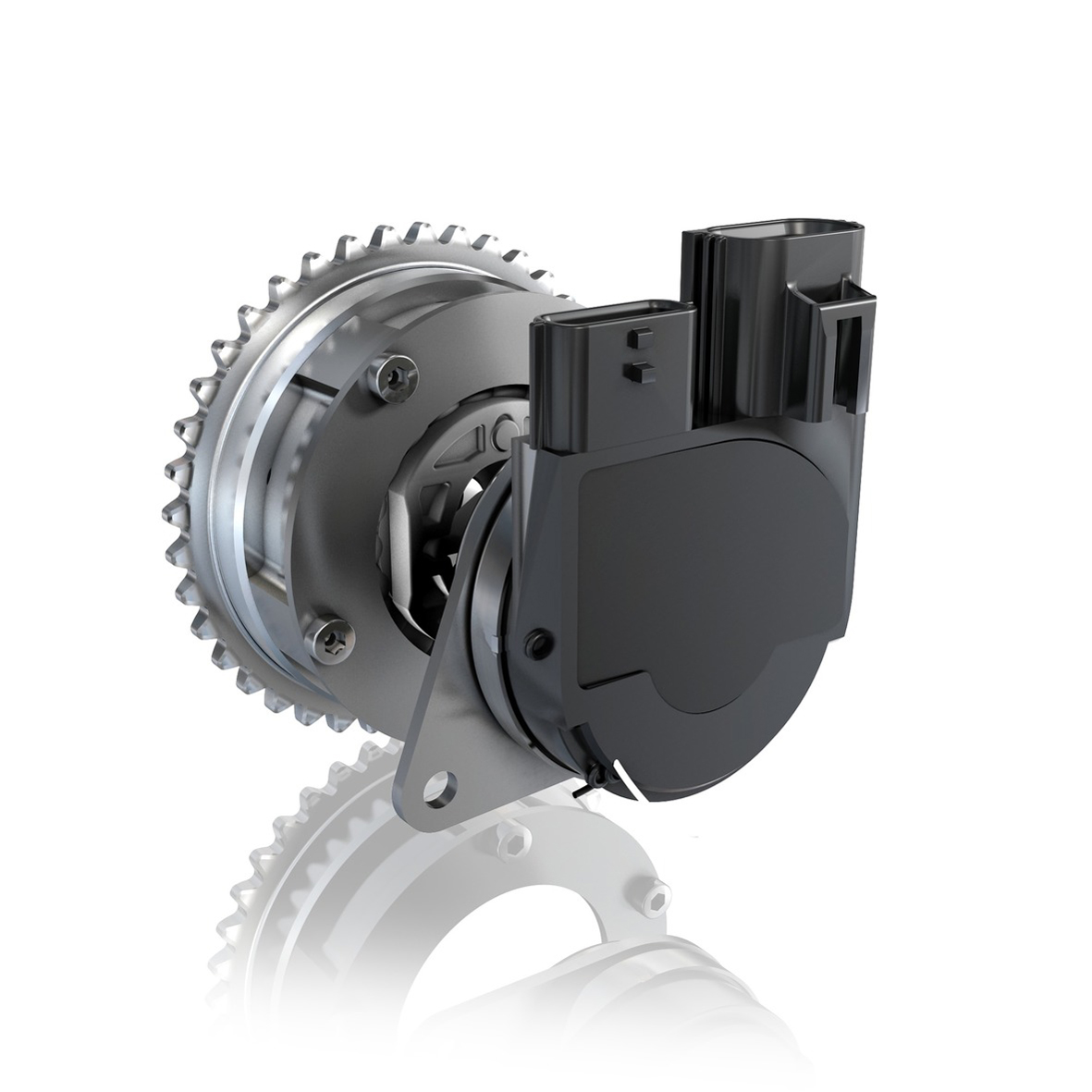 Electromechanical camshaft phasing offers several advantages: Phasing becomes faster and more precise, and the timing becomes freely selectable when the engine is started. This is an important option for the increasing number of engine start-stop systems and hybrid drives with which the internal combustion engine is switched on and off multiple times during the drive. However, hydraulic phasing systems also continue to offer potential, which Schaeffler is exploiting with the presentation of a pressure-less supplementary oil volume accumulator.

I’m just wondering if it is Schaeffler that is supplying the Multi-Air system to Fiat because the concept is the same and that the technology might be patented. On which vehicles do you think this UniAir system is installed?