In an innovative move to assist pedestrian recognition of electric vehicles (EVs), Nissan has taken a leading role in the European Commission-led project, eVADER, to create a pioneering audible pedestrian alert system.

In partnership with 10 other consortium members, Nissan has collaborated in the creation of a potential next generation pedestrian alert technology which produces effective and targetable audible cues to alert pedestrians and other vulnerable road users to the presence of a nearby EV, whilst having minimal impact on noise pollution levels.

Pedestrian alert technology is currently a hot topic, as growing sales of EVs have led to discussions over the pros and cons of quiet EVs. The low sound levels have been heralded as a strong benefit, as they could contribute to a drastic reduction in noise pollution.

As one of the leading manufacturers in the EV market, and developer of the Approaching Vehicle Sound for Pedestrians (VSP), fitted as standard equipment to all Nissan EVs, Nissan has made this area of research a priority. 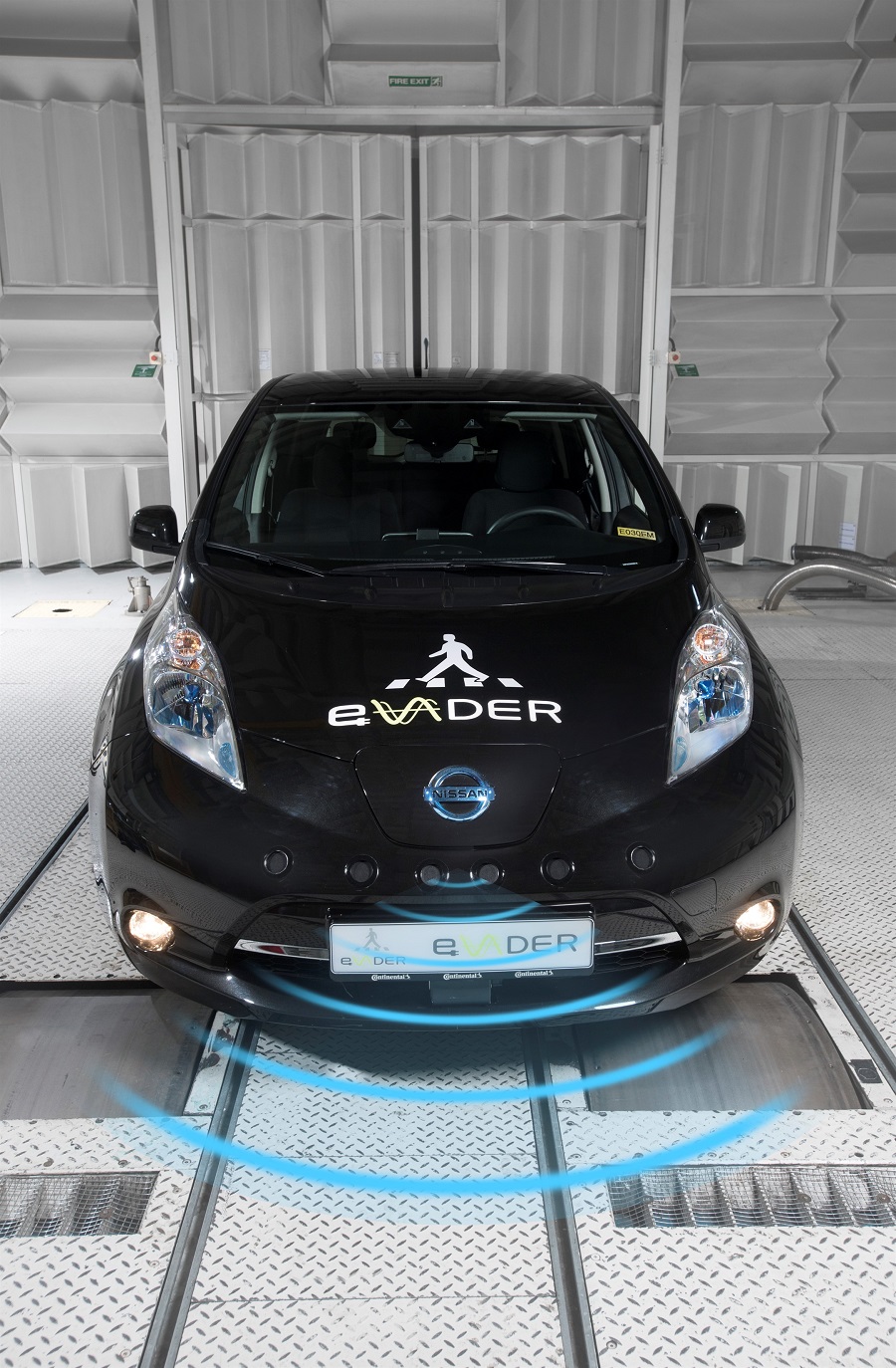 David Quinn, Nissan’s e-VADER Project Leader said: “Pedestrian safety is of the utmost importance to Nissan, which is why we already have a pedestrian alert installed in our EVs as a preventative measure. As leaders in the EV market, we were keen to use our considerable experience to examine possible systems for future development in this field. Our objective has been to find an optimum balance between ensuring the cars are detectable, whilst retaining the reduction in noise pollution, which is one of the great benefits that our EVs offer.”

Nissan has played a pioneering role in bringing EV technology to the mass-market. In 2010, the introduction of the Nissan LEAF – the first mass-market, all-electric EV launched globally – changed the motoring world. It remains the best-selling EV in history.

As a leading partner in the eVADER project – which took three years to successfully complete – Nissan drew on its EV expertise to integrate the range of technologies provided by other consortium members and Nissan into the demonstration vehicle, and worked to ensure that the sounds created were clearly audible, whilst having as little impact as possible on ambient noise levels.

The sound created not only had to be directionally beamed at targeted pedestrians, it also had to keep annoyance levels to a minimum. Siren-like noises were ruled out at an early stage, as they were found to be irritating, loud and, in some cases, emotionally upsetting to other road users. 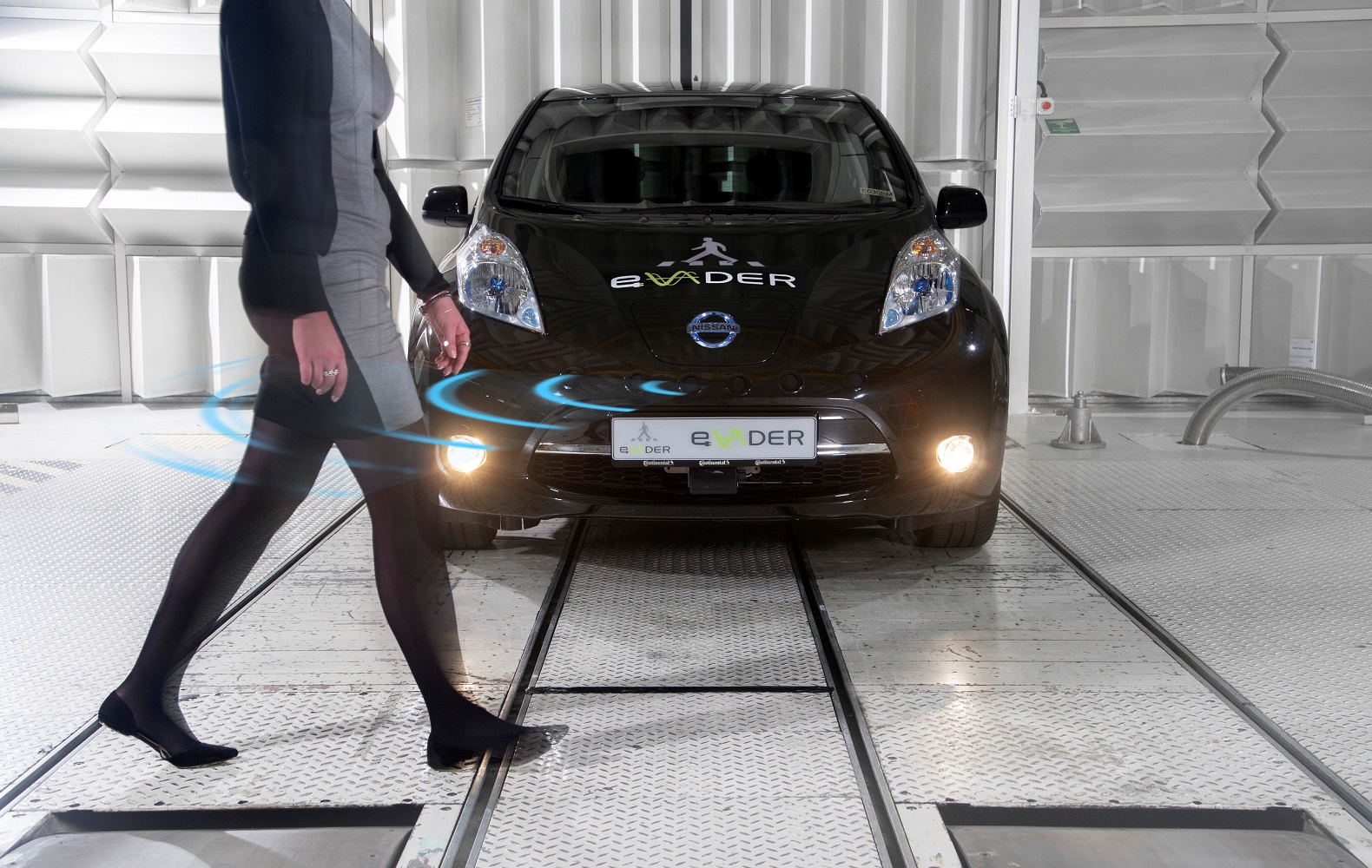 The final version of the system features a camera built into the windscreen, which is programmed to recognize pedestrians, cyclists and other road users. On detection of a road user, six loudspeakers directionally beam sound at the target to alert them of the presence of the EV. The sound is up to five decibels lower than the sound of a conventional petrol or diesel engine vehicle.

Nissan built this system into a Nissan LEAF for real-life trials, and the vehicle was used to showcase the completed alert system at a concluding event in Barcelona in December 2014, where it was well-received by the visually-impaired community.

The research and results collated from this project form a reference material for future research into this area, and it is likely that it will be utilized to shape future EU legislation on EV pedestrian alert sounds.

The RapidE: A new electric vehicle concept by Aston Martin