Fraunhofer researchers will exhibit the demo model of an energy-efficient heating system for electric cars at the IAA: a coated film that produces a broad, radiant heat.

Electric car drivers now have one more reason to love the summer, because in the winter, the vehicle’s range declines markedly due to the additional energy demanded by the heating system. Electric cars generate next to no heat as opposed to conventional passenger vehicles, which produce more than enough engine heat to heat the interior. An additional electric heater is required. This is supplied with power by the same battery that provides the motor with energy. “In the most unfavorable case, you can only drive half the usual distance with the car”, says Serhat Sahakalkan, project manager at the Fraunhofer Institute for Manufacturing Engineering and Automation IPA in Stuttgart.

Researchers at the IPA have developed a film-based panel heater, which quickly provides a comfortable warmth in electric cars, which is – particularly on short journeys – more effective than former electric heaters. The heating concept is based on a film that is coated with conductive carbon nanotubes (CNTs). For this, the researchers spray on a very thin layer of CNT dispersion. “The film is glued to the inner door trim and generates a comfortable warmth there in the area of the armrest within a very short time”, Sahakalkan explains. The heater functions in accordance with the Joule principle: When electricity flows through the film, it comes across a natural resistance between the individual nanoparticles. These “collisions” generate heat. 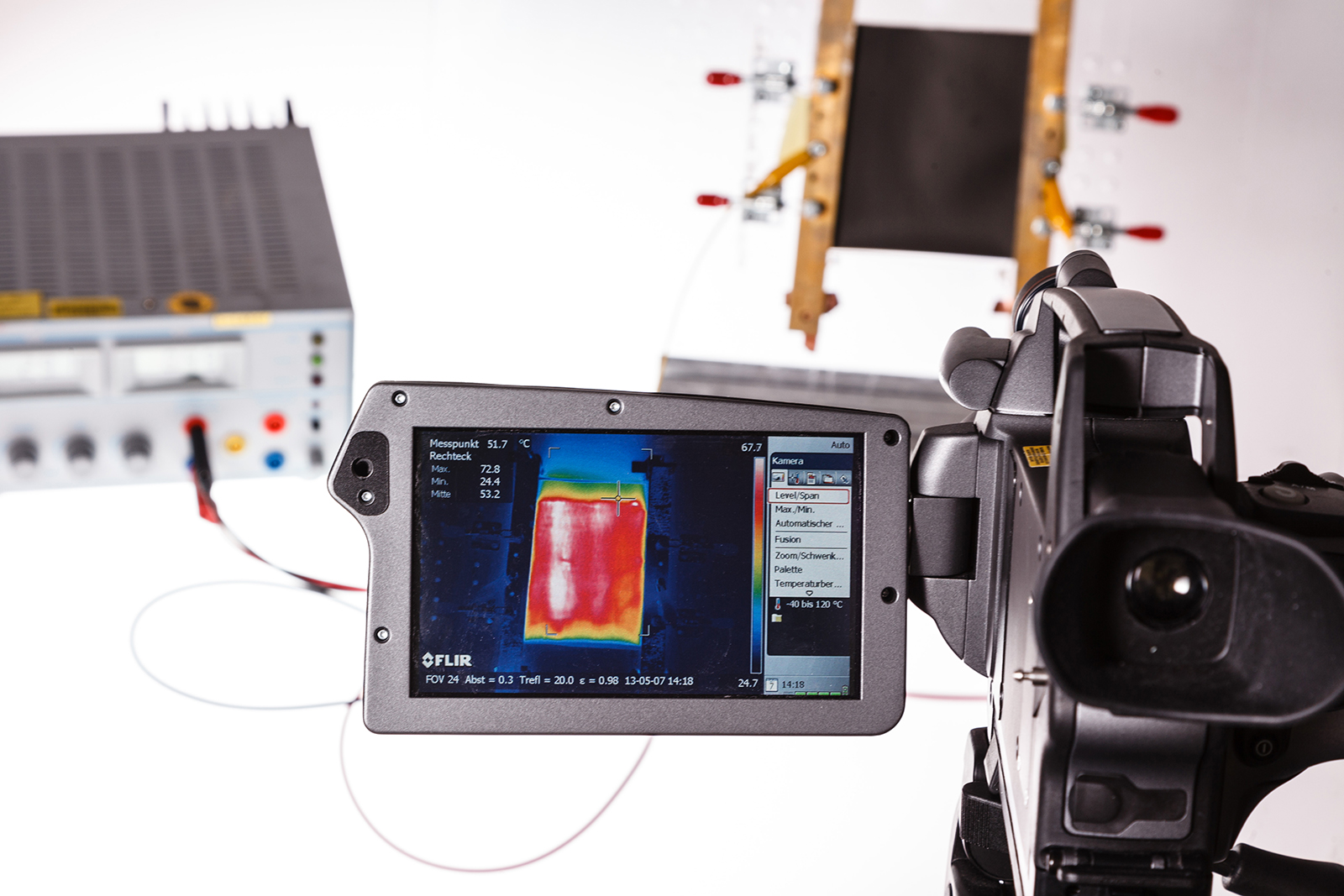 Conventional electric resistance heaters of the type used in electric cars, also make use of this principle. Usually, the conductive material used is copper wire, which is embedded in silicone mats, for example. The solution of the researchers from Stuttgart, however, offers several advantages: While the copper wire heaters available at present are relatively “bulky” and take up quite some installation space, the film heater consists of a layer of conductive material with a thickness of only a few micrometers. It can be flexibly applied to the most various surfaces and contributes to saving energy and costs due to its low weight.

The CNTs themselves have a low heat storage capacity, as a result of which the generated heat is directly released into the environment. As opposed to the wire-based variant, the heat is evenly distributed here over the entire surface of the film, which increases efficiency. When the driver switches the heating off, the material cools down just as quickly. “These fast response times are ideal for short distances such as urban trips”, Sahakalkan explains. The desired heating output can be infinitely adjusted by the user. Even isolated defects do not impair functionality. In wire-based heating systems, for example, even minor breaks in the metal can lead to failure.

In order to evenly apply the film to the arched door trim, the researchers divide it into small modules and then glue them to the door trim in sections: “Slight creases arise at the curvatures, which change the spacing of the electrodes. Even heat distribution would then no longer be ensured”, the scientist states. In the longer term, the experts from Stuttgart intend to further simplify the procedure and spray the CNT dispersion directly onto the corresponding vehicle components. “This would make the production process considerably more economical – particularly in comparison to wire-based solutions”, Sahakalkan says. A first demonstration model of the film heater will be presented by the scientists in September at the IAA in Frankfurt. The trade fair will take place from September 17th to 27th, the press day September 15th and 16th.