Honda Motor today announced a new driver-assistive system, Honda SENSING, which will first be equipped to the all-new Legend that plans to go on sale in Japan before the end of this year, and then successively to more models in the future.

Honda SENSING is a system consisting of two types of sensors with different characteristics. One is a millimeter-wave radar located inside the front grille, and the other is a monocular camera mounted on the upper, inside part of the windshield. 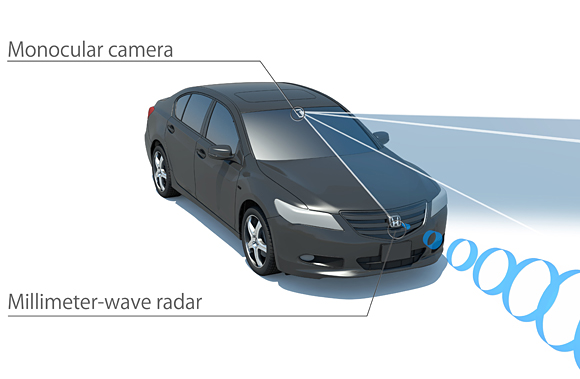 With further improvement in performance, the new millimeter-wave radar expanded its scope of detection to include pedestrians regarded as being hard to detect due to their low rate of radio wave reflection as well as the position and speed of target object. Moreover, the monocular camera identifies attributes and sizes of pedestrians and other target objects which come in range within approximately 60 m. ahead of the vehicle, achieving recognition with improved accuracy.

With the significant improvement in the precision of these sensing devices, six new functions such as the “Pedestrian Collision Mitigation Steering System (world’s first*1)” were added to the existing driver-assistive system. To accommodate these versatile functions, the data processing capability of the system was improved. The system now recognizes not only its surroundings but also the intentions of the driver and conditions of the vehicle, and applies collaborative control over certain components of the vehicle including the braking system and steering wheel. In the areas of vehicle speed / following distance control and lane keeping control, the system assists the driver during normal driving as well as in a risk avoidance maneuver in case of an emergency.

Key functions of the Honda SENSING

The millimeter-wave radar and monocular camera detect vehicles directly in front, oncoming vehicles and pedestrians. When there is a risk of collision with a vehicle in front or a pedestrian, the system provides the driver with audio and visual warnings. When the distance gets closer, the system automatically applies gentle brake pressure to give a sensory warning to the driver. When the distance gets even closer, the system automatically brakes hard to support the driver’s collision avoidance effort. Moreover, when the vehicle strays into an oncoming lane and there is a risk of collision with oncoming vehicles, the system provides audio and visual warnings as well as vibrations on the steering wheel to facilitate the driver’s collision avoidance actions. When no action is taken by the driver to avoid collision, the system applies braking force to help reduce the impact speed to mitigate any damage in the case of collision. 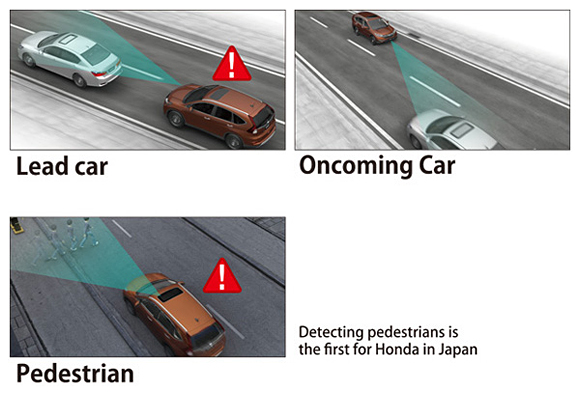 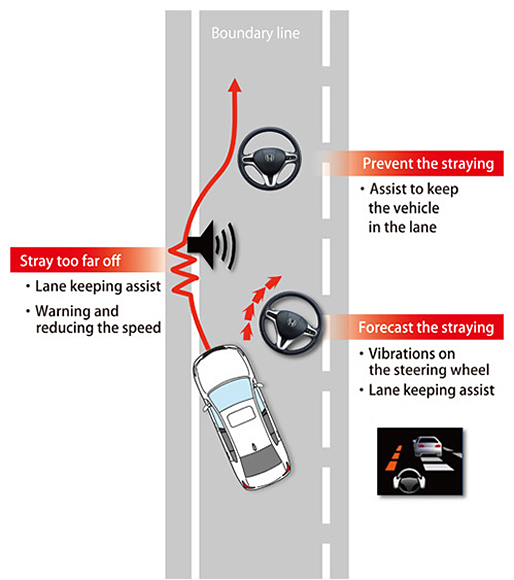 The millimeter-wave radar and monocular camera detect pedestrians and boundary line on the side strip of the road. When the system forecasts a collision with a pedestrian as a result of the vehicle straying from the lane toward the side strip, it provides audio and visual warnings and turns the steering wheel toward the other direction to facilitate the driver’s collision avoidance effort.

The millimeter-wave radar and monocular camera detect the distance and speed gap from the vehicle ahead. The system controls the acceleration and braking operations so that an appropriate distance will be maintained. By expanding its range of operation to 0 km/h, the system will reduce the burden on the driver while driving on congested highways. 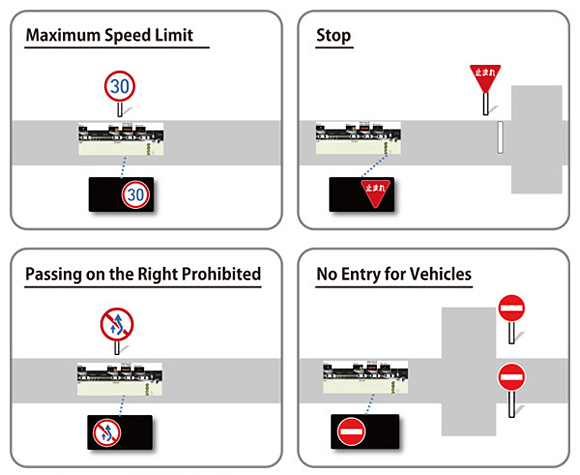 The Millimeter-wave radar detects vehicle directly in front or other objects in close range while the vehicle is stopped or while driving at a very low speed. If the driver presses down the acceleration pedal too suddenly while there is an object in front, the system prevents sudden acceleration and provides audio and visual warnings and vibrations to the acceleration pedal.

The millimeter-wave radar detects when the car directly in front starts up from standstill traffic. The system will give audio and visual notification of the departure of the car in front.