Clean Diesel Technologies, Inc., a specialist in advanced emission control technology, announced new proprietary technology to replace costly use of platinum group and rare earth metals in catalytic converters.  CDTi has been granted the first two of a family of patents for Spinel™, a proprietary clean emissions exhaust technology that will reduce the cost of attaining more stringent clean air standards.

The new technology will power multiple catalytic product lines that the Company believes will be highly disruptive to the traditional platinum-based or rare-earth based device industry.  This is CDTi’s first public announcement regarding Spinel technology, the development of which has been kept confidential until now.

About Spinel usage in catalytic converters

Spinel was the name initially given to naturally-occurring magnesium aluminate (MgAI2O4) and is now used to describe any composition with the same structure. Spinel™ technology may employ numerous low-cost metals in the spinel structure enabling use in a wide range of engine and vehicle applications, both gasoline and diesel, as well as other potential vertical markets. 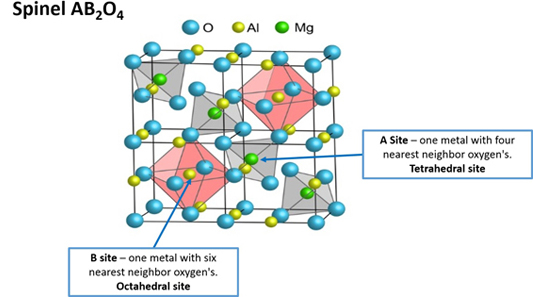 In addition to significant cost savings over conventional coating formulations, the Spinel™ technology structure is versatile and stable. The versatility is critical for optimizing future generations of products to meet changing catalytic conversion needs for rapidly evolving engine technologies and increasingly stringent clean air standards. The stability is critical to provide superior catalytic performance over time and at extreme temperatures for lifetime durability. 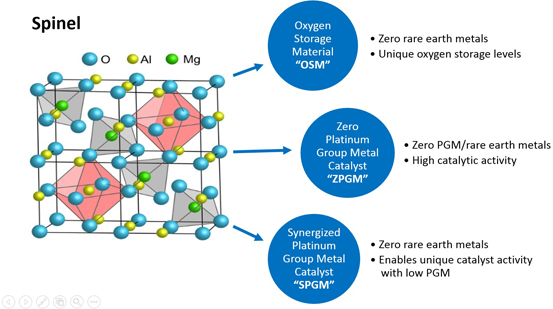 CEO Chris Harris commented, “Currently global OEMs annually spend billions of dollars on PGMs and rare earth metals for their catalytic converters. These costs are expected to dramatically increase with conventional technology as new emissions regulations kick in. Spinel solves a major industry supply and cost problem and marks a major breakthrough both for us and for all OEMs around the world manufacturing fossil fuel-powered engines.”

CTO Dr. Stephen Golden added, “The Spinel technology is the result of hard work and ingenuity by our R&D team. It is an entirely new materials science pathway to meeting tighter regulations at much lower cost.  Key validation vehicle testing is underway in parallel to aggressively building a broad IP portfolio as we incorporate Spinel into specific products for global OEMs.”

Expensive PGM metals, which include platinum, palladium and rhodium, are used in the manufacture of emission control catalysts, with palladium and rhodium being the primary components used in catalysts serving the global light duty vehicle market. According to Johnson Matthey PLC’s “Platinum 2013 Interim Review,” in 2013, over 70% of all primary platinum and 80% of all primary rhodium produced originated in Southern Africa. Russia and Southern Africa combined supplied over 75% of palladium.

Rare earth metals such as cerium, neodymium and lanthanum, also referred to as rare earth elements, are chemical elements used in many devices that people use every day, including computers, cell phones, rechargeable batteries and catalytic converters. As the global demand for these devices increases the use of rare earth metals is expected to rise. According to a 2014 U.S. Geological Survey Mineral Commodity Summary, the estimated value of refined rare earth metals imported by the U.S. in 2013 was $260 million. An estimated 79% of rare earth metals used in the U.S. were imported from China with 65% utilized in catalysts.

This solution could have much more impacts that only allowing big savings for the OEMs. It would allow to oversize the after-treatment system in order to allow more engine out emissions and then to reduce the fuel consumption of it. That would reshuffle the trade-off between engine out emissions, cost and fuel economy. However, I think that this technology is yet to be proven as there are very few information about it. How mature do you think the technology is so far?