In our previous post, we have described the new V6 power unit that will equip every F1 team supplied with Renault powertrains. Today, Renault F1 introduces how it will be operated in real race conditions. 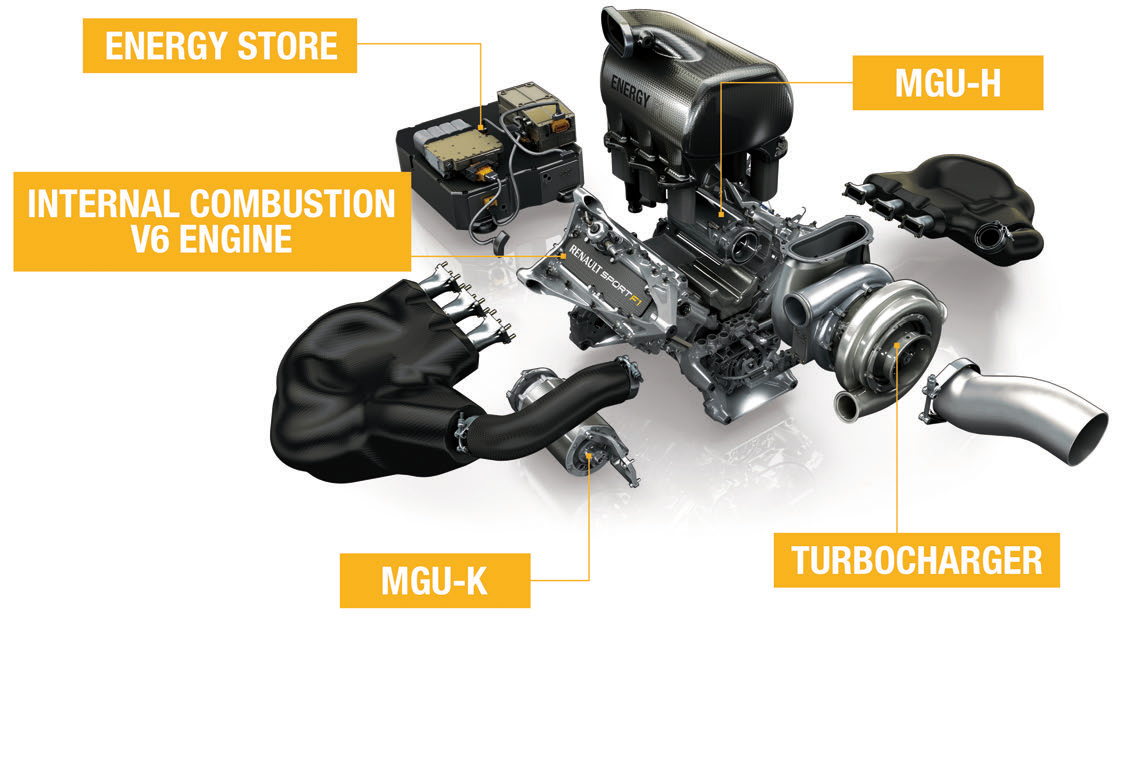 Under acceleration (e.g. down the pit straight) the internal combustion engine will be using its reserve of fuel. The turbocharger will be rotating at maximum speed (100,000 rpm). The MGU-H, acting as a generator, will recover energy from the exhaust and pass to the MGU-K (or the battery in case it needs recharging). The MGU-K, which is connected to the crankshaft of the ICE, will act as a motor and deliver additional power to pull harder or save fuel, dependent on the chosen strategy.

At the end of the straight the driver lifts off for braking for a corner. At this point the MGU-K converts to a generator and recovers energy dissipated in the braking event, which will be stored in the battery.

Under braking the rotational speed of the turbo drops due to the lack of energy in the exhaust which, on traditional engines, leads to the curse of the turbo engine – turbo lag. This phenomenon occurs when the driver re-accelerates: Fuel injection starts again and generates hot exhaust gases which speed up the turbo, but it needs time to return to full rotational speed where the engine produces 100% of its power. To prevent this lag, the MGU-H acts as a motor for a very short time to instantaneously accelerate the turbo to its optimal speed, offering the driver perfect driveability.

Over the course of the lap, this balance between energy harvesting, energy deployment and (carbon) fuel burn will be carefully monitored. 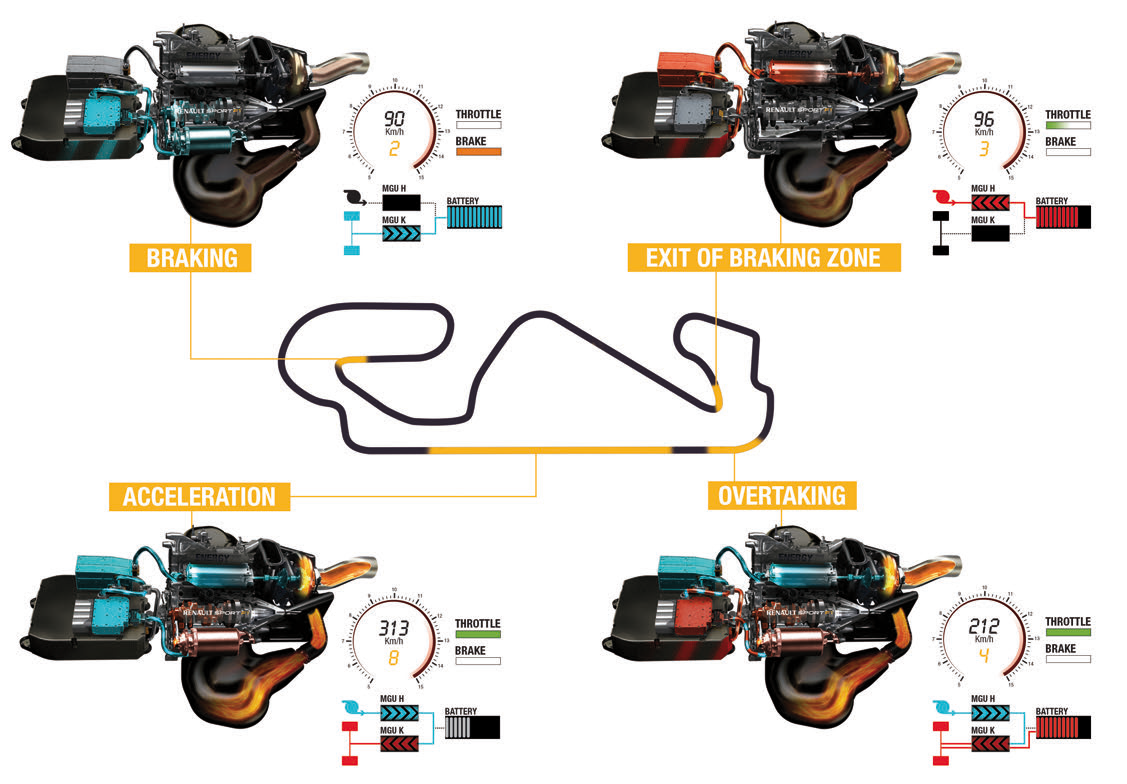 “The use of the two types of energy needs an intelligent management,” Technical Director for new generation Power Units, Naoki Tokunaga, explains.

“The overall objective is to minimize the time going round a lap of the circuit for a given energy budget. Obviously, if you use less energy, you will have a slower lap time. That’s fine. However, what is not fine is to be penalized more than the physics determines necessary. In the relationship between fuel used versus lap time, there is a borderline between what is physically possible and the impossible – we name it ‘minimum lap-time frontier”

“We always want to operate on that frontier and be as close to the impossible as we can. The strategy is subject its own limits, namely the capacity of the PU components and the Technical Regulations. The power output of the engine subject to its own limits, plus MGU-K power and the energy the battery can deliver to it are all restricted by the rules. It is a complex problem. The solution is therefore determined by mathematical modelling and optimization – we call it power scheduling.”

“As a result, there will be a complex exchange of energy going on between the components in the system network, at varying levels of power over a lap. This is completely invisible to the driver as it is all controlled electronically by the control systems. The driver will be able to feel it but no driver intervention is normally required, so they can concentrate on the race in hand. Of course, there will be certain driver-operated modes to allow him to override the control system, for example to receive full power for overtaking. Using this mode will naturally depend on the race strategy. In theory you can deploy as many times as you want, but if you use more fuel or more electrical energy then you have to recover afterwards. The ‘full boost’ can be sustained for one to two laps but it cannot be maintained.”

The fact that the driver does not control the balance between fuel and energy does not lessen the involvement of the driver in any way, and in fact his job will be more complicated than in previous seasons. He will still be fighting the car to keep it under control during hard braking, managing braking to avoid understeer into a corner, applying delicate control over the throttle pedal mid-corner, sweeping through complex corners, throwing the car into high speed corners. In terms of driving style, there may well need to be some adjustments.

“The throttle response will be different so the driver will need to readjust for this,” Tokunaga explains. “Effectively, once the driver applies full throttle, the control systems manage the power of PU, with the aim to minimize the time within the given energy. However full throttle no longer means a demand for full engine power. It is an indication to the PU given by the driver to go as fast as possible with the given energy. He will still need to adjust for the different ‘feel’ of the car with the energy systems.”

Race strategy and race management will also be more flexible than in the past and the optimum solution will vary vastly from circuit to circuit, dependent on factors including percentage of wide open throttle, cornering speeds and the aerodynamic configuration of the car. “In essence, engine manufacturers used to compete on reaching record levels of power, but now will compete in the intelligence of energy management,” Tokunaga summises.

Rules for the qualifying sessions

In 2014, the fastest car on a Saturday will still start on pole since the sessions will be run ‘flat out’. The cars will still be limited by the fundamental fuel flow restriction of 100kg/h but the 100kg fuel limit will be irrelevant since very little fuel is burned over one lap. The driver will therefore be able to use 100% of the allowed fuel flow and the entire energy budget from the battery store for his qualifying lap. However, should he choose to use all the energy on one lap, he will not be able to complete two flat out timed laps and will instead have to wait until the store recharges. This will lead to some even tenser sessions and a number of different strategic calls.