Renault presents EOLAB, a new prototype which explores ways to deliver ultra-low fuel consumption. It boasts NEDC combined cycle consumption of 1 liter/100km, equivalent to 22 g of CO2/km. To achieve such low figures, the designers focused their efforts on three main areas: minimizing weight, refining aerodynamics and using “Z.E. Hybrid” technology for all, a brand new initiative which permits zero emissions motoring during everyday use. The car’s shape was designed to slice through air efficiently, while movable devices such as an active spoiler and lateral vanes perform the same way as ailerons.

EOLAB’s CdA is 0.470 m² (A = 2.00 m²/ Cd = 0.235) which represents an overall reduction of 0.200 m² (around 30 percent). This lower drag coefficient results in a significant fuel consumption reduction at higher speeds. At a stable speed of 130 kph, for example, it accounts for a fuel consumption saving of 1.2 liters/100km in comparison with the benchmark vehicle.

This aerodynamic efficiency was achieved by combining several factors:

NOTE: the measure of a vehicle’s overall aerodynamic efficiency is its CdA, i.e. the vehicle’s frontal section (A) expressed in square meters multiplied by its drag coefficient (Cd). The CdA of the Clio IV, for example, is 0.670 m², which is a good average for its segment. However, CdA gains should not be achieved to the detriment of design considerations or other characteristics, such as cabin space.

Active spoiler for the EOLAB

At the same time, the aerodynamicists focused on a variety of technological solutions and innovations. EOLAB’s front bumper, for example, is equipped with an active spoiler that lowers by 10 cm at speeds in excess of 70 kph in order to restrict airflow beneath the car. Even when a vehicle is designed with a flat underbody, there are still a number of asperities that can detract from aerodynamic efficiency. 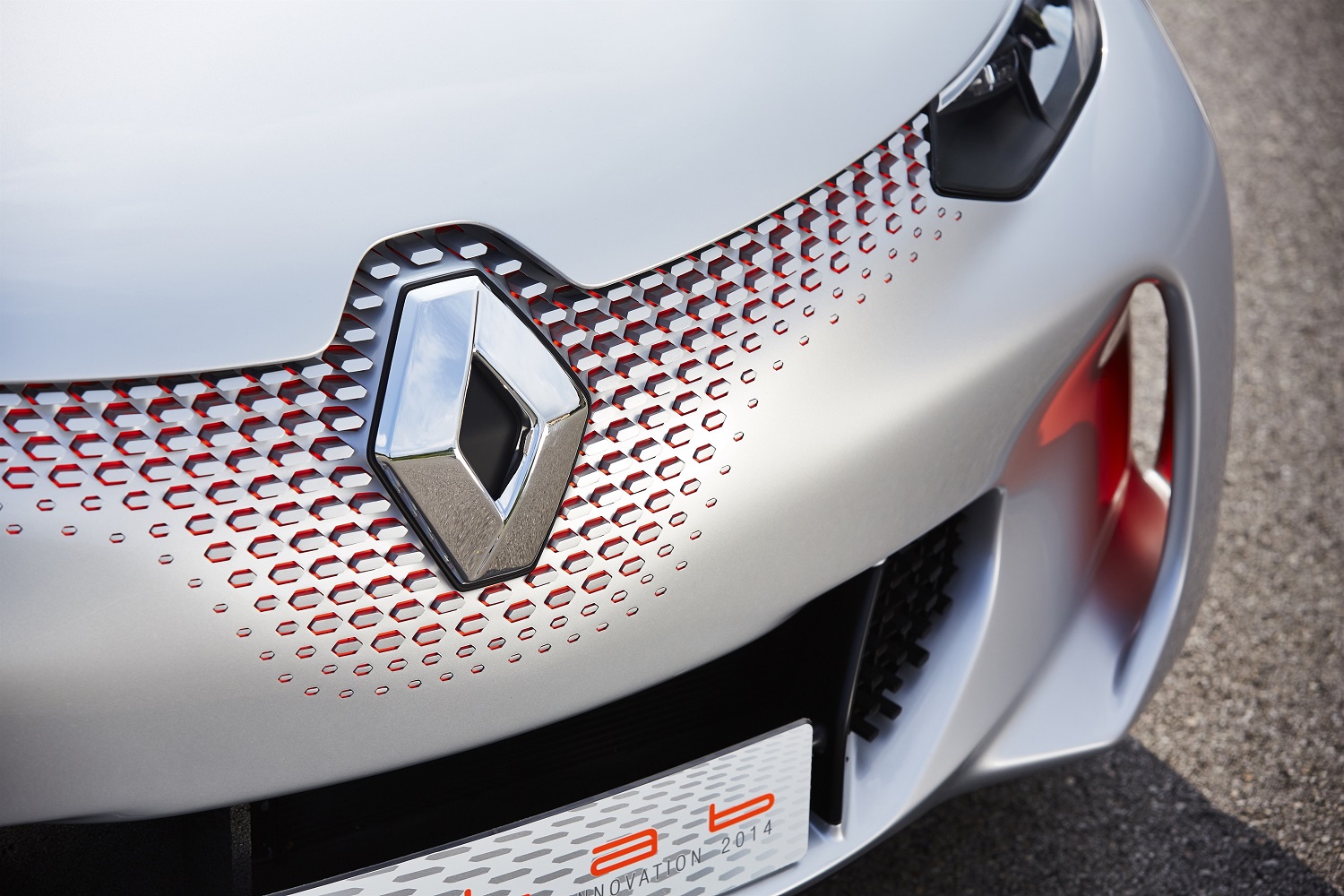 Another mobile feature of EOLAB’s aerodynamic package is the 40 cm x 10 cm vertically-positioned flaps that are visible on the rear bumper, rearward of the rear wheels. At speeds in excess of 70 kph, these flaps open by 6 cm in order to ensure that as much of the airflow as possible stays attached to the vehicle as it moves forward. Without this solution, passing air has a tendency to become detached from the vehicle’s sides too early after passing the rear wheels and this has a negative effect on drag. In the open position, airflow remains attached to the car as far rearward as possible, right to the trailing edge of the bumper. “These flaps tauten the airflow and prevent turbulence which otherwise acts as a sort of aerodynamic brake,” explains William Becamel, the aerodynamics expert who worked on the project.

The teams that worked on EOLAB took a close look at its wheels, too. In a perfect aerodynamic world, the rims would be covered and smooth. This is rarely the case, however, essentially for design – and brake cooling – related reasons. An ingenious system was consequently designed whereby the rims are covered whenever the brakes do not need to be cooled, thereby reconciling design and aerodynamic efficiency considerations. The system is controlled by a temperature sensor built into the rims.

Tires designed for aerodynamics by Michelin

To further perfect EOLAB’s aerodynamic performance, it is fitted with particularly narrow, 145 mm-wide tires. That’s 40 mm narrower than the smallest tires available for the Clio IV. Michelin and Renault’s designers worked on the tread pattern to give a visual impression of width, while the sidewalls were designed to exude an impression of light weight. At the same time, tire supplier Michelin optimized the casing and tread to minimize rolling resistance while maintaining adapted levels of safety and performance. The tires’ rolling resistance is 15 percent lower than those of the Clio IV. These tires are also lighter, and their profile has been honed to minimize drag.

Michelin’s engineers have designed a tire in the entirely new 145/70 R 17 size, specifically for the Renault prototype, a model that seeks to deliver superior aerodynamics and energy efficiency. A narrow tire with a long diameter simultaneously improves performance in several areas:

The tire’s unusual size contributes to the overall styling of the prototype, whose sporty profile and performance features are accentuated by the new tire markings, using Michelin Premium Touch technology to give the markings and tire design a striking, velvet appearance while at the same time reducing the tire’s aerodynamic drag.

I think that this kind of demonstrator is not hard to build as there is no compromise with cost, industrialization, after-market aspects. Do you think that Renault will go further in this prototype study and make it become a production car?